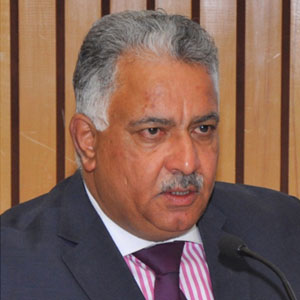 Anil Malhotra is a practising Advocate in India since September 1983. He attained Bachelor of Science (1980) and Bachelor of Laws (Professional) (1983) degrees from Panjab University, Chandigarh & an LLM degree from the University of London, London in 1985. He studied Comparative Family Law at London School of Economics besides Law & Society at School of Oriental & African Studies.

Well conversant with independently conducting civil, service, company, matrimonial and allied litigation at High Courts over India and Supreme Court. From 1986 to 1992, he taught civil procedural laws and matrimonial remedies for six years as a part-time lecturer at the Faculty of Laws, Panjab University, Chandigarh. Worked at High Court as Additional Central Government Standing Counsel from 1997 to 2000. Have represented substantial number of private clients for the past three decades by filing and defending independent petitions at the High Court and other Forums in matters relating to constitutional, civil, company, criminal, consumer and family disputes litigation. Has rendered substantial assistance as Amicus curiae with reported judgments on various issues of public law importance. Representing Government of Punjab probono, as counsel in defending vires of Punjab Travel Professionals Regulation Act, 2012, at the High Court since 2013.

For over 35 years, he continues to act as an Indian expert to render reports in foreign courts on appointment by the Bench in overseas jurisdictions. Conducts matters in Indian Courts pertaining to interpretation and application of foreign Court Orders regarding divorce decrees, child abduction, custody, maintenance, adoption, surrogacy and family related issues of Non-resident Indians (NRIs).

As Chairperson, Task Force, Policy Procedures, Resolution and Grievances of NRIs, he has authored five reports for the Government of Punjab and has assisted in the enactment of The Punjab Compulsory Registration of Marriages Act, 2012 and Punjab Travel Professionals Regulation Act, 2012. He is an Advisor on NRI issues to the Government of Punjab & is a member of Nodal Cell for NRI Affairs in UT, Chandigarh. On January 29, 2007, he was elected to the International Academy of Family Lawyers. He is the Indian Representative of the Family Law Committee of International Law Association and has lectured at National Judicial Academy, Bhopal on 11 programmes and spoken at Chandigarh Judicial Academy. He has authored four publications on NRIs issues for the Government of Punjab.

Has conducted number of litigations on inter country parental child removal matters and has persistently proposed, debated and discussed need for India to sign the Hague Convention on Inter parental child abduction, 1980. As amicus curiae, his report on inter country parental child removal, forms part a Punjab and Haryana High Court judgment making a reference to the Law Commission of India, to recommend that India needs to consider signing the Convention. Handled litigation & campaigns for India to enact a law on surrogacy arrangements in India. Intends to persuasively pursue enactment of Indian legislation on these subjects.

On 25 April 2017, Co-opted by the Punjab and Haryana High Court, Chandigarh as a Member of the Committee, constituted by the Ministry of Women and Child Development, Government of India to examine in detail the legal issues involved and give recommendations on resolving problems of parents and children involved in issues relating to inter parental / inter country child removal while examining the draft Protection of Children (Inter-Country Removal and Retention) Bill, 2016, whose report was submitted to Government of India on 21 April 2018.