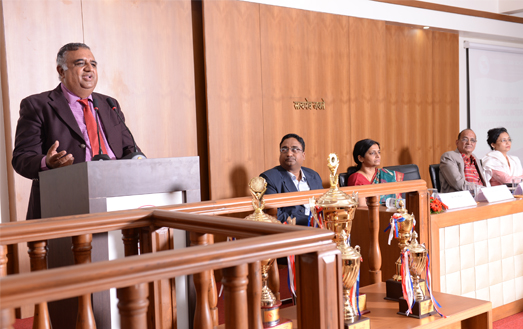 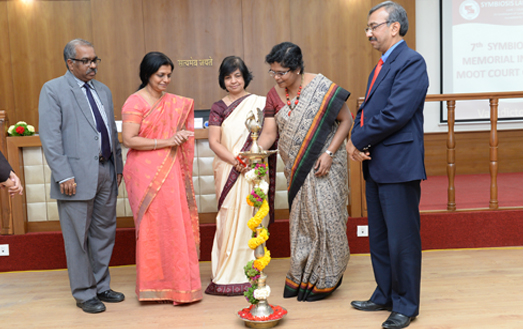 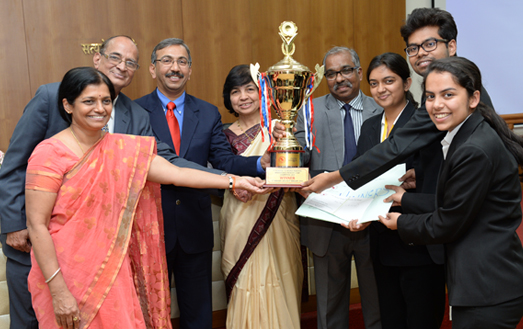 The inauguration ceremony of the three-day legal battle witnessed the participants from 48 leading Law Schools across the country. An International team from the Faculty of Law, University of Chittagong, Bangladesh lead by their Prof. Asma Bint Shafiq, was also the part of the prestigious competition.

In his inaugural address, Dr. Raj Hirwani spoke about the importance of the Intellectual Property Rights and how it is a source of income and wealth on a global platform. He gave a relatable example of Bill Gates, and expatiated on how he developed his empire, not on the basis of oil fields or gold mines, but an idea, which he turned into an innovation mentioning how these are the innovations which fall under the mandate of IPR. Mr. Hirwani emphasized upon the fact that in India people consider knowledge as a public property and thus believe in sharing it but in this Patent Regime, we have to understand the fact that it is no more a public but a private property and hence needs to be carefully patented.

In her welcome address Dr. Shashikala Gurpur, extended a warm welcome to the dignitaries and the students. She congratulated the participants for their outstanding performance and excellent advocacy skills displayed during the competition. She also appreciated all the teams for their efforts in maintaining the standards of the competition and setting up new bars.

Smt. Prathiba Singh, Senior Advocate High Court of Delhi, gave her insightful opinion on the developmental timeline of the facilities and legal education provided by institutions in this age and day. Furthermore, with respect to the moot problem, she spoke about how it was an impressively drafted problem which included all the recent developments and judgments of IPR. Ms. Singh spoke about the sentiments she felt towards Pune, recalling the close relations she has here and the pleasing impression the new sprawling campus of SLS, Pune had on her. She commended the students for their courageous display while competing and their researching skills as they had scrutinized each minor detail and were well read, way beyond their years. Ms. Prathiba Singh then urged the students to try and explore the litigation field further as it is a greatly satisfying field and for the future she advised them to work hard and keep excellence as their aim rather than running behind money.

Shri A. Mariarputham, was highly impressed by the enthusiasm shown by each participating team. He felt the need to go back to school and brush up his knowledge after seeing the students put up such well-researched arguments and their vigor. Sharing anecdotes from his early years in the legal profession, he inspired and prepared the students to handle the hiccups in the profession.

Dr. (Smt.) Shalini Phansalkar Joshi addressed the audience about her pleasant association and memories with SLS, Pune. She too encouraged the students to join the field of litigation as it has more to offer than it seems. While expressing her enthralling experience to be able to witness both the sides of the arguments, Dr. (Smt.) Shalini Phansalkar Joshi spoke about the complexity of IPR as a subject and appreciated the participants for their arguments. She spoke inspirationally about the legal profession where one not only fights for the people but also for the cause. It is not just the merits of the case but the skills of oratory, presentation and court decorum that helps you win a case, she said. Moreover, Dr. (Smt.) Shalini Phansalkar Joshi spoke about the rich culture of law as the first parliament comprised 1/3rd of legal experts. The father of nation, Mahatma Gandhi, the maker of Constitution, Dr. B R Ambedkar were all lawyers. Emphasizing upon the role of ethical values and integrity in the legal profession she said that at times we may lose the “Case, Client and also the Court” but in no case should we ever compromise with the integrity.

Adv. Shri R. Murlidharan, announced the much awaited results. The Best Memorial went to Nikhil Saini, Aastha Trivedi and Nikhil Bansal, NLU, Odisha with a cash prize of Rs. 10,000 and a trophy. The Best Advocate & 2nd Best Advocate awards were bagged by R. Venkatesh, WBNUJS, Kolkata and Gaurav Sharma, NLIU, Bhopal with a trophy and cash prizes of Rs. 7,000 and Rs. 4,000, respectively.

Deputy Director Prof.Dr. Bindu Ronald delivered the vote of thanks.