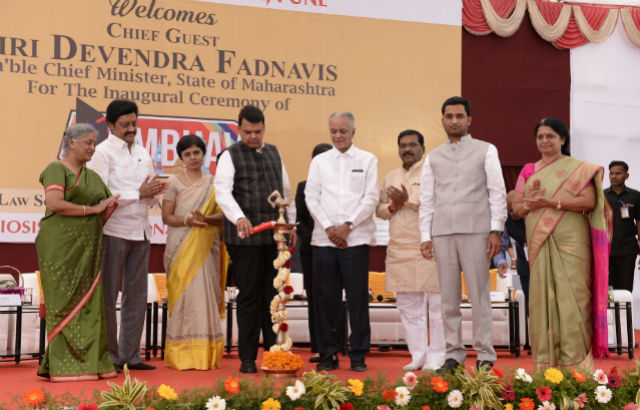 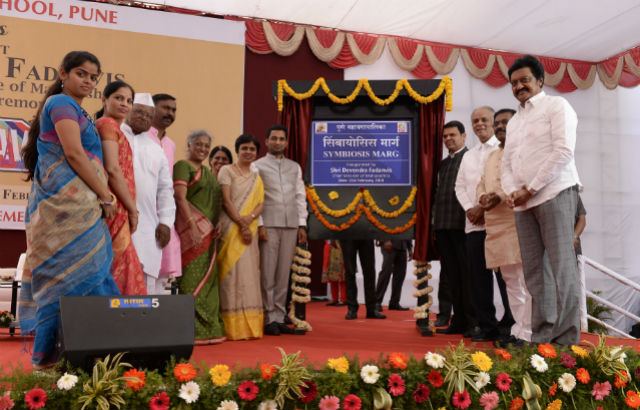 Theme for this edition of the festival is ‘Global Village’ reflecting the essence of Symbiosis International (Deemed University)’s - Vasudhaiv Kutumbakam, the world is one family. Program began with Ganesh Vandana by Prof. Asawari Abhyankar.

Dr. Shashikala Gurpur, Fulbright Scholar, Director, SLS, Pune, Dean, Faculty of Law, SI(DU) , in her opening address, thanked the Hon’ble Chief Guest for his presence at the decennial celebration of Symbhav. She apprised the audience of SLS, Pune’s glorious journey as one of the leading law schools in India which today, stands at par with the National Law Schools of the country. She delved into the magnificence of Symbhav and the precision and simplicity with which it is taken forward by students. Dr. Gurpur shed light on one of Symbhav’s biggest highlights - Law Theatre, the brainchild of Prof. Dr. S.B. Mujumdar, Chancellor, SI (DU). This time it will showcase 'The Fallen Beauty' a dramatization of Budhadev Karmaskar Vs. State of West Bengal, 2011 case on 22nd Feb 2018, at 3.30 pm at SVC Auditorium. The play addresses issues pertaining to sex workers and the violation of their human rights. She said, “A student driven festival like Symbhav not only celebrates the creativity but also instills among students a sense of responsibility which drives them to become future leaders.”

Dr. Vidya Yeravdekar, Pro Chancellor, SI (DU) in her welcome address thanked Shri Devendra Fadnavis for gracing the occasion, as it shows his commitment towards the youth, their interests, and their development.

Mr. Kartikey Chouhan, Convenor, Symbhav’18 and President, Student Advisory Board, 2017-18 delivered a very inspiring speech. “Humein iss desh ka karz utarna hai”, his speech reflected the Prime Minister’s thoughts as he urged the students to utilize their education in a manner which will benefit the nation. He reminded everyone of the global spirit which they must imbibe, a spirit where one strongly believes that the world is one family, echoing the principle on which SI(DU) stands, Vasudhaiva Kutumbakam. Prof. Dr. S.B Mujumdar, Chancellor, SI(DU), then felicitated the Chief Guest and the dignitaries on the dais following which, the auspicious lighting of the lamp ceremony took place.

Dr. Mujumdar, in his address, spoke about how the Hon’ble Chief Minister’s speech would be the last lecture for the students in their final year, and how they should savour this opportunity. He congratulated the Maharashtra government for their “Magnetic Maharashtra” initiative which aims at achieving higher investments in the state, thus ensuring, over all development.

The dignitaries on the dais unveiled the “Symbiosis Marg” plaque, thus immortalizing the institution and its virtues.

The Hon’ble Chief Minister of Maharashtra, Shri Devendra Fadnavis began his speech by emphasizing how education is multi-faceted and collectively includes aspects of confidence, ethos and knowledge. He congratulated the students and the institute for displaying similar virtues. Then he spoke about India and its rich history, and how our culture and thought process is such that we manage to gain the best out of the worst of circumstances. While talking about the multiple invasions that India was subjected to, he spoke about how we managed to assimilate the best of the thoughts and knowledge that the foreign tyrants brought with them and continued to develop as a society. He drew everybody’s attention to Swami Vivekanda’s famous speech delivered at the Parliament of Religions, where the Hindu monk referred to the gathering as his American brothers and sisters, thereby initiating a sense of comity in an environment plagued by rigidity. He compared the different faiths and culture of an individual to rivers which ultimately merge together to form a sea, the ultimate truth. He urged everyone to let go of their differences and embrace the motto of Vasudhaiva Kutumbakam. Shri Devendra Fadnavis then commended the theme of Symbhav’18, Global Village, for it embraces fraternity, a principle enshrined in the Indian culture. He then encouraged the youth to work on their holistic development so that India can translate its population into a credible and reliable workforce which in the future will prove to be our most coveted asset. He concluded by expressing his desire to witness India excel in all fields across the world.

Dr. Rajani Gupte delivered the Vote of Thanks and expressed her gratitude towards all dignitaries present on and off the dais, professors and students of Symbiosis Law School, Pune.

Symbhav 2018 is hosting approximately 3000 participants across India including 20 outstation (4 National Law Schools) and one international team (New Zealand). 10th Edition of Symbhav will host 55 Legal, Sports and other Cultural Events. Flagship Events of the fest include Fashion Show, War of the DJ’s, Battle of the Band, Group Dance, Mr. & Ms. Symbhav , Gear Heads, Basketball and Football.

Tenth edition of Symbhav has introduced innovations under different categories including Street Play, Stage Play, Beatboxing under Performing Arts; Funk from Junk under Creative events; Block & Tackle and Word Games under Literary/Entertainment; Lip Sync Battle under Miscellaneous; Futsal, Footvolley, Sports Essay and Sports Quiz under Sports. The legal events this time will witness an innovative event, Extempore Moot in addition to the other events such as Client Counseling, Mediation, Negotiation & Judgment Writing.

As usual, Symbhav 2018 will also showcase an ensemble of curios, crafts and cultural exhibition by prison inmates, self-help groups & NGOs such as Maher representing the ethical core of SLS, P’s Institutional Social Responsibility. Pet adoption drive shall also be the part of Symbhav.

The other major attraction of Symbhav 2018 are the Pronites starring Farhan Akhtar with his band playing for 90 Minutes on 23rdFebruary, Varun Thakur the famous Standup Comedian & The Local Train- Band on 24th February and Candice Redding & Zaeden- International DJs on 25th February.