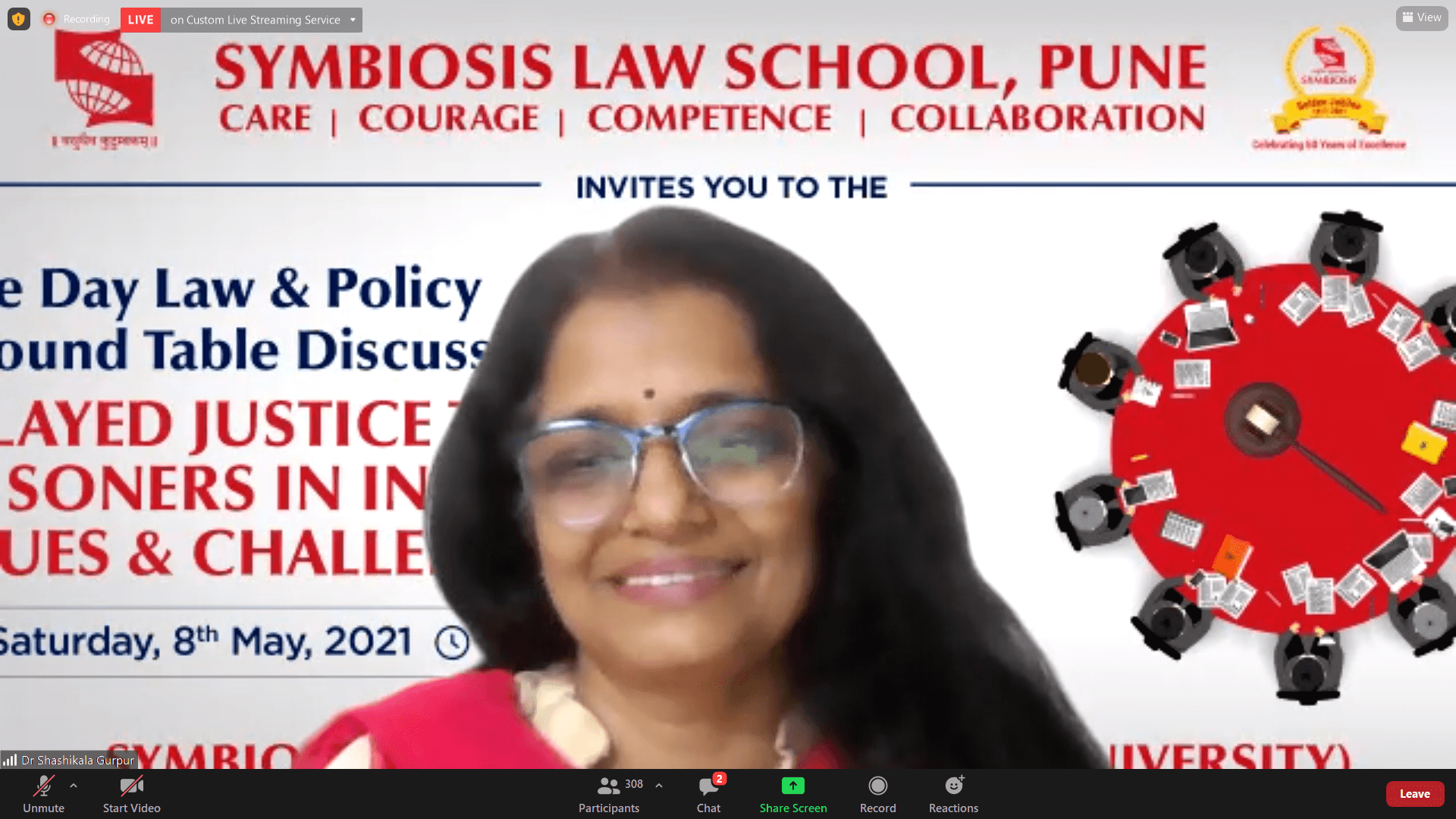 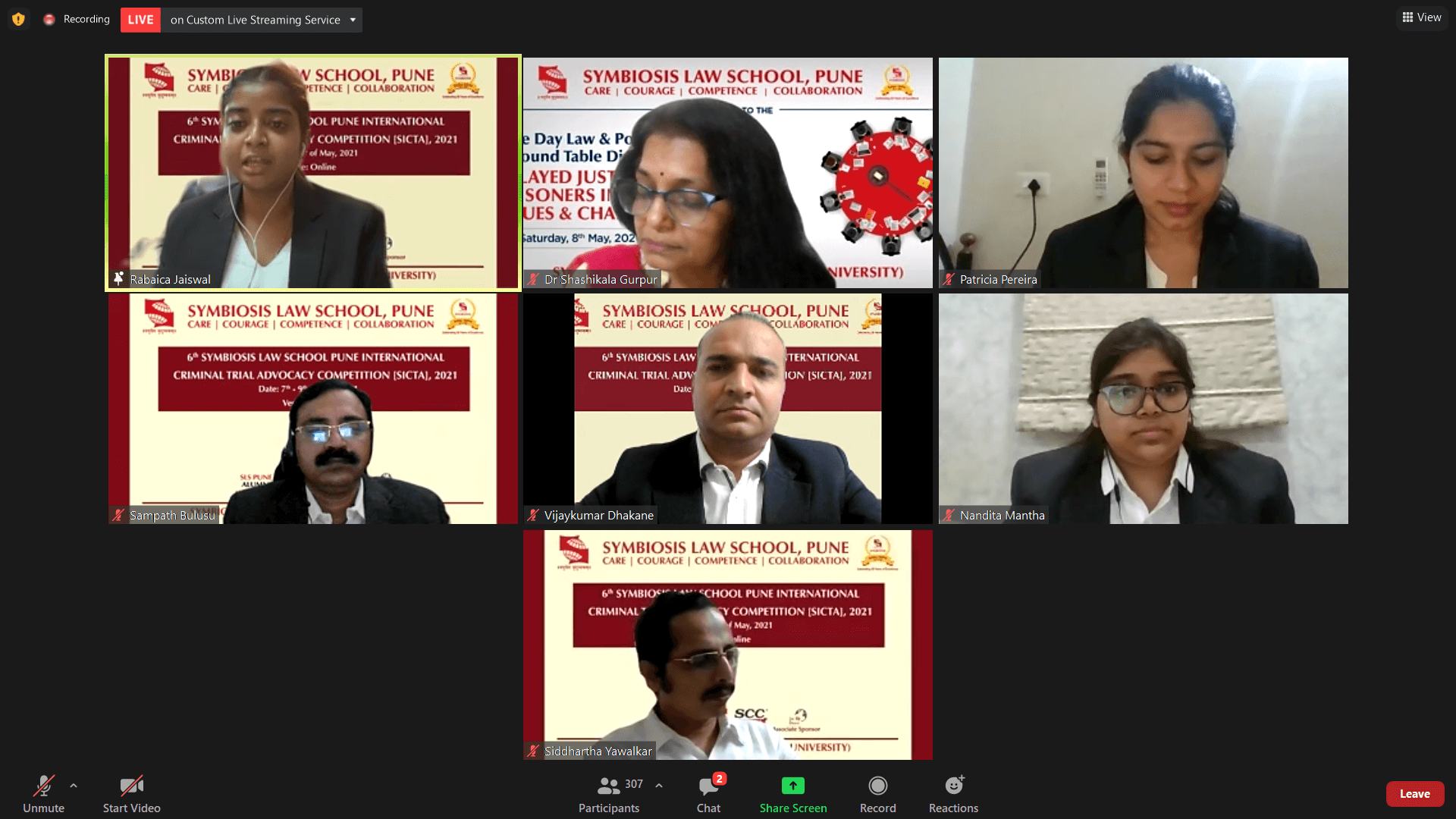 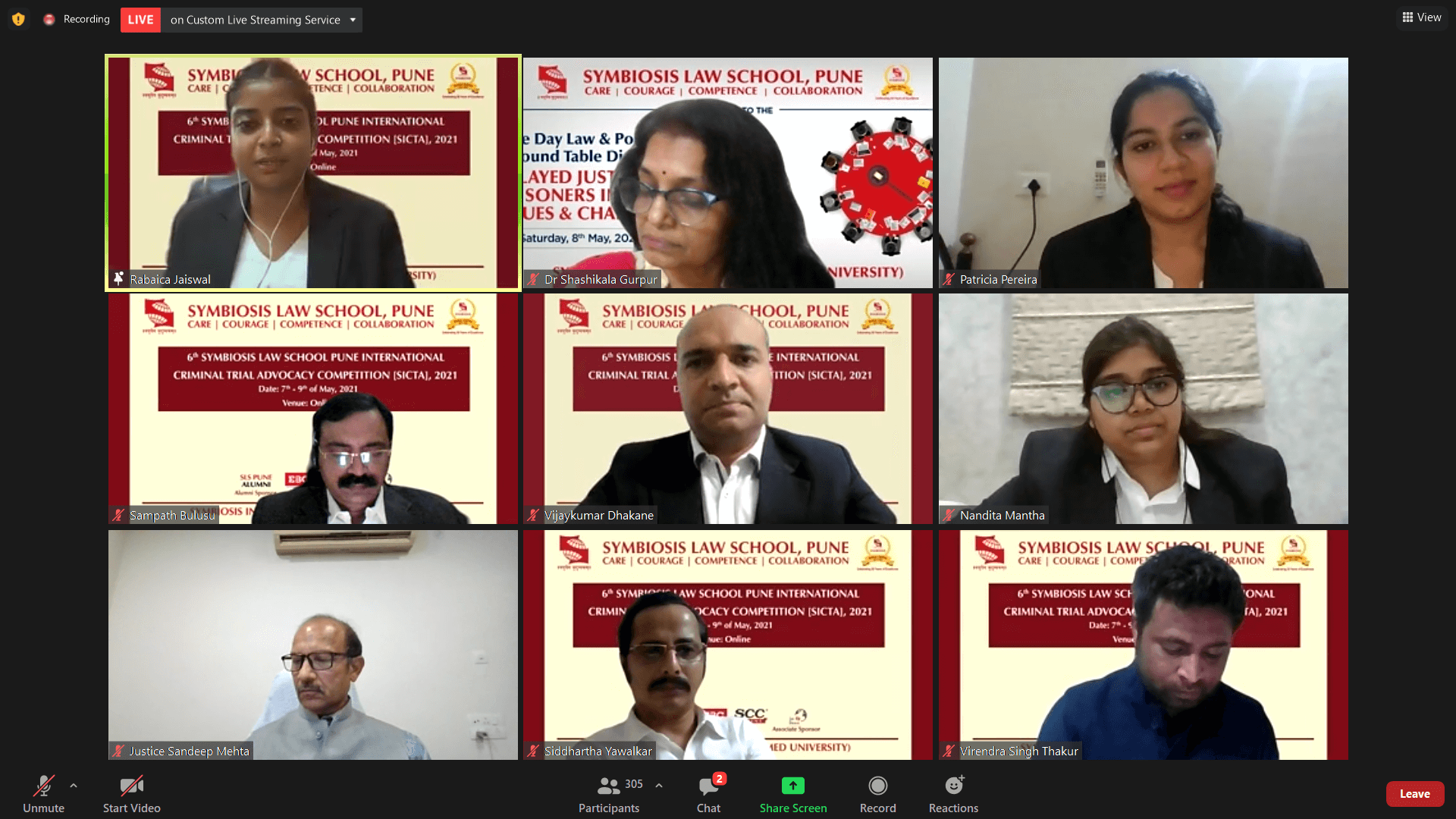 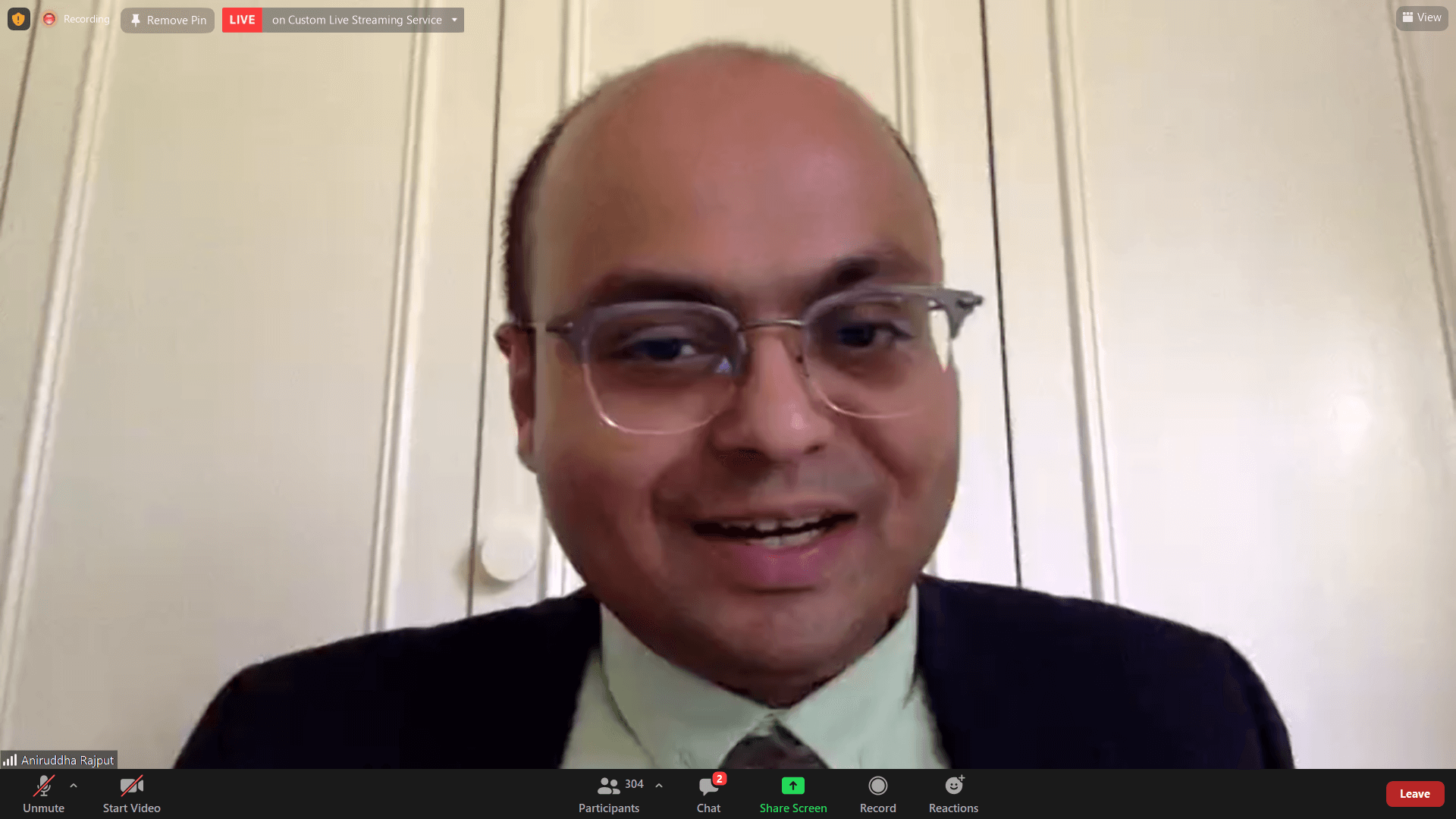 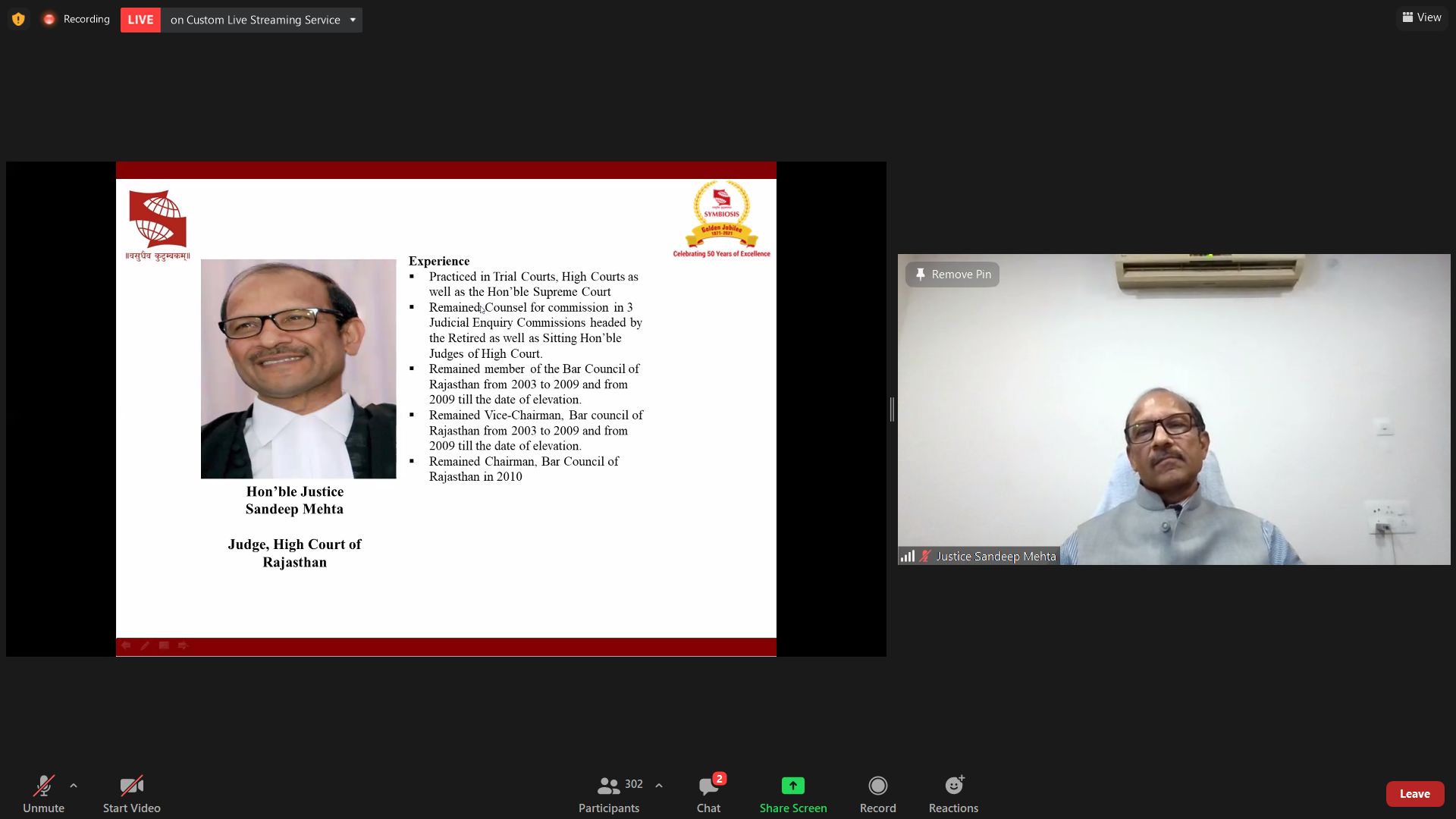 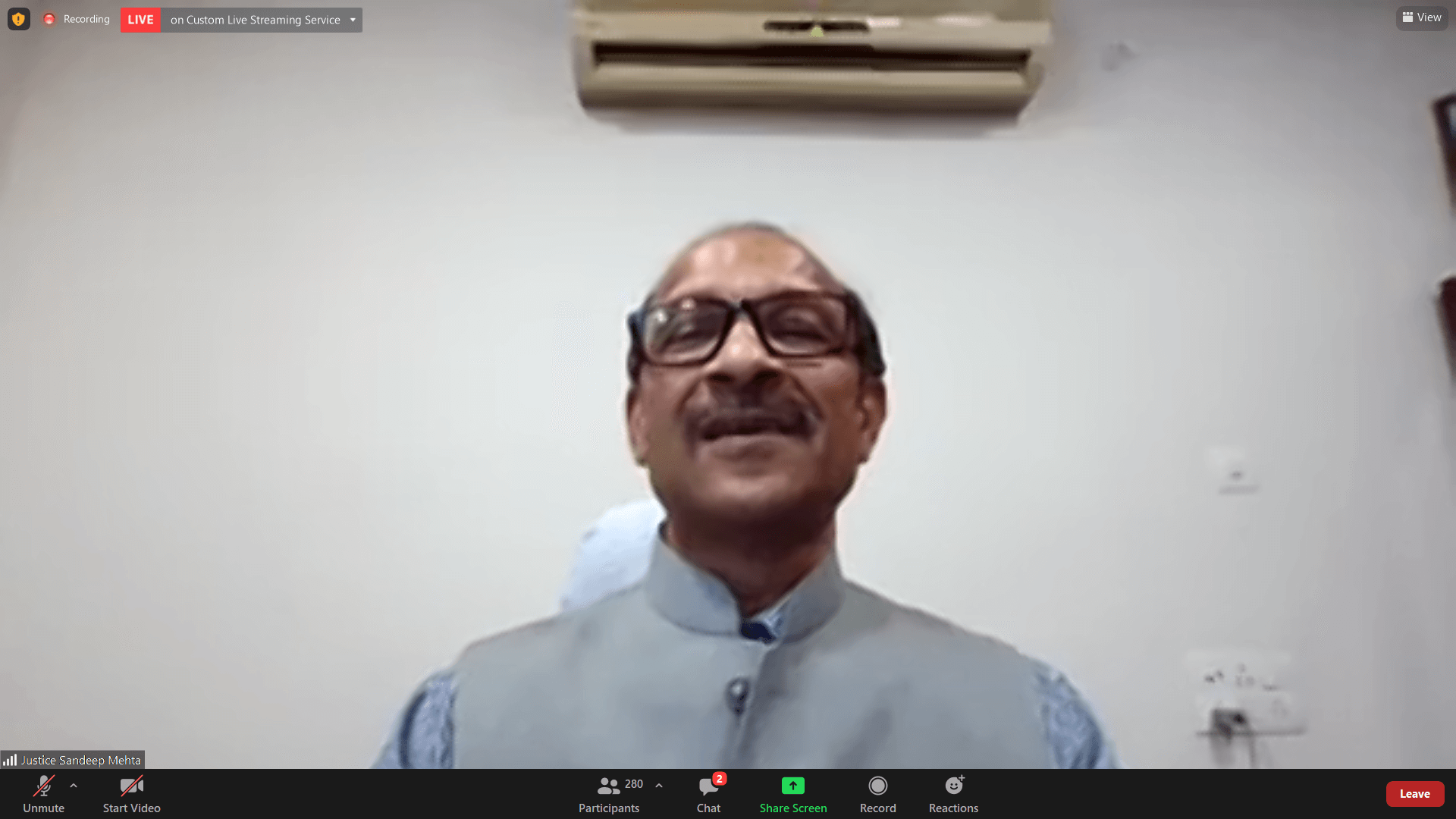 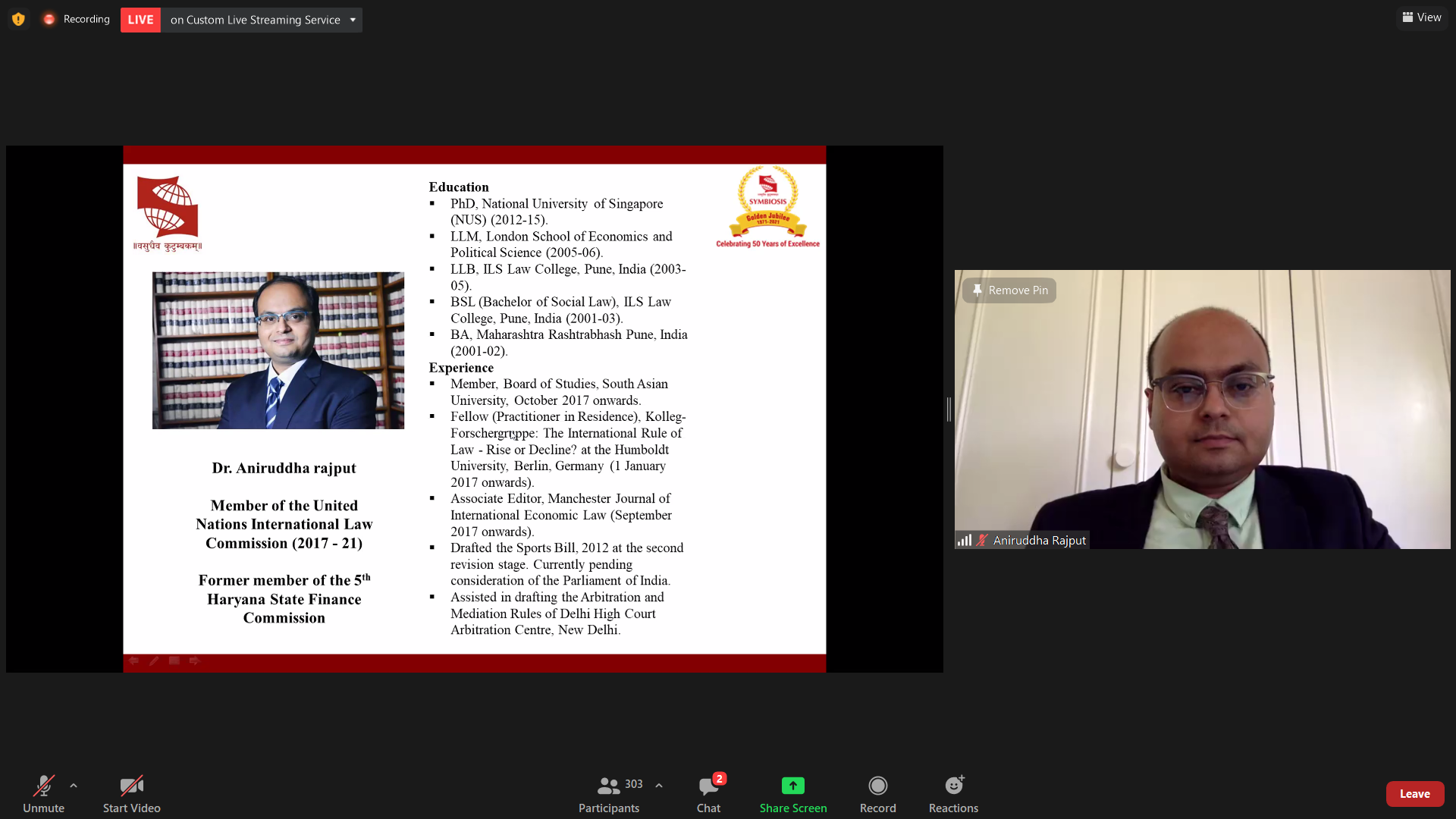 Dr. Shashikala Gurpur, Fulbright Scholar, Dean, Faculty of Law, SI(DU), Director, SLS-P delivered the Welcome Address at the Inaugural Ceremony on 7th May. Dr. Gurpur observed that hosting the trial advocacy moot served a two-fold purpose – “Firstly, getting the attention of brilliant students into trial advocacy skills. Secondly, instead of churning out students for corporate machinery;importance must also be placed onbringing in justice workers who would fly the flags of Symbiosis high.” Dr. Gurpur further noted that- “Here is SICTA amid all the pain and gloom that we are surrounded by, representing youthful energies and not letting the flame of hope die.” She concluded her address by wishing the participants the very best of luck.

The esteemed Chief Guestfor inaugural Sri. Justice J. Chelameswar, Former Judge, Supreme Court of India. Former Chief Justice of High Court of Kerala and Guwahati, began his address with the observation that, the legal system desired by modern civilization is the one wherein false accusations are unearthed, prosecution is done on the basis of proper material and impartial inquiries are carried out. He noted that in reaching for such a system in India, the conviction rate has become very low and has posed a serious flaw to the criminal law enforcement system. Justice Chelameswar inspired the student attendees by tracing his own career as a lawyer and public prosecutor. Based on his experience, he advised- “Look into the evidence you require, look into your skills, help the society and improve the efficiency of the system”. He concluded his address by remarking that a competition like SICTA certainly developed the aptitude and skill set of the future generation of lawyers. He conveyed his best wishes to all the participants.

The Inaugural Ceremony ended on a positive note as Dr. Bindu Ronald, Deputy Director (Academics), SLS-P delivered the Vote of Thanks.

The 6th Edition of SICTA witnessed participation from 15 pan-India colleges, including an international team from the Kathmandu University School of Law, Nepal. The participants went through three preliminary rounds before advancing to the semi-finals & the final. The event was witnessed by over 400 national and international attendees.

The Valedictory Ceremony was held on 9th May 2021. Dr. Shashikala Gurpur delivered the Welcome Address and discussed SLS-P’s merits in striving to go beyond the regular classroom learning to provide a diversified legal exposure. She declared that every law student is a warrior for justice who ought to use their platform to stand up for justice, and emphasized the role of Law School in preparing students for the global legal forum. She also highlighted SICTA’s monumental role in fostering service competency and lawyering skills in participants. Lastly, Dr. Gurpur congratulated the Student Bar Association for the organisation of the tournament in an effective manner.

Following the Welcome Address, Advocate Sampath Bulusu, General Manager and Head (Legal), Shell Hazaria& Port was called upon to address the attendees. He spoke about his great personal interest in the subject of Criminal Law, despite being a practitioner in the corporate field.

Subsequently, Mr. Aniruddha Rajput, Member of the UN International Law Commission was invited to deliver the Guest of Honour address. Mr. Rajputcongratulated all the participants, and appreciated their legal nous and ability throughout the tournament.He remarked,“A lawyer at all times in his career is a work in progress, and must always be open to learning.”

Hon’ble Justice Shri. Sandeep Mehta, Judge of the Rajasthan High Courtdelivered the Chief Guest’s address. Justice Mehta highlighted the significance of a lawyer’s presence in trial courts where innumerable victims suffer due to incompetence and inefficiency. He discussed his experiences as a lawyer- in building client relationships, preparing briefs and also gave the participants tips on how to respect clients and respond to queries from the Bench. He further emphasized the need to be thoroughly prepared with all the facts, so as to think on one’s feet during examining witnesses and arguing a case. Justice Mehta concluded his speech with an impassioned plea to the students to be champions of justice and always fight for human rights in their practice.

The 6th Edition of SICTA, 2021 ended on a successful note as Prof. Kshitij Naikade, Deputy Director (Administration), SLS-P, delivered the vote of thanks.