ROLE OF JUSTICE, GENDER, ETHICS AND SPIRITUALITY IN CONFLICT RESOLUTION 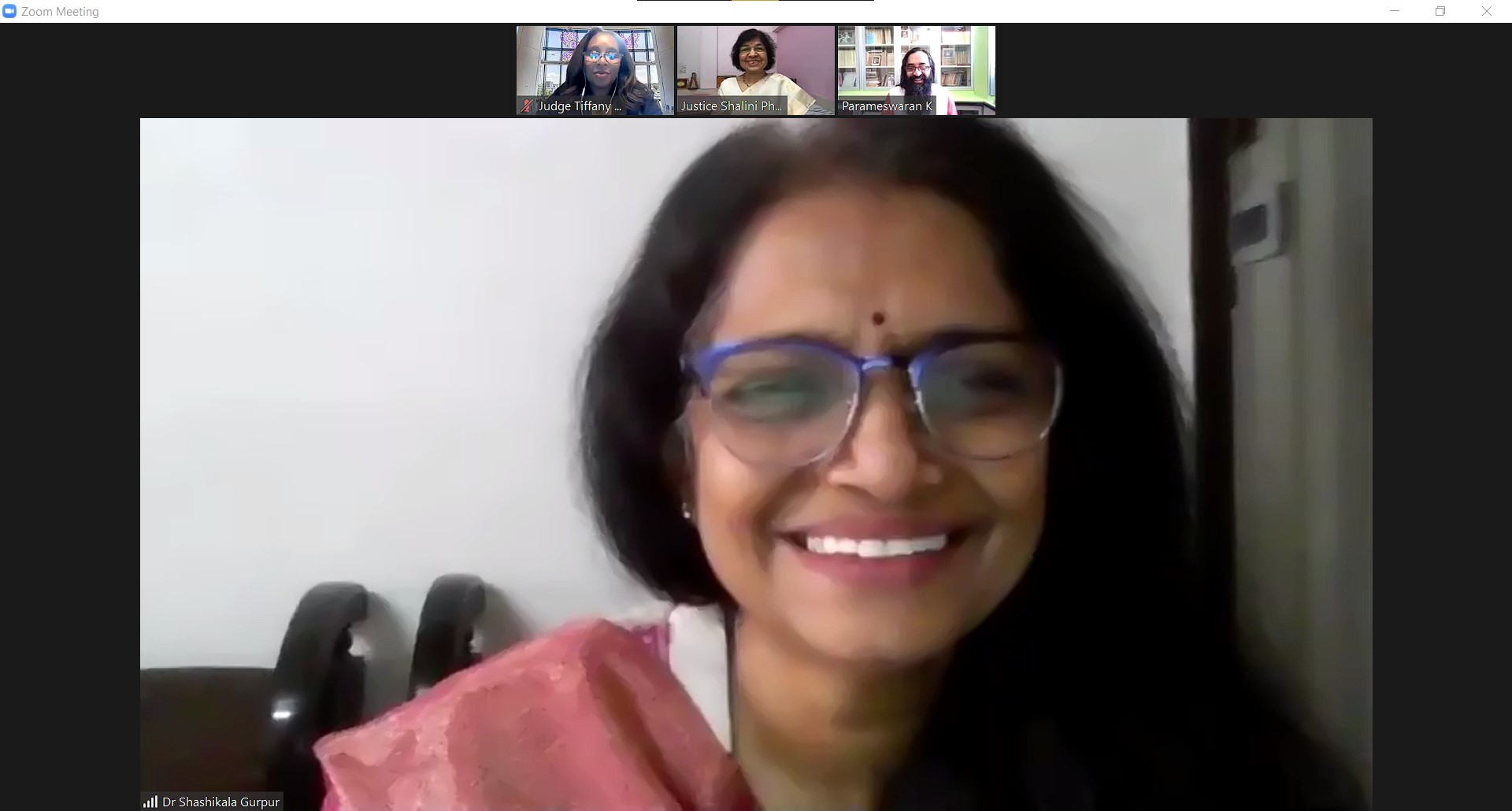 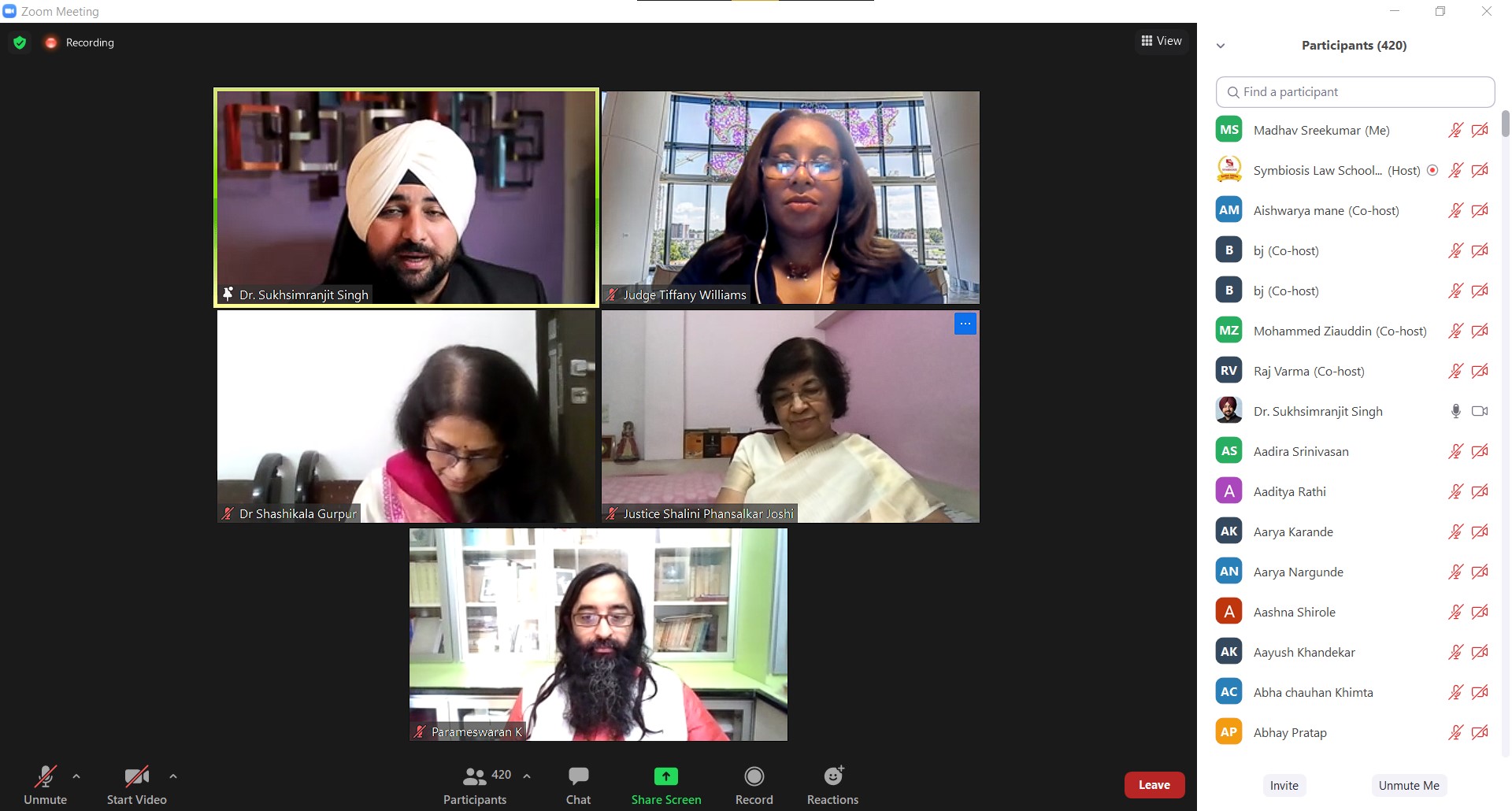 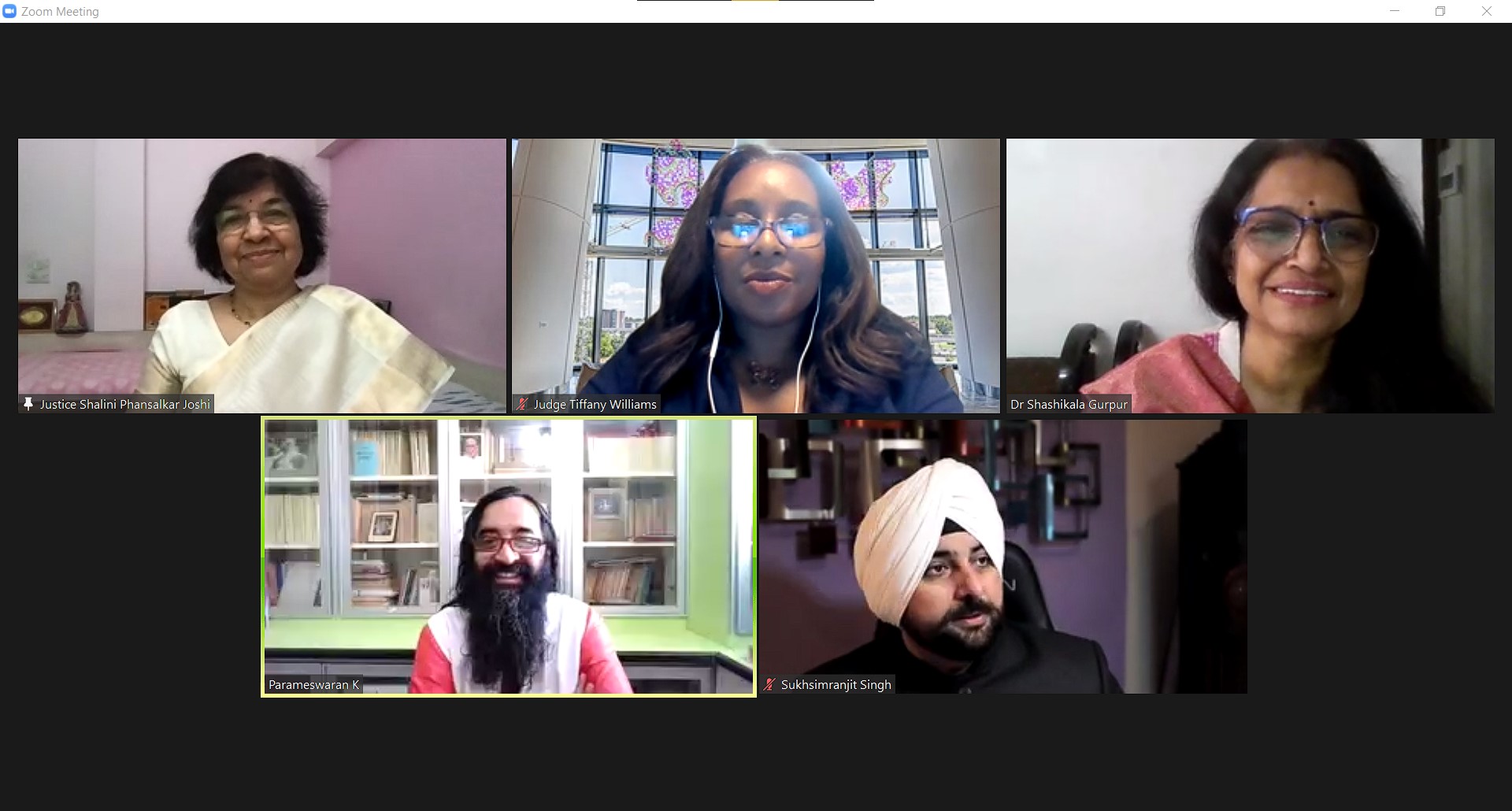 Symbiosis Law School, Pune (SLS-P), a constituent of Symbiosis International (Deemed University) organized a Webinar on the topic, “Role of Justice, Gender, Ethics And Spirituality in Conflict Resolution” on May 11, 2021. The webinar was held on the video conferencing platform ZOOM at 10.00 AM IST.

Dr. Shashikala Gurpur, Director, Symbiosis Law School, Pune, Dean, Faculty of Law, SIU, delivered the Welcome Address and introduced the theme. Dr. Gurpur highlighted the status of conflict resolution and how the pandemic became an “opportunity for soul searching”. Dr. Gurpur further elucidated on the sacredness as an essence of the Indian Justice System. She thereafter opened critical questions to the panelists and attendees such as, is Conflict Resolution about Conflict Prevention?; can Gender be considered an ignored factor or a strengthening factor?;and why is the anatomical difference between people made into a negative hierarchical environment? Dr. Gurpur concluded her address by stating that there is a need to find plurality amongst the inconsistencies in different systems.

Judge Tiffany Williams (Retd. Administrative Law Judge, Associate Director for Advocacy Empowerment and Faith, Faculty Advisor, Women’s Legal Association, Caruso School of Law), delivered her address on the topic, “The Role of Gender in Conflict Resolution.” She pointed towards the growing importance of Alternative Dispute Resolution and role of gender in conflict resolution. She opined that women's historical experiences with oppression, exposure to harmful stereotypes, structural inequality, exploitation, and increased vulnerabilities to conflict enhance their abilities at Conflict Resolution. Judge Williams also remarked that women should be empowered in varied leadership roles. She said, “It is not all doom and gloom for women. There is an opportunity created due to the daily struggles to be empowered and to rise above those challenges and to develop a resilience to take that rightful place.”

Dr. Sukhsimranjit Singh, Judge Danny Weinstein Managing Director of the Straus Institute for Dispute Resolution, Associate Professor of Law, Pepperdine University Caruso School of Law gave his address on “Cross-cultural Dispute Resolution.” Dr. Singh discussed the future of conflict resolution around the world and in India, in light of the upcoming Mediation Centre in Mumbai. He elucidated on the status of Conflict Resolution in India and its historical perspective. He further stated that “There’s tremendous wisdom in the Indian civilization, culture and technology that enables us to share and use these features.” Dr. Singh analysed the differences in the conflict resolution mechanisms in Indian and American culture. He concluded with a discussion on Corporate Mediation and it’s possibility of overtaking traditional mediation in India.

Hon’ble Dr. Shalini Phansalkar Joshi, Retd. Judge, Bombay High Court delivered her address on the topic, “Role of Mediation in Family Law Disputes.” Dr. Joshi began her address with how traumatic Matrimonial and Family Dispute Resolution are for parties involved, being highly personal. She further stated that while observing the role of gender in Family Dispute resolution, “An invisible pandemic is observed in the struggle faced by women especially during these trying times.” She further elucidated the benefits of mediation and how it is a more gender-sensitive resolution process. She concluded the address stating that mediation in family disputes is far more effective than those in commercial disputes.

Dr. Shashikala Gurpur, Director, Symbiosis Law School, Pune, Dean, Faculty of Law, SIU, delivered her address on “Role of Justice and Ethics in Conflict Resolution – Experiential Nuggets.” She noted that there have been various changes in perception and attitude towards various issues of gender equality such as live-in relationships, crimes against women and virginity among others. Giving various examples of spirit justice and magical approaches, she suggested a genealogical research into rural people’s world and a collaborative hybrid model with court-based justice. Dr. Gurpur proceeded to highlight the different approaches to Non-Adversarial Justice viz, the Court Appended Models which constitute of Alternate Dispute Resolution mechanisms and Special Courts, Village Court Models, and Other Models which focus on Consensus and plurality. She stated that “There should be a therapeutic approach to dispute resolution. Counselling with a basic understanding of justice is a great interdisciplinary way towards dispute resolution.” To conclude her address, she remarked, how Alternative forms of justice helps subvert patriarchal oppressive models and the plural ways of living.

Dr. K. Parameswaran, Associate Professor of Law, Gujarat National Law University gave his address on the topic, “Role of Spirituality in Conflict Resolution.” Dr. Parameswaran began his address with the role of spirituality in conflict resolution and how spirituality is a higher consciousness, separate from mental and physical consciousness. He focused on the spiritual aspects and interpretation of Constitutional ideas of Liberty, Equality, Fraternity Justice, Dignity, Unity and Integrity. He enlightened the audience on the concept of Spiritual Justice and need to move towards spiritual justice, which is enhanced by spiritual consciousness. He enumerated instances of spirituality manifested and adopted in statutes through a humanitarian approach. Dr. Parameswaran concluded his address remarked that ideas of the constitution can be achieved by individually exploring the domains of consciousness from within.

An insightful Question-and-Answer session followed the discussion and was moderated by Professor Raj Verma, Symbiosis Law School, Pune. The Webinar was executed by Ms. Aishwarya Mane, Ph.D. Research Scholar under the guidance of Dr. Shashikala Gurpur. The session ended on a successful note as Dr. Bindu Ronald, Deputy Director, Symbiosis Law School, Pune, delivered the Vote of Thanks.