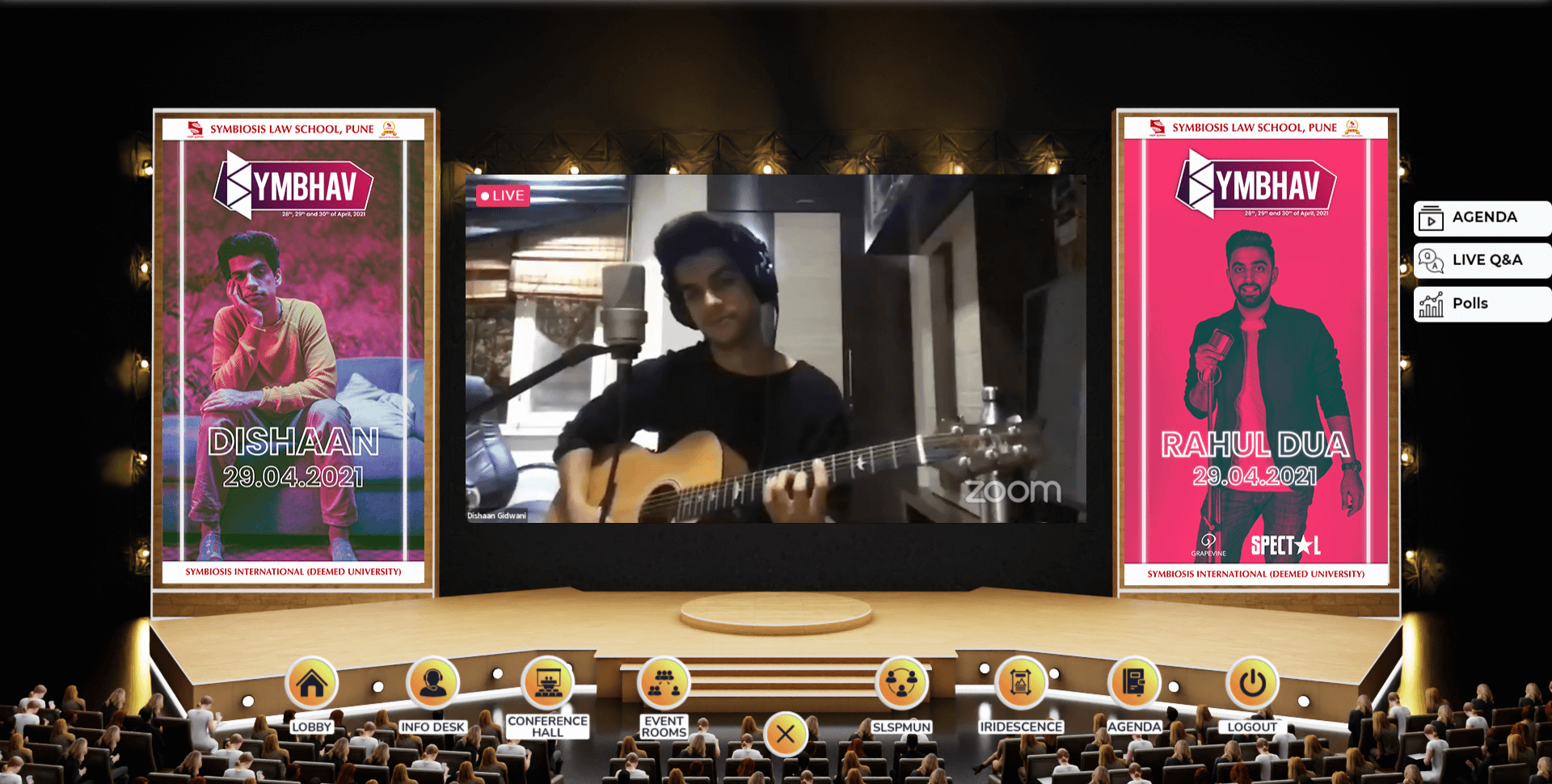 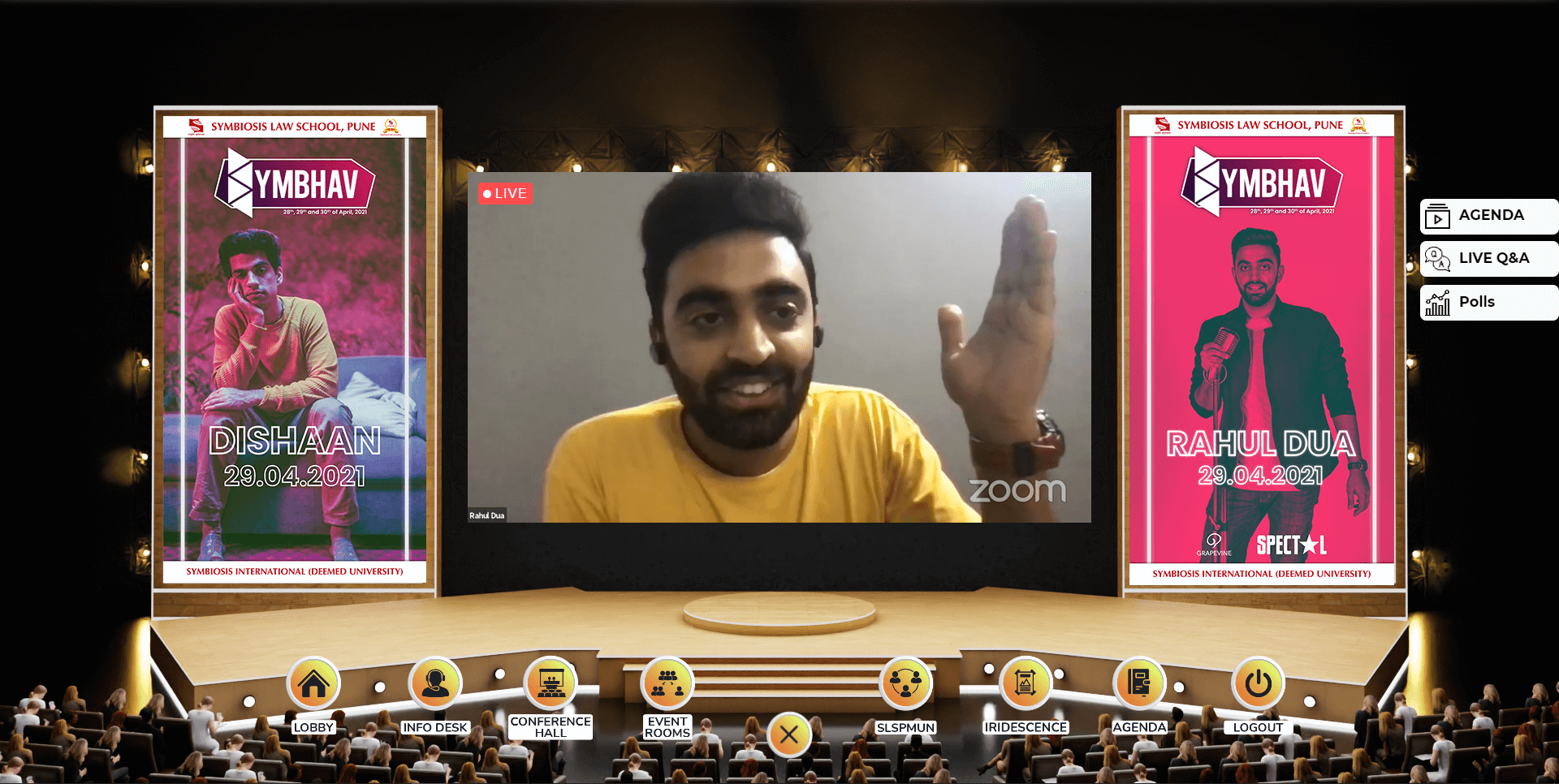 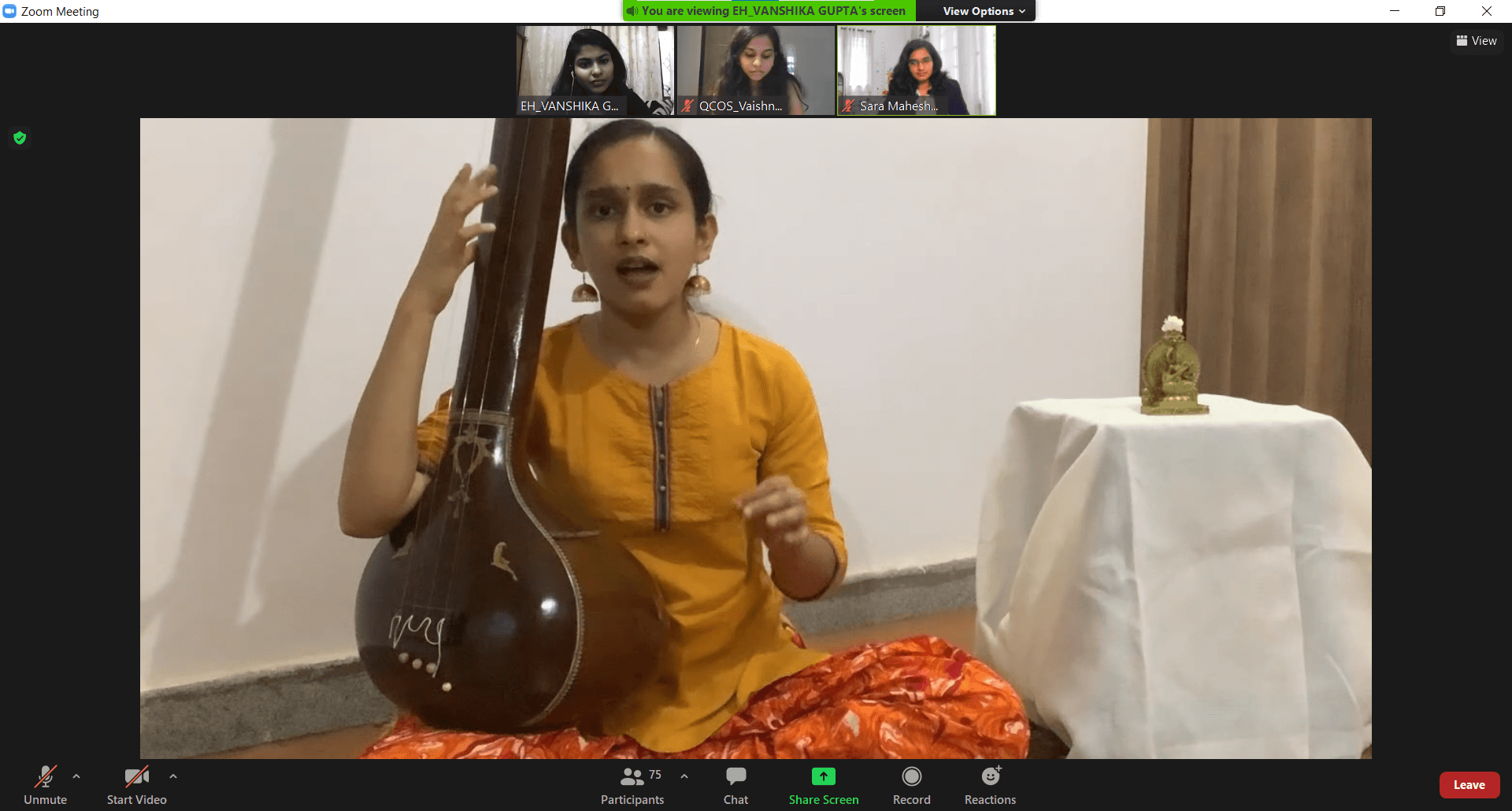 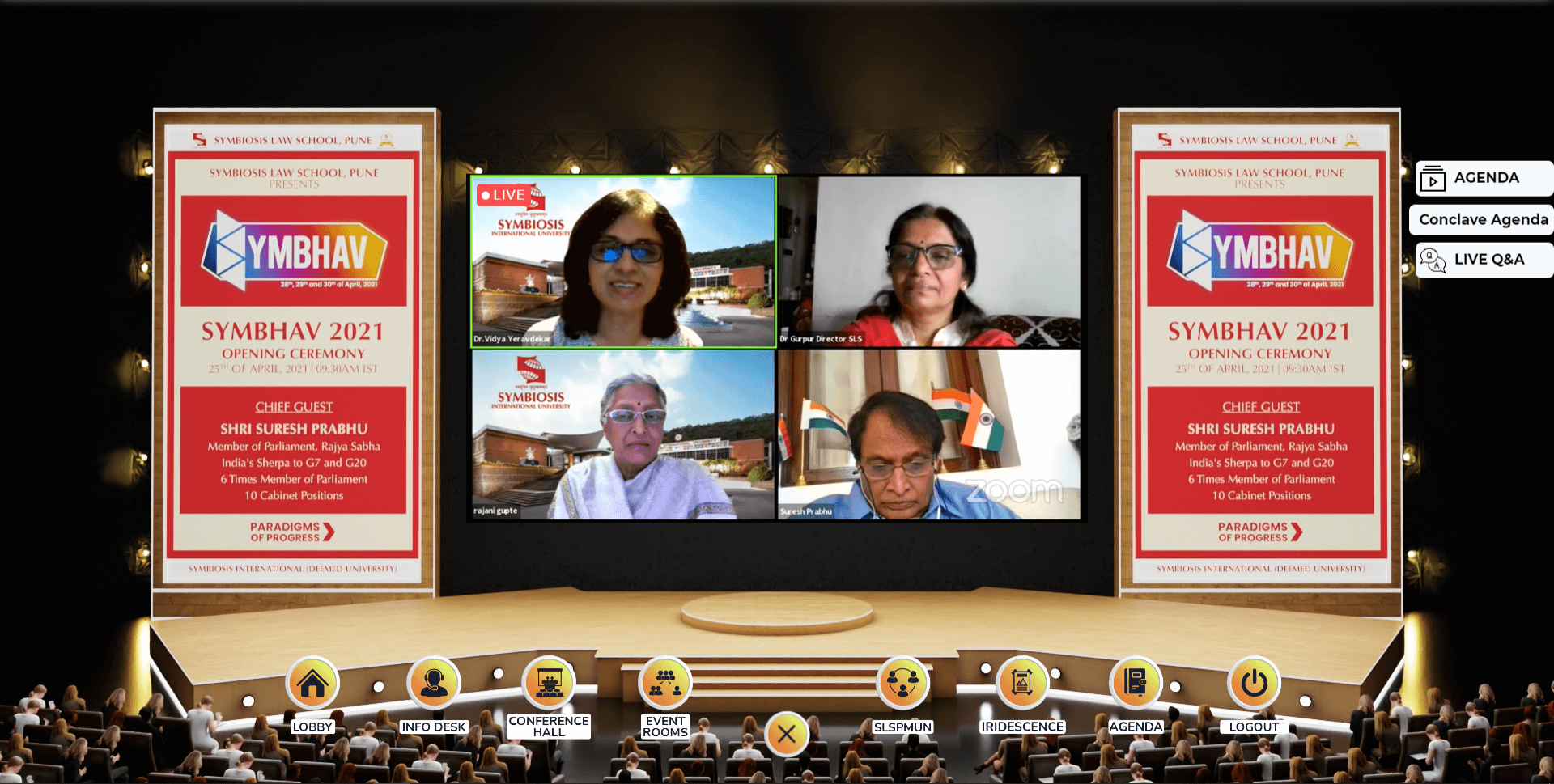 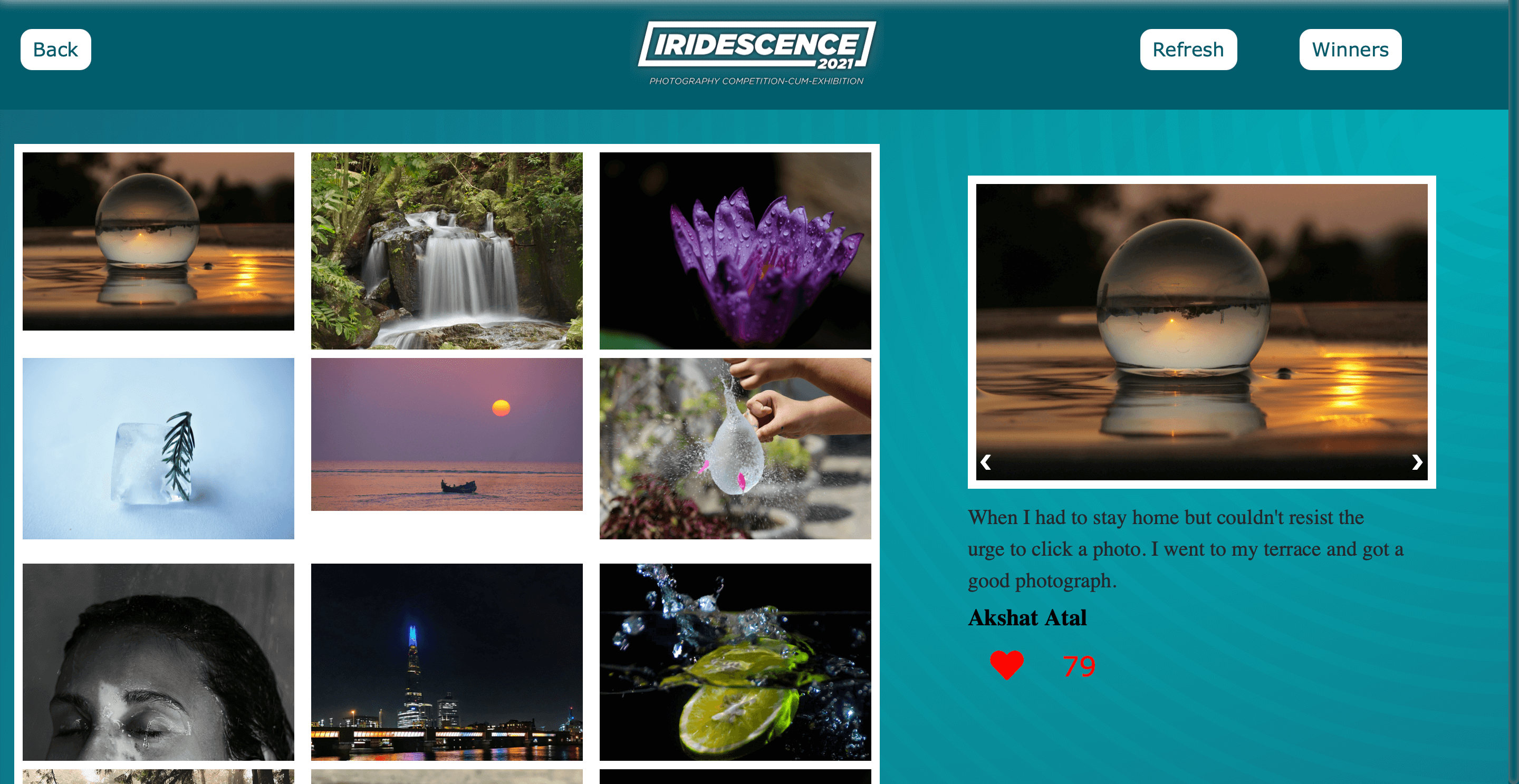 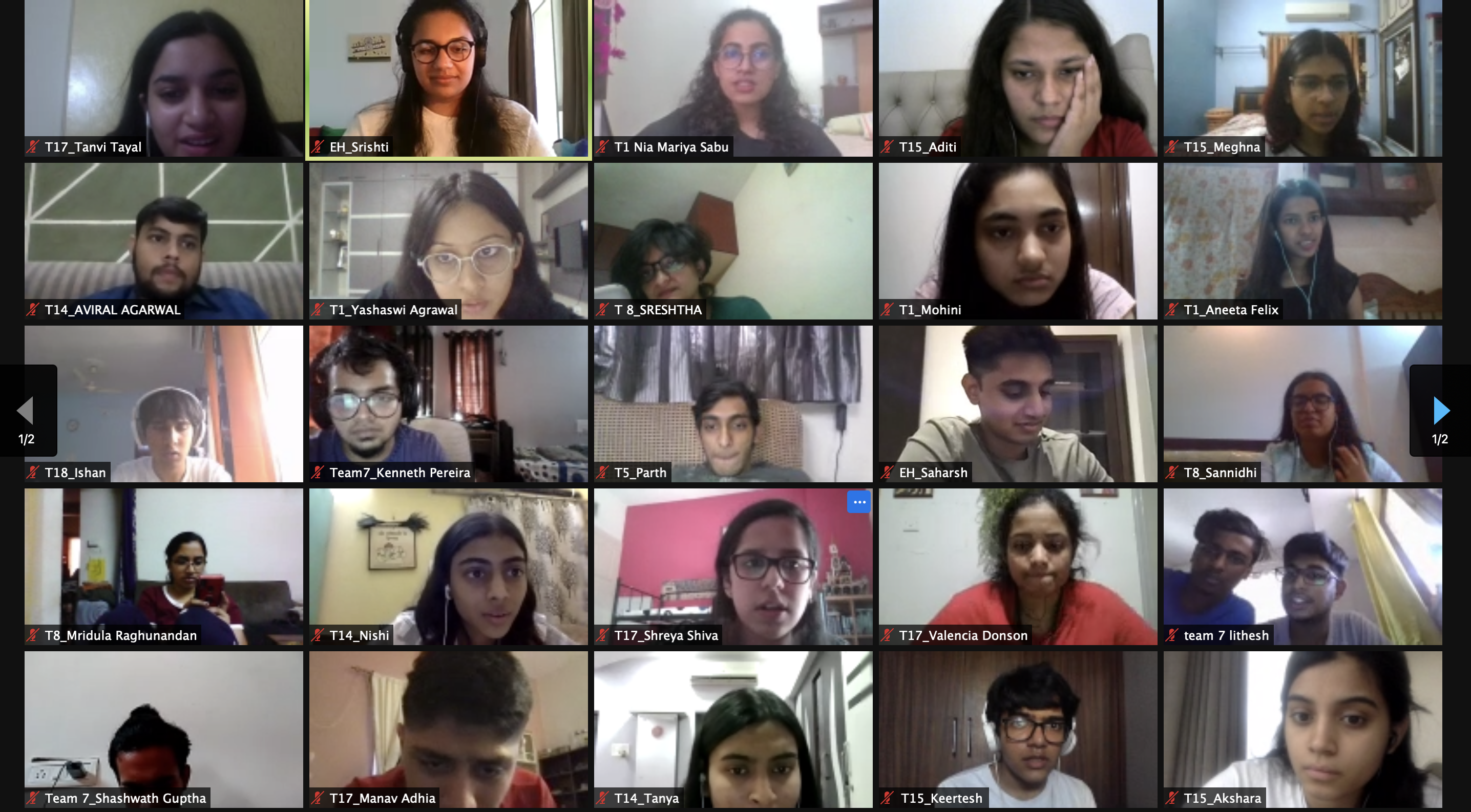 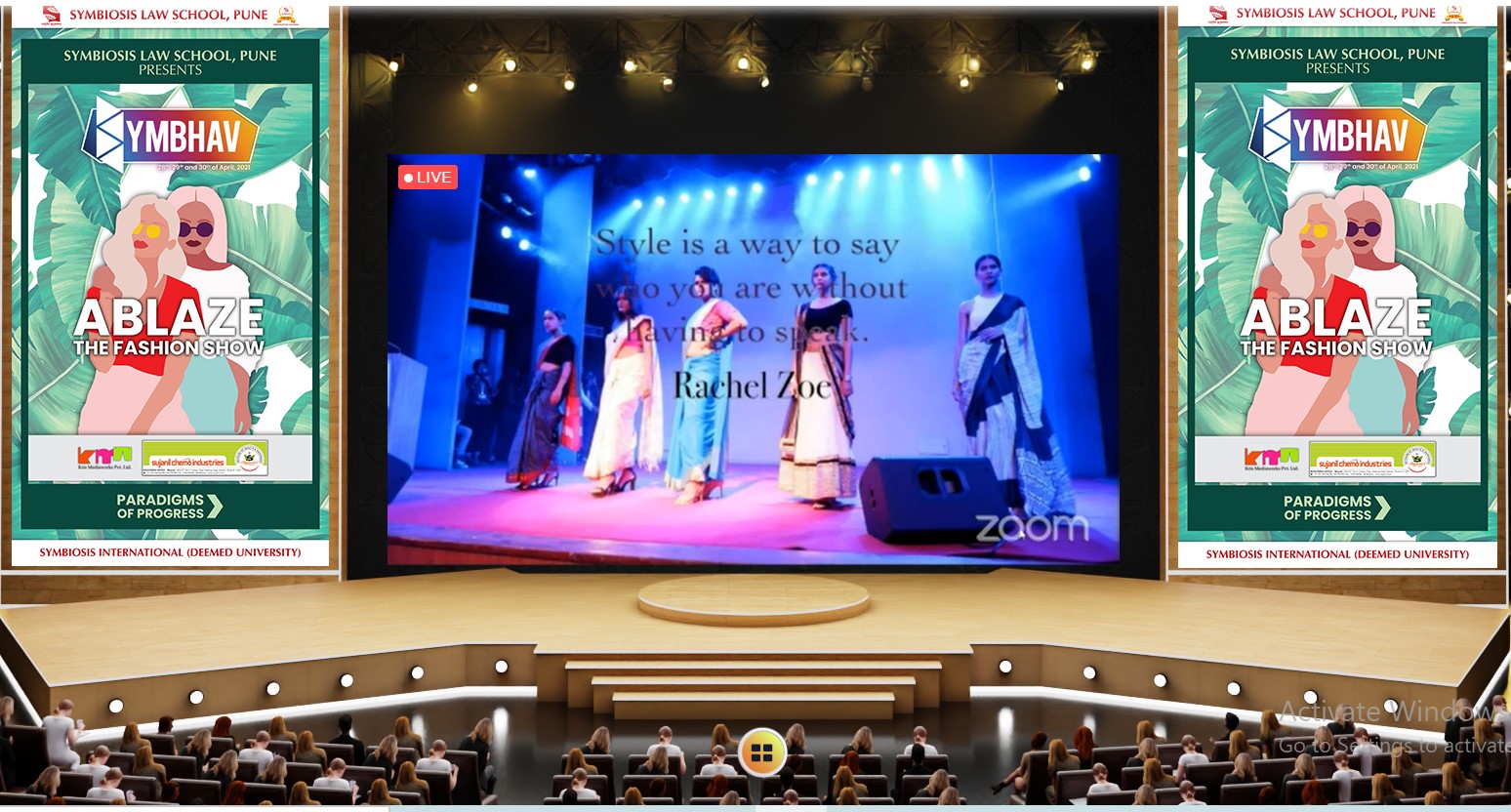 University) (SIU) organized the 13th Edition of Pune’s Annual Cultural Fest Symbhav 2021. The event was held on 25th and 28th to 30th April, 2021 on the immersive virtual events platform Samaaro. The event celebrated the rise of new beginnings and unwavering resilience of humankind through the theme ‘Paradigms of Progress’. Stressing on the power of precedence and learning from the instances of victory over the ordeals of the past year, Symbhav 2021 paid tribute to the progress that our world is making today through richer innovations in science and technology, growing awareness and discourse about environmental issues, and the success of social movements around the globe, which have given voice to the once oppressed and minority communities. Symbhav 2021 hosted over 40 events across the four days and witnessed participation by over 600 national and international participants.

Symbhav was inaugurated on 25th April, 2021 by Chief Guest Mr. Suresh Prabhu, Member of Parliament, Rajya Sabha and India’s Sherpa to the G7 and G20. The Opening Ceremony consisted of stimulating discussions about the theme- “Paradigms of Progress”, an undeniable truth in the current world with healthcare workers and world leaders leading the way through the COVID-19 pandemic. The fest commenced with the mesmerizing and energetic opening dance performed by the students of SLS-P. The title sponsors for Symbhav 2021 included Amrutha Constructions, a company that believes in building the future through construction of roads, irrigation, buildings and Rani Electrodes, a “one-stop” shop for Welding Electrodes, MIG Wires, Alloy and Non-Alloy Steel Wires, High Tensile Cold Forged Fasteners, Cold Forging Components, Automobile parts, Special Fasteners, Standard Fasteners.

The Global Student Conclave gave a platform to students from across the globe to discuss pertinent issues was conducted on the second day. Mr. David Blanco from University of Arizona, USA, Mr. Pranav Raghuvanshi from University of Dublin, Ireland, Mr. Lewis Hay from Edinburgh Napier University, Scotland, and Mr. Yogi Bartajaya from the University of Padjadjaran, Indonesia enriched the audience with a detailed discussion on ‘Right to Obscurity as a Human Right for Global Data Privacy’. They highlighted upon the legal issues of privacy in today’s age of technology, digital space, and facial recognition.

The first edition of Ibtida- The Film Festival was held at Symbhav on 28th and 30th April, 2021. Within this festival, Lamhe, a short film competition was organised which aimed at encouraging talent and student initiatives in filmmaking. The event was graced by Dr. Shashikala Gurpur, Director, Symbiosis Law School Pune and was judged by Prof. Nikhil Narkar, noted Short-Film Maker and Visiting Faculty, SLS-P. The three shortlisted entries- “Khichdi”, “Aberration” and “The Shield”, explored Socio-legal like gender discrimination and unlawful detention through beautiful stories and artful filmmaking. The competition was won by the student team from PES University for the film “The Shield”. Day 3 of Symbhav 2021 witnessed the Legal Film critique writing competition that sought to explore the intricacies of law through films in which Ramanpreet Singh. St. Mary’s School, New Delhi was declared the winner.

Pronite, which symbolises the pinnacle of anticipation and excitement in the days of Symbhav was the major attraction of Day 3. The Pronites witnessed Dishaan mesmerizing the audience with his soulful vocals and Rahul Dua putting smiles on faces, his observational comedy leaving the audience in stitches. The beaming faces and roars of laughter were proof that the exhilarating performances of the gifted artists helped in dispelling the gloom of these dreary days.

Last day of Symbhav was marked by the closing ceremony of the SLSP MUN. At the SLSP MUN closing ceremony, High Commendation was received by Director of GRU, MUN Squadron in the War Cabinet, Delegate of Russian Federation, Amity Noida for UN Security Council and by the Delegate of Mauritius- ILS Law College in the South Asian Association of Regional Cooperation, Best Member was awarded to Delegate Sitaram Yechury, St. Joseph’s College Bangalore in the All India Political Party Meet, Best Delegate was awarded to Austria, Ambedkar University in the UN General Assembly Social and Humanitarian Council and Delegate of Cambodia, Vivekananda Institute of Professional Studies for UN Environmental Programme and Best Correspondent was awarded to Delegate of Xinhua, MUN Squadron for International Press.

Day 4, Symbhav presented the tenth edition of the annual Law Theatre- “Dar-ba-dar” which depicted the migrant labour crisis. Directed by Mr. Sachin Malvi and performed by the students of SLS-P, “Darbadar” followed and highlighted the ordeals faced by migrant workers in the face of the COVID-19 pandemic and was inspired by the Suo motu writ petition of the Supreme Court on the same. The play was a huge success with its dramatic expression and socio-legal interpretation of the miseries faced by the migrant workers and stole the hearts of the audience with the sentimental storyline and the passionate performance by the actors.

The closing ceremony of Symbhav 2021 was conducted on 30th April in the conference room of Samaaro platform at 5 PM IST. The closing address was delivered by Dr. Shashikala Gurpur, Fulbright Scholar, Director, SLS-P. In her speech, she stressed on how “against all odds, the same energy has been maintained despite the country’s mood”. It was followed by the announcement of Symbhav Event winners by Prof. Kshitij Naikade, Deputy Director (Administrative), SLS-P, Prof. Bindu Ronald, Deputy Director (Academics), SLS-P and Prof. Santosh Aghav, SLS-P. The best delegation of Symbhav was announced and awarded to St. Joseph's College (Autonomous), Bangalore. The 'Subject Topper' and Scholarship Awards were also declared thenafter.

The winners of the Nithin Patil Memorial Mono-Advocacy Competition, an event named after Late Mr. Nithin Patil, a decorated alumnus of Symbiosis Law School, Pune were announced with Kaartikay Agarwal, National Law University- Delhi in first place, Hrishikesh Prakash, NLIU in second place and Chaitanya M Hegde, GNLU as the Best Advocate. The event was graced by brother of Late Mr. Nithin Patil, sharing the memories of Mr. Patil when he was a student of SLS-P.

The concluding vote of thanks was delivered by Shervil Adappa, Convenor, Symbhav- 2021.