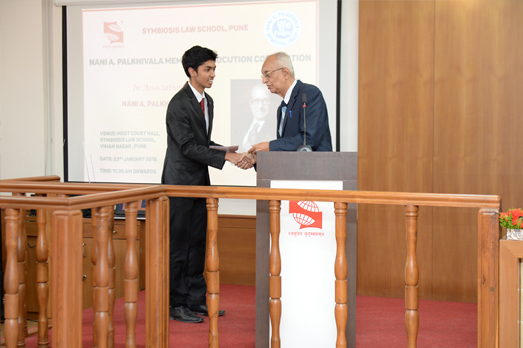 Symbiosis Law School, Pune, the constituent of Symbiosis International University, Pune, in its quest for gaining legal excellence, organised the 8th Nani A Palkhivala Memorial Inter CollegiateElocution Competition -2016 for law students on behalf of Nani A Palkhivala Memorial Trust, Mumbai on 23rd of January, 2016 in its Moot Court Hall from 11:30am to 1pm.
The event commenced with the lighting of auspicious lamp by the dignitaries on the dais including Dr. Shashikala Gurpur, Director, Symbiosis Law School, Pune, Dean, Faculty of Law, SIU, Dr. Bindu Ronald, Deputy Director, SLS, Pune, and the Judges for the competition Shri. S.V. Naik, Former District Judge (Retd.), Mr. Amitabh Dasgupta, Adjunct Faculty, Symbiosis Centre for Media and Communication & Dr. Shweta Deshpande, Faculty, Symbiosis School of Liberal Arts, Pune.
Dr. Shashikala Gurpur in her welcome address said that SLS, Pune has been success fully hosting this elocution competition in collaboration with Nani A Palkhivala Memorial Trust, Mumbai for last 7 years. She stated that elocution is a skill that serves as the training ground for legal education. Encouraging the participants, she said that the art of elocution provides an all-round perspective on a subject and is an essential part of a lawyer’s career. Dr. Gurpur also reflected on the life and laurels of late Mr. Nani A Palkhivala. She apprised the audience of the scholarships constituted by Symbiosis law School, Pune in the name of late Mr. Nani A Palkhiwala for the toppers in the subjects of Constitutional law and Taxation Law respectively.
The contestents were supposed to speak on one of the following topics namely, “Law as an Instrument of Change and Progress”, “Mobile Applications and Data Access- Serious Threat to Privacy” and “News Media- Blurring Line Between Responsibility and Overreach”.
After the invigorating speeches by the participants, the judges were invited to address the house and share their observations made during the course of the competition. Mr. Amitabh Dasgupta appreciated the performance of the students. Tracing the origin & evolution of media, he said, that people nowadays depend very much on media for understanding & analysis of global affairs. Therefore, the role of the media is not just to inform but to educate the masses. It was also stated that media enterprises are commercial in nature and the issue is not that paid news exits but that the media does not tell the masses that it is paid. Mr. Dasgupta also responded to several questions raised by the audience and reassured their faith in news media.
Dr. Shweta Deshpande, faculty, Symbiosis School of Liberal Arts, Pune congratulated the students on being able to question news media and having opinions about the affairs of the world.
Shri. S.V. Naik, Former District Judge (Retd.) was then invited to declare the results. V.G. Sreeram from Symbiosis Law School, Pune was adjudged the best speaker. Abhishek Salian from DES Law College, Pune and Kunal R. Sarpal, from ILS, Pune secured the second & third prize respectively.
Shri S.V. Naik stated that good oratory skills are an essential weapon that one must be equipped with. Quoting an interesting incident from Ramayana, Shri S.V. Naik asked students to reflect upon their thoughts before speaking. He also spoke about human psychology and asserted that psychology plays a vital role in speaking.
The event concluded with Dr. Bindu Ronald, Deputy Director, Symbiosis Law School, Pune delivering the Vote of Thanks.