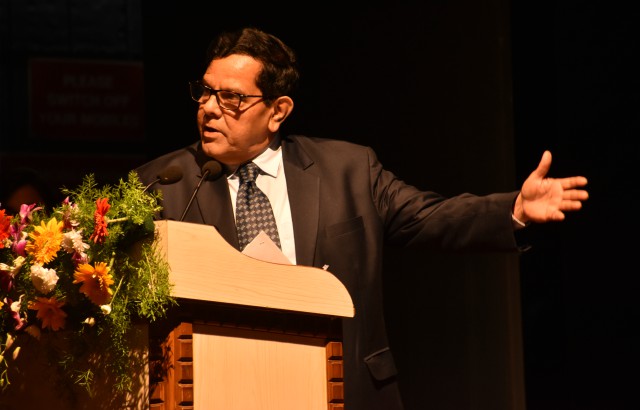 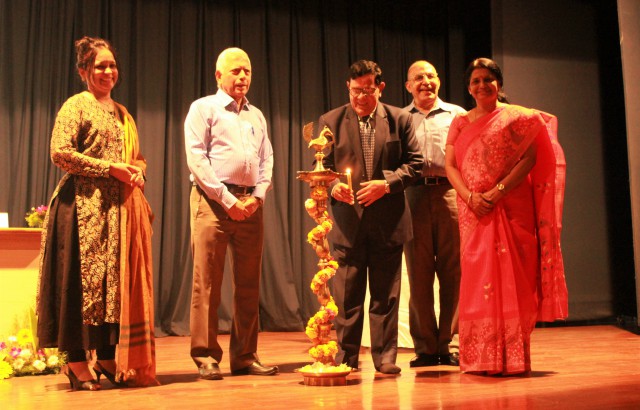 The program began with lighting of lamp by the dignitaries followed by garlanding of Shri B.G. Deshmukh’s portrait. Dr. Shashikala Gurpur, Fulbright Scholar, Director, Symbiosis Law School, Pune, Dean, Faculty of Law, SIU, spoke highly of the recent developments in the Indian legal sphere namely landmark judgment on the Right to Privacy and other important judicial interventions relating to exploitation of women in the name of religion. Dr. Gurpur observed that the perspective regarding citizen- government relationship has changed from that of master-servant to that of public servant and citizen and this change has been effected by popular movements such as consumer rights and Right to Information (RTI) campaigns. “The machinery of law has to be lubricated with the ideals of humanity in order to bring about good governance”, she concluded.

Mr. Satish Khot, Member, PCGT elucidated the achievements of Shri B.G. Deshmukh. He encouraged the students to be as committed to the nation as Mr. Deshmukh, whose apolitical stance, sincerity and meticulous dedication to his work made him a visionary. Mr. S.C. Nagpal, IRS (Retd), Chairman, PCGT, Pune Chapter delivered the presidential address and also introduced the theme of the memorial lecture. He said, “whenever there is injustice, it is the duty and responsibility of citizens to raise their voice in order to protect their dignity and rights, as dignity is non-negotiable”.

The keynote speaker in his address provided insight into the Citizens’ Charter, a predecessor to the Maharashtra Right to Public Services Act, 2015. He stated that the main drawback of the Citizens’ Charter was its weak implementation, especially at the grass-root level. He reminded the audience that delivery of public service is a statutory obligation and not a State generosity. The Speaker opined that the eligible citizens of Maharashtra must have access to transparent, accountable, efficient and timely public services.

The Act includes within its ambit government departments at all levels thereby empowering all sections of the society. The Speaker also enlisted the salient features of the Act. The Act defines the word ‘eligible persons’ and ‘public authorities’ for the easy understanding of the citizens. It also stresses on the utilization of IT services to avail public services. This Act gives an online access to basic government services through its portal ‘Aaple Sarkar’ ( https://aaplesarkar.mahaonline.gov.in/en ) and a mobile app available in both Marathi and English. However, offline complaints are also not discouraged, thereby bridging the gap between urban and rural. The Maharashtra State Commission was established under the Act, which has been empowered to take suo moto cognizance for non-performance of services. He concluded his speech by enumerating the challenges faced in the implementation of the Act, such as intricate procedures, lack of awareness, access to IT services amongst Indians and sensitization of the bureaucracy.