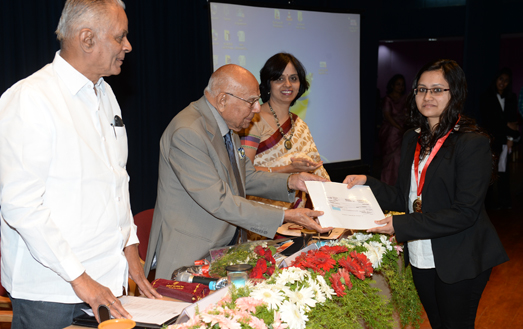 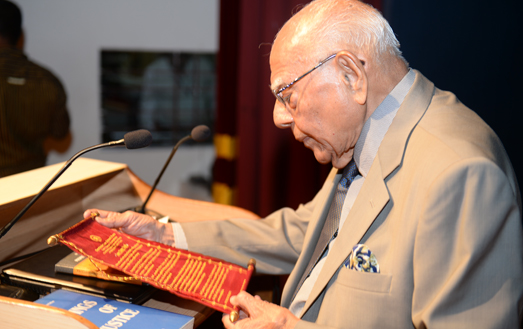 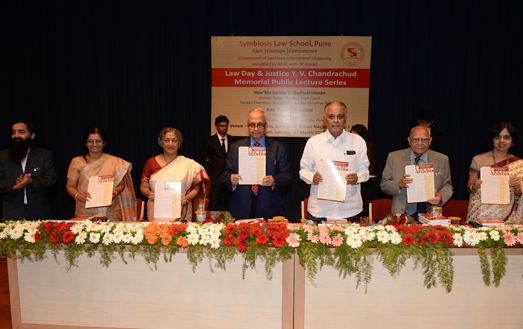 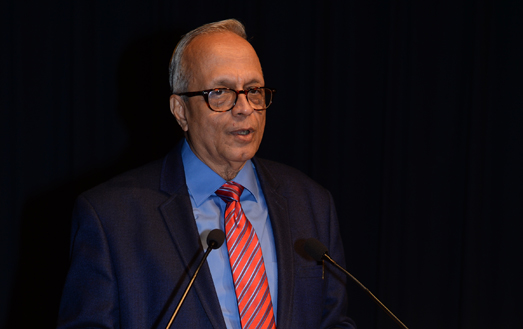 
The event began with the traditional lighting of lamp by the chief guest Hon’ble Justice S. Radhakrishnan, Former Judge, Bombay High Court, former Chairman, Maharashtra Administrative Tribunal, along with other dignitaries present on the dais. Dr. S. B. Mujumdar, Chancellor, Symbiosis International University, in his opening remarks spoke about the importance of Law Day and significance of celebrating it. Remembering Late Adv Ranade, he mentioned that the Law Day oath given to the students on this auspicious occasion was crafted by Late Adv Ranade along with Adv. Ram Jethmalani, who were instrumental in bringing it to SLS, Pune, after taking inspiration from the Law Day celebrations held in the United States of America by President Eisenhower.He recalled the history of “Justice Y. V. Chandrachud Memorial Public Lecture Series” and thanked everyone for making this day memorable.

Dr. Shashikala Gurpur, Director, SLS, Pune and Dean, Faculty of Law, SIU, in her address, highlighted the milestones of law school in the last one year. She spoke about the national and the international achievements of the college and its contribution towards the community and various other stakeholders in the year 2014-15. Talking about the significance of Law day, she said that it offers us an opportunity to celebrate the spirit of democracy and it reaffirms the faith in it. She threw light on coinciding of this day with International Women’s Day, reinstating the belief of this college in promoting Gender Equality. 2014 being a milestone year for this college as Symbiosis Law School, Pune, shifted to a state of the art campus at Viman Nagar, Dr. Gurpur, elaborated on the start of new three year LLB course and specialisations added to the one year LLM course along with various other initiatives in international collaboration taken up, which have brought laurels to this reputed institution working towards cthe pinnacle through care, courage, competence and collaboration.

This was followed by Dr. S. B. Mujumdar, felicitating all the dignitaries.Adv. Ram Jethmalani, Sr. Advocate Supreme Court of India, Professor Emeritus, SIU, Member of Parliament (Rajya Sabha), then presented the “Ram Jethmalani Trophy” on Evidence Law to Ms. Soumya (Vth Year), BA LLB, for scoring highest marks in Law of Evidence’ which carried a medal and a cash prize of Rs. 50,000.

Adv. Ram Jethmalani then delivered his address where he left the audience spellbound with his excellent oratory. He emphasized on the need of the hour being the awakening and rise of women in the society and reiterated his desire of science prevailing over misguided religion. Religion today is against public good and secularism has become fraud. He called upon the students as lawyers of tomorrow to always be guided in their actions, not merely in their legal career but in life as well, by reason and logic, and to work towards building a society where science prevails over religion. He also exonerated that religion should compete in free market. Concluding, he said that secularism of India mandates a life which is wholly governed by logic and nothing else. Following his thought-provoking concluding remarks, he administered the Law Day Oath to the assembled audience.

The audience then saw release of the booklet of Justice Y.V. Chandrachud Memorial Public Lecture 2014 ­­­­­­­­­­­­­and Lex-Et booklet, SLS annual newsletter by the Chief Guest , Hon’ble Justice S. Radhakrishnan. Further the two masterpieces were released: the book, “The integral dimension of Law” authored by Dr. Prof. K. Paramaswaran along with Symbiosis Law School’s 2nd volume of Journals SSLR and SCLR; all published by Lexis Nexis.

Hon’ble Justice S. Radhakrishnan, delivered the Justice Y.V. Chandrachud Memorial Public Lecture 2015 on the topic, “Incorporation of Human Rights in India: Judge’s Dilemmas and Challenges”. He started by talking about how the Indian Supreme Court has played a pivotal role in the evolution of Human Rights and showcased the implementation of it over the years by plethora of Supreme Court cases. Hon’ble Justice however lamented the sad divide between the rich and the poor which has existed from historic times and which still prevails and continues to remain an eternal struggle.

Tracing the history of human rights, from the inception of the Universal Declaration of Human Rights in 1948 to the present scenario, he said if human rights are not implemented, it will inevitably lead to a revolution in the nation.

He further threw light on Human Rights violation through various landmark cases such as the Nilabati Behera v. State of Orissa, Sunil Batra v. Delhi Administration, Sheela Barse v. Secretary, Children’s Aid Society. He also spoke about Justice Bhagwati’s role in the case of Francis Coralie where right to life was redefined to mean living with basic human dignity. The landmark case of Paramanand Katara v. Union of India and Others, was also elaborated on by him where the Supreme Court emphasised how every injured citizen should be brought for treatment in case of accidents and instantaneously be given medical aid to preserve life. This case needs to be highlighted and disseminated as once life is lost it cannot be restored.

He then spoke about other human rights violations diseasing the society such as bonded labour, torture, violence against women, employment of manual scavengers, political refugees and human rights violations of children. He highlighted how progress has never come into these strata of society. Rights are gravely violated in our nation today. Be it normal human beings or prisoners, all are entitled to life with basic human dignity. He further elaborated on the fact that children are not born with discrimination in their minds. It is learnt by example, seen in the day to day family life as well as in the surrounding environment. Today being International Women’s Day, he spoke about the burning issues of women’s rights or lack of them in our country. He spoke of the recent release of the BBC documentary “Daughter of India”, on the Nirbhaya case, which showcases the appalling truth about the current situation of discrimination against women. It shows that India has a long way to go and it is primarily every mother’s responsibility to inculcate the concept of equality and distributing household and other responsibilities between the son and daughter to change the existing mindset. Concluding his lecture, he said that emancipation of women can only be achieved through education, employment and socio- economic empowerment.