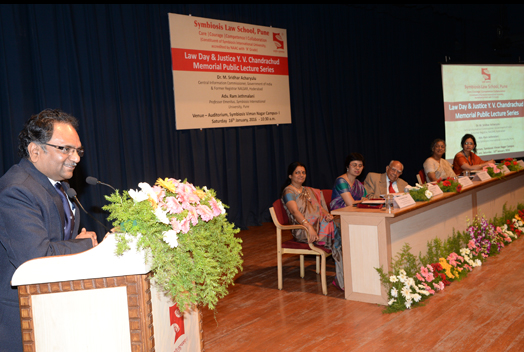 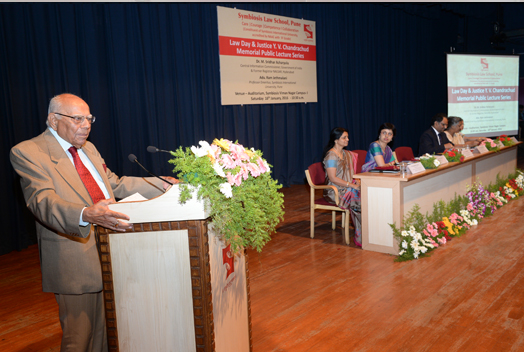 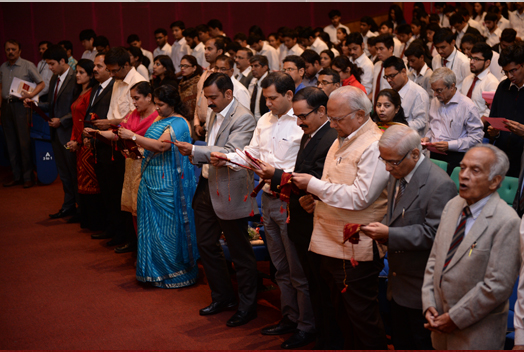 The event commenced with the traditional lighting of lamp by the chief guest Dr. M. Sridhar Acharyulu, Central Information Commissioner, Government of India & Former Registrar, NALSAR, Hyderabad, along with other dignitaries present on the dais.

In her welcome address, Dr. Shashikala Gurpur, Director, SLS, Pune and Dean, Faculty of Law, SIU, spoke about the significance of Law Day and its importance in contemporary times. While quoting Arundhati Roy, Richard Posner and Noam Chomsky, she defined public intellectualism as a dying breed but one that is of high relevance in today’s times. She apprised the audience that Symbiosis Law School, Pune, began celebrating Law Day since 1984, which is originally celebrated on the 26th of November, to recapture and instil the values and messages that were always associated with this day. She spoke about both, the quantitative and qualitative achievements of the college and the vision & mission of the same to renew its goals from year to year. Dr. Gurpur highlighted the niche that Symbiosis Law School, Pune had created in legal education, which allows it to be described as a ‘classic’ law school. She threw light on the efforts of the college in striving towards their goal of international collaboration. These efforts comprised of student exchange programs, faculty exchanges and several other opportunities for international exposure. She gladly declared the exemplary research and consultation statistics that the law school regularly exhibits. Elaborating upon the legal-aid achievements and efforts of the college, Dr. Gurpur highlighted major events like the Maha Lok Adalat which 128 students visited along with the law school’s efforts to revive the Mediation Centre in the District Court and the college’s collaboration with NGO’s for addressing the legal needs of children and commercial sex workers.

Dr. Vidya Yeravdekar, welcomed the dignitaries on the dais. She expressed her elation regarding the selection of the topic for the day being, “Right to Information: an intrinsic part of Freedom of Speech and Expression” and described this right as a tool to hold people accountable. She reiterated the transformation of Symbiosis International University into a world class institution, which she defined as a university that produced aware, global citizens. She handed the baton to the students, giving them the responsibility of contributing to the mission of international collaboration, through active participation in different spheres of academic & professional life.

Dr. Rajini Gupte, Vice Chancellor, SIU, in her address highlighted the importance of the faculty of law within the umbrella of the university as a whole, on account of the multidisciplinary and interdisciplinary nature of law. She commended the efforts of Dr. Shashikala Gurpur in encouraging the formulation of courses in a similar way. ‘The success of students is the success of Symbiosis and these students – the alumni of tomorrow, will have a major role to play in making our university a world class university,’ she said. She consequently concluded her speech by giving her best wishes to the students in all their future endeavours.

The audience then saw release of the booklet of Justice Y.V. Chandrachud Memorial Public Lecture 2015 by the Chief Guest, Dr. M. Sridhar Acharyulu and the other dignitaries on the dais.

Adv. Ram Jethmalani administered the law day oath. He expressed his pride at the creation of democracy in India and defined it as the rule of the citizens themselves. He highlighted that the Right to Information Act was conceived not by the government but by the judges in courtrooms. He expressed his views on the same by describing the Right to Information as being an implicit freedom bestowed to every citizen in an Indian democracy. He condemned any restriction placed on citizens gathering information about the working of the government that they had elected. He reiterated that a democracy could not possibly function without the right to know, as education about affairs of public interest was the fulcrum of a democracy. He went on to describe the conception, evolution and spread of Law Day, right from its American roots and described the celebration of Law Day as a constitutional duty to express the ideals of the constitution to the people of the nation. He expressed his pride in the secular nature of the Indian constitution, describing it as the ‘greatest gift’ of the constitution. His remarks were a fitting conclusion to this momentous occasion.

The ceremony closed with the national anthem.