Panel Discussion on “Cyber Security: How to Escape Being Duped by Cyber Crime” in the Multipurpose Hall, SLS-Pune 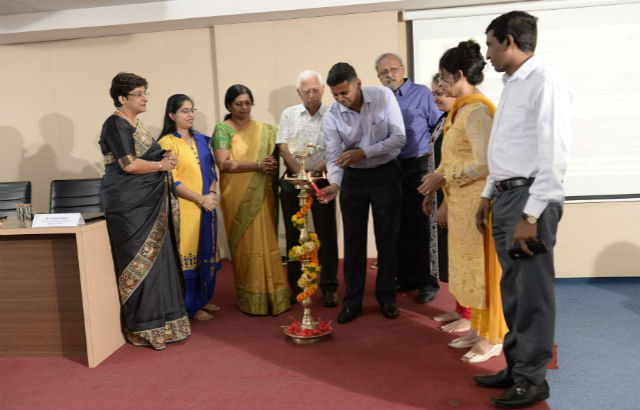 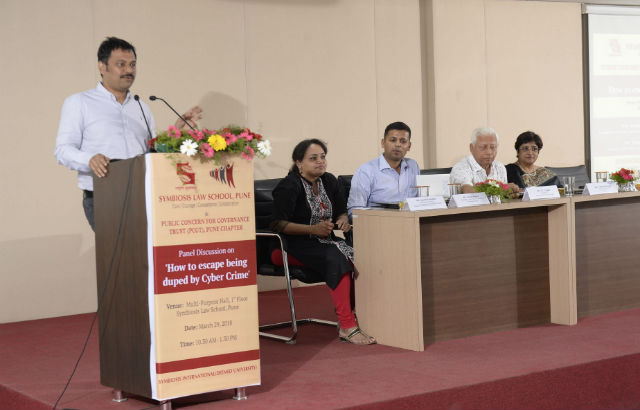 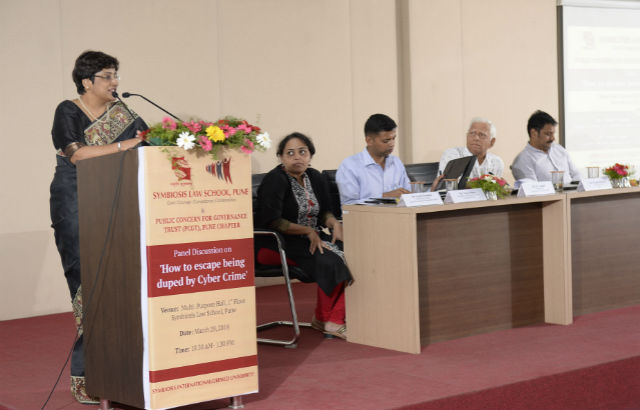 The program began with the lighting of the ceremonial lamp by the dignitaries.

Dr. Shashikala Gurpur, Fulbright Scholar, Director, Symbiosis Law School, Pune, Dean, Faculty of Law, SIU, in her welcome address, owed the uniqueness of the program to the partnership with PCGT which has always rendered manifold services. She encouraged the students to be open to multiple ideas and rejected the impression that knowledge is created only in universities. The Cyber World, according to Dr. Gurpur, has increased vulnerability and created unrest in the youth. Abuse of cyber capability has especially victimized women and children and the rash IT behaviour is subsuming in the lives of students and is like a ‘subtle enemy’. She emphasized the need of privacy protection and cautioned the students about the vulnerability resulting from the indiscreet use of cyber space. Dr. Gurpur encouraged the students to strive to achieve the mission of responsible citizenship by taking this program as a prelude.

Mr. Satish Khot, Member, PCGT, Pune Chapter introduced PCGT and the eminent speakers to the audience. Pune Chapter was launched in August 2016. It aims at creating awareness about rights and duties of citizens, mobilizing public opinion, addressing public grievances and sensitizing the public by conducting various seminars and public meetings.

Ms. Sonali Patankar, President & Founder, Ahaan Foundation & Responsible Netism from the panel spoke on ‘Cyber Psychology, Psychological Impacts of Excess of Access & Digital Distress among Youth’. Ms. Patankar interpreted cyber safety as more of a parental approach. The youth is overpowered with technology and thus, humanizing technology is important. Ms. Patankar called the older generation the ‘internet alarmists’ and the youth the ‘internet enthusiasts’. She called upon the need to cope with ‘Digital Diarrhoea’. Cyber Security and Cyber Safety are the two major aspects which need to be brought together so as to ensure public security and online safety. She listed sleep deprivation, depression, exposure to pornography, gaming addictions and malfunctioning relationships as major concerns. She concluded by laying down certain cyber safety guidelines for the students to adhere to and encouraged them to promote peace, empathy and hope.

Mr. Brijesh Singh, IPS IGP Maharashtra, Head, Cyber Project for Govt of Maharashtra, Mumbai was the second panellist who addressed the topic, ‘Role of Law Enforcement: Youth as Trend Setter in Cyber Security.’ Mr. Singh focused on the commission of cyber-crimes and the emerging concept of ‘crime as a service’. Online mobilisation and radicalisation are designed to find vulnerable individuals. He also mentioned ‘Shodan’, a search engine which can hack people’s cameras, turbines and other vulnerable devices. Serious operations have been exposed owing to the vulnerability of cyber technology. Sir concluded by highlighting the manipulative forces which affect the opinions of the impressionable youth and advised them to maintain cyber safety.

Thereafter, Mr. Vineet Kumar, President, Cyber Peace Foundation, Ranchi and Delhi dealt with ‘Cyber Security and Global Trends in Cyber Warfare’. According to him, ‘everything that is connected is hackable.’ According to the statistical findings of Mr. Kumar, in 2018, 500 million Indians are connected to the internet and the number will shoot up to 1 billion by 2020. ‘Sophia’, the artificial intelligence robot was also listed as a technological wonder. Mr. Kumar discussed the recent cyber-attacks including the Air India hack and the Bangladesh Bank hack. Near-Field Communication (NFC) attacks which steal money from credit cards through phone hacks were discussed followed by the vulnerability of Air Traffic Control systems to cyber-attacks. He concluded by emphasising the urgent need to be safe and secure from cyber-crimes.

Adv. Vaishali Bhagwat, an Expert on IT Act from Pune and the final speaker for the discussion talked about ‘Cyber Law and Implementation.’ She mentioned that some countries recognized cyber offences as tier one threat and established necessary warfare, whereas India has taken its time to initiate responses. Ms. Bhagwat broadly highlighted the legal developments in relation to cyber-crimes. Amendments in the Indian Evidence Act, 1872 to add digital evidence as an admissible form of evidence were discussed in brief. She discussed the legislations that came up in 2013 and dealt with sexual harassment in cyber space. She also shed some light on the National Cyber Security Policy and called it the duty of the sentinels of justice to address these escalating cyber security issues.

The vote of thanks was proposed by Dr. Bindu Ronald, Deputy Director, SLS, Pune.