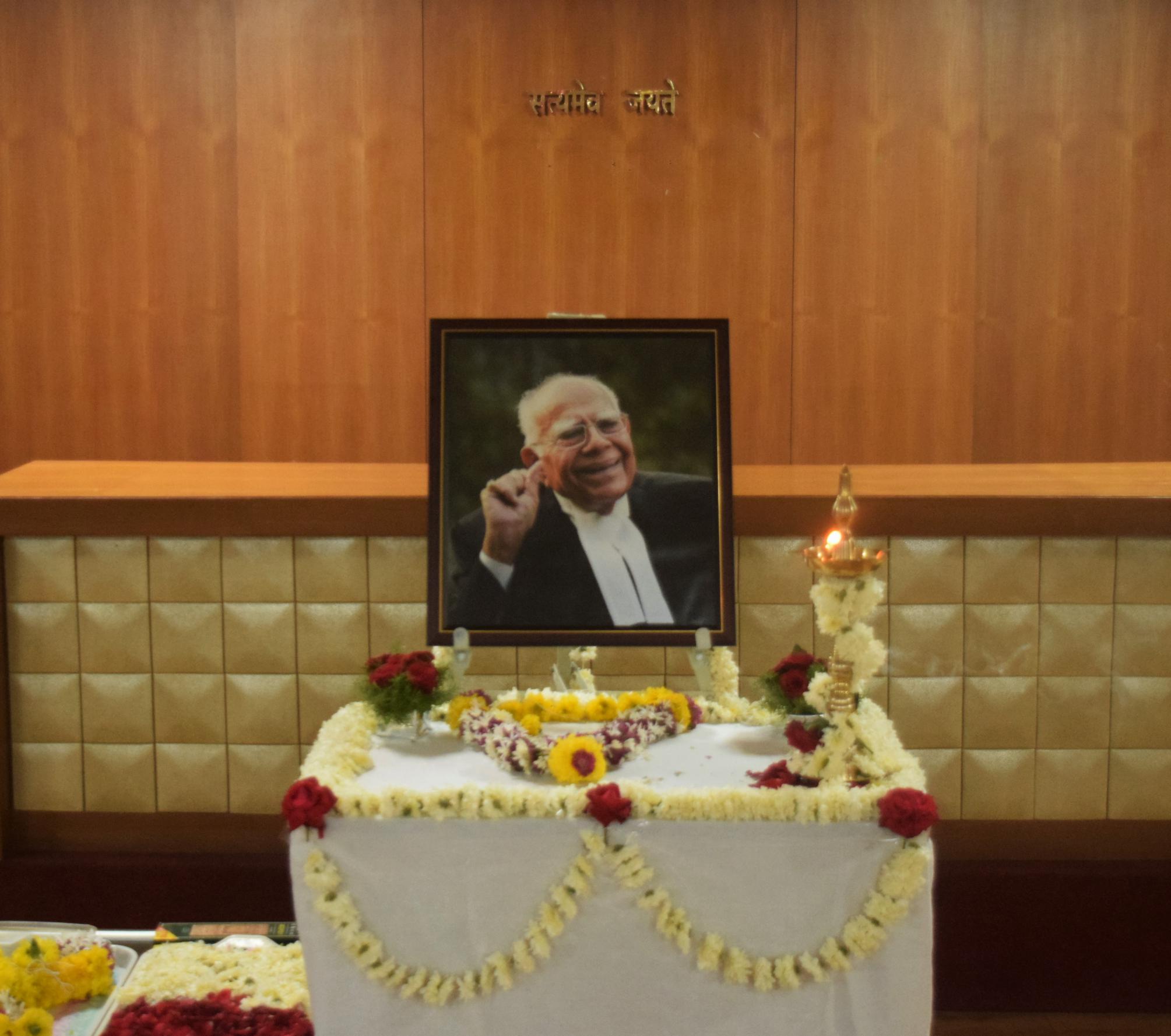 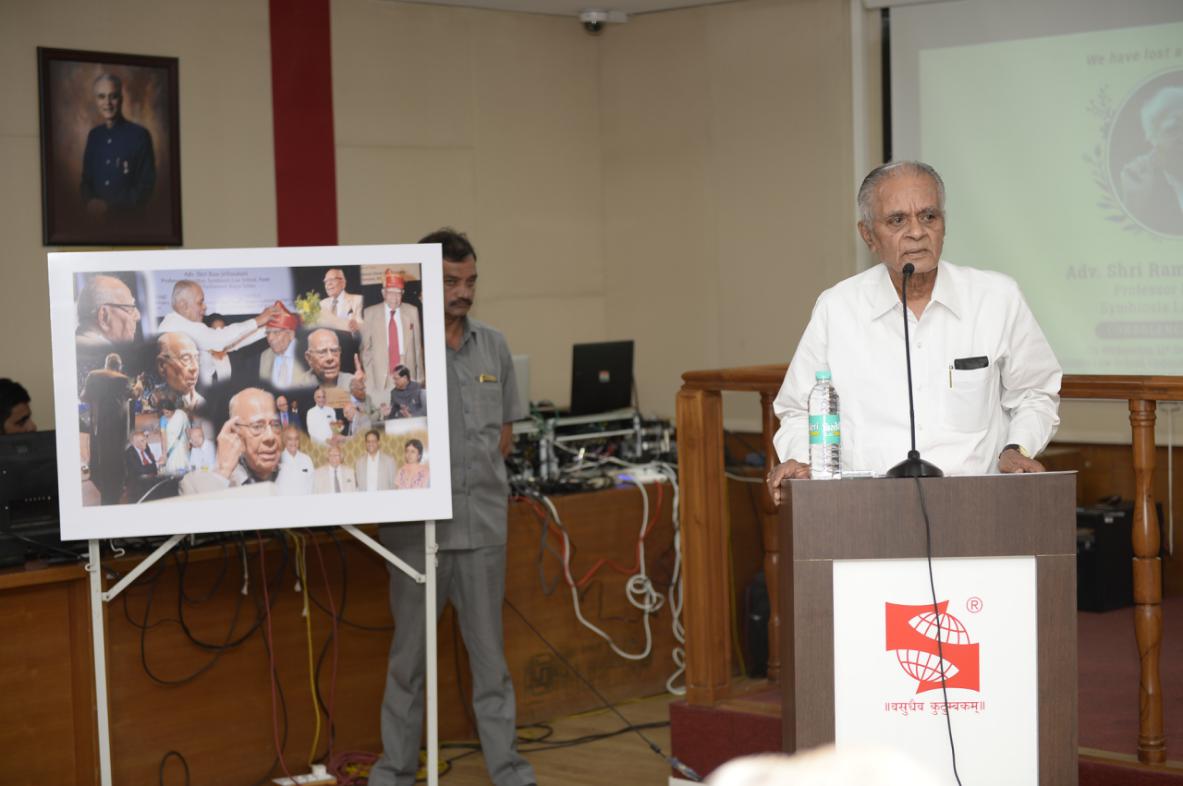 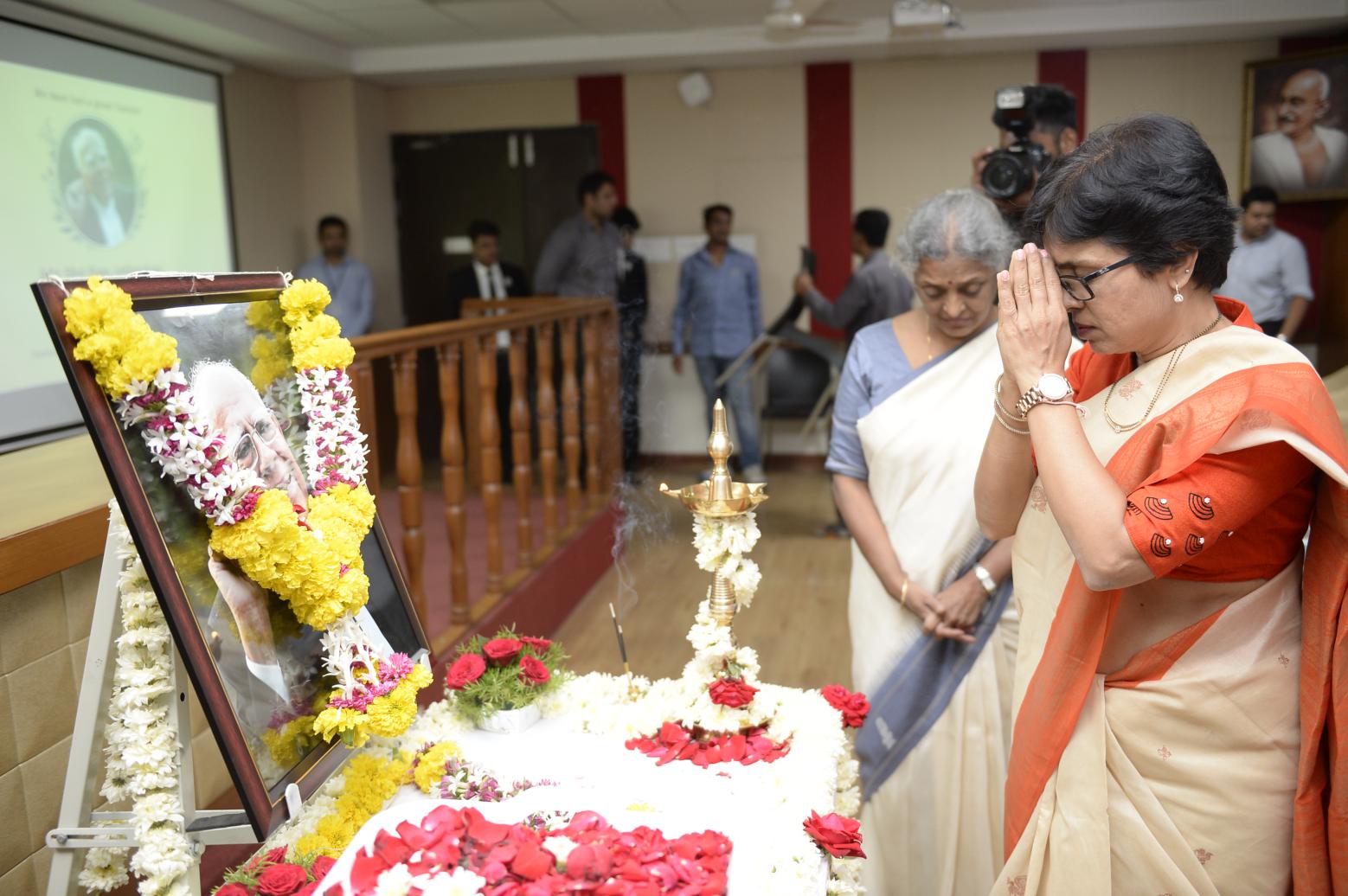 Dr. Shashikala Gurpur, Director, SLS-P, Dean, Faculty of Law, SIU fondly remembered  Late Advocate Shri Ram Jethmalani in her welcome address. She recalled the vibrancy of Mr. Jethmalani's personality exuding wit and humor. She spoke glowing about his dedication and commitment to law. Dr. Gurpur remarked how he could invoke a sense of patriotism in the hearts of all who had the privilege of listening to him.

One of her fondest memories is associated with the publishing of his book 'Rebel.' The book was a collaborative effort of the faculty members and students of Symbiosis Law School, Pune. It depicted his dynamic personality and his various roles as a lawyer, a teacher and a mentor. As the chairman of BCI, he proposed the groundbreaking idea of commencing a five-year law programme to revamp the Indian legal education system.

After  the address of Dr. Shashikala Gurpur, Late Adv. Jethmalani's picture was garlanded and a melodious Bengali song by Rabindranath Tagore was played. Further, the audience was shown a short film on the life, achievements and contributions of Late Advocate Shri Ram Jethmalani.

The next speaker, Mrs. Nalini Gera, an author, lamented the loss of a crusader in the legal field. Late Advocate Ram Jethmalani was a staunch believer of the fact that corruption can and should never be tolerated by the society. Beyond the legal arena, Mr. Jethmalani was a religious scholar, learned enough to write a treatise on Islam and have a debate on Hinduism. Reflecting on her days and long hours of discussions with him, she reminisced his humility.

Following the prayer, Advocate S.K. Jain described Late Advocate Ram Jethmalani as the 'Professor of Professors'. He stated how Late Advocate Jethmalani not only had a towering presence in the court but also had a positive impact on the lives of young students worldwide. He concluded his speech by stating how Late Adv. Jethmalani's  demise was not only a great loss to the legal fraternity but also to the entire nation.

Mr. Bari Malhotra, an industrialist, spoke about celebratory life of Late Advocate Ram Jethmalani, as one of the icons of the legal fraternity and cherished the relationship that with the Symbiosis family.

Dr. Shashikala Gurpur, in her concluding address highlighted the support and love extended by Late Advocate Ram Jethmalani to the community as a lawyer. Addressing the deep void felt by the teachers and students alike, Dr. Gurpur ended her address by expressing her gratitude to the support extended by Late Adv. Jethmalani in making Symbiosis Law School, Pune one of the most prestigious institutions in the legal education.