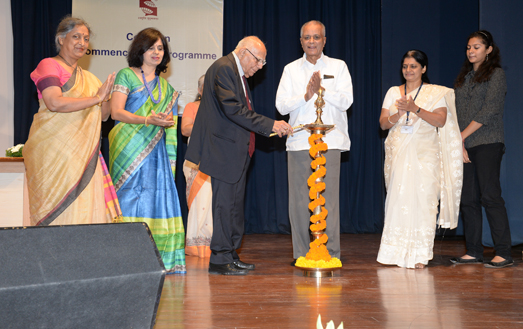 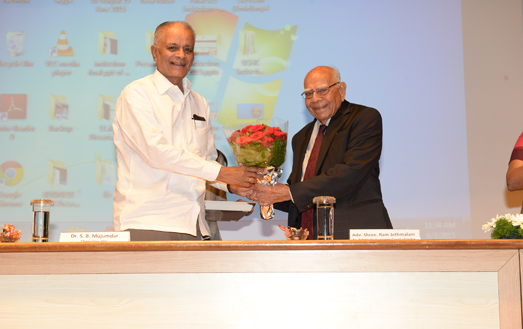 "The world today needs architects and not Missiles. Compassionate lawyers are the architect of a progressive society," said Chief Guest Advocate Ram Jethmalani, former Member of Parliament and senior advocate Supreme Court of India, on 3rd of August 2015, at the Common Commencement Programme 2015 jointly organized by Symbiosis Law School (SLS), Pune and Symbiosis School for Liberal Art (SSLA), SIU, in the SVC-I Auditorium.

The programme redefined the essence and reaffirmed the warmth of the concept of "The world as one family." It began with the auspicious lighting of the lamp by the dignitaries, followed by the opening remarks by Dr. Shashikala Gurpur, Director, SLS, Pune, Fulbright Scholar and Dean, Faculty of Law, SIU. In her address, Dr. Gurpur highlighted how students at Symbiosis will experience a sense of fulfillment owing to the exclusivity of life nurtured by the university. She said, "Whereas law is a normative process, liberalizing life is formative process, and the dynamics of the two will result in a holistic development."

Dr. Rajani Gupte, Vice Chancellor, Symbiosis International University in her welcome Address spoke about the ardent commitment of the faculty and the strong and illustrious alumni base of the university. She stated as to how interaction with these eminent personalities would create a massive influence in their choices in future.

Dr. Vidya Yeravdekar, Principal Director, Symbiosis addressed the audience emphasizing on the wide ranging disciplines being taught to a multitude of students by the Symbiosis fraternity and the value they hold in the development of each student's distinct personality. She said, "Pune, the Oxford of east, is known to be a vibrant city that hosts students from around 85 different countries and Symbiosis is home to majority of such students."

Dr. S. B. Mujumdar, Chancellor, Symbiosis International University welcomed the new batch on behalf of the Symbiosis family, extending love and best wishes for their future. He further emphasized on the importance of both Law and Liberal Arts in the world and how closely related are the works carried on by people who pursue these fields of education. He paid homage to our beloved former President, Dr. A.P.J Abdul Kalam by concluding with a quote by the Missile man of India stating, "One cannot change his destiny as it is already predetermined. However, one can change his habits. By changing our habits we can shape our futures."

The Chief Guest for the event, Adv. Ram Jethmalani, thereafter took to the stage, inspiring the audience and reflecting on their youthful enthusiasm, he exclaimed that the world of today belongs to the youth.

Exploring the dimensions of our democracy Adv Jethmalani added, "Where the democracy lacks education, it is a mockery of hypocrisy without limitation." He further stressed on the gravity of religious differences and the threat they pose to a secular country and extolled the Constitution as the only guardian of secular interests. The pertinent peril of the ISIS did not escape his watchful observations, and he criticized the movement as a misinterpretation of the principles of Islam. His words, "wisdom and vivacity," thoughtfully echoed long after the speech.

Event of the day concluded with the vote of thanks by Prof. Anita Patnakar, Director, SSLA.