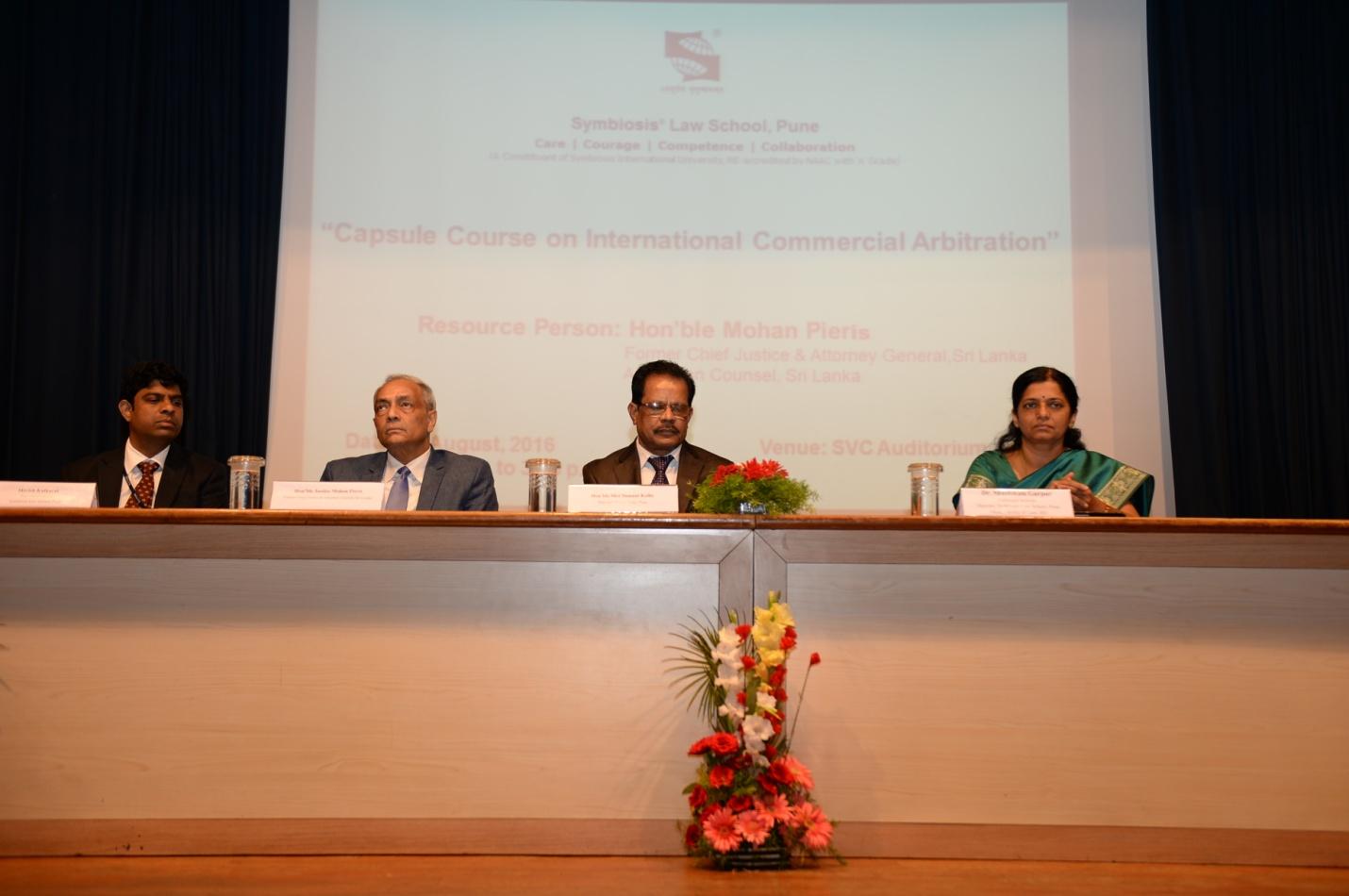 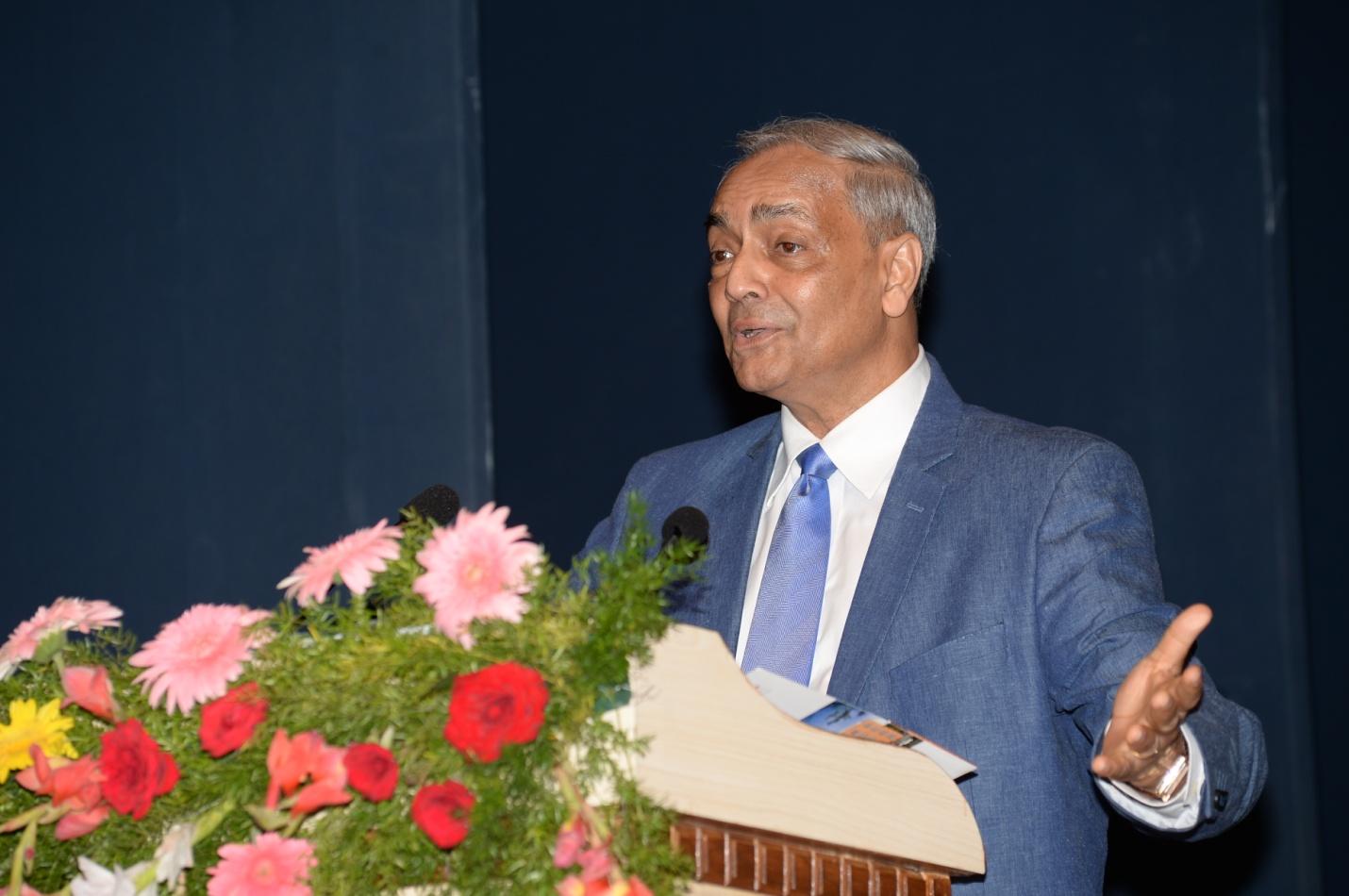 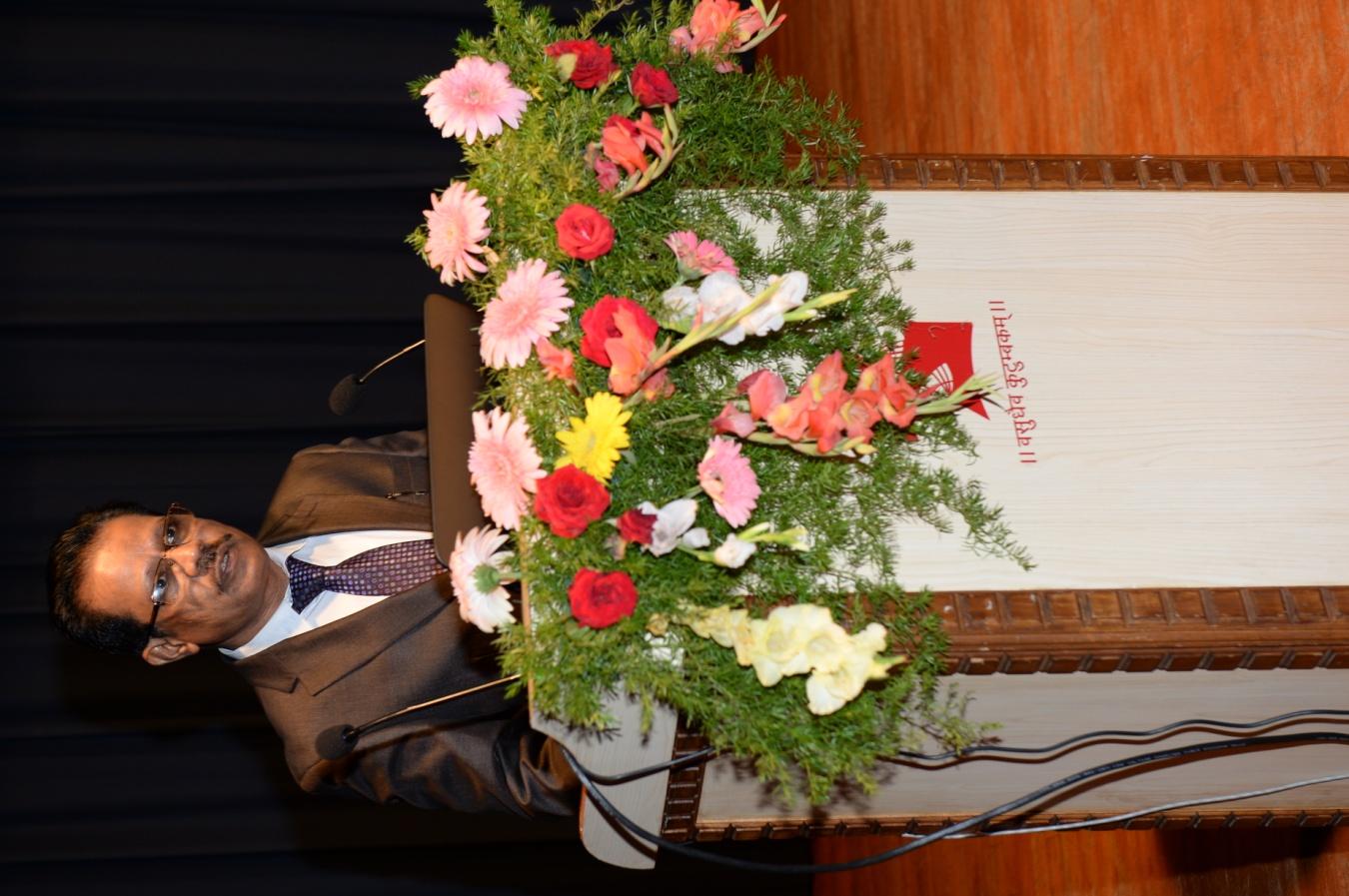 Symbiosis Law School, Pune through its Community for Legal Care Centre’s ADR Cell and with the help of its volunteers, organized a Capsule Course on International Commercial Arbitration on 24thAugust, 2016 from 9:30 am to 3 pm. The Chief Guest for the event was Hon’ble Justice Mr. Mohan Pieris, Former Chief Justice, Supreme Court of Sri Lanka. The Guest of Honour for the event was Mr. Sumant Kolhe, Principal District Judge, Pune District Court.

The session began with felicitation of the dignitaries by Dr. Shashikala Gurpur, Director, Symbiosis Law School, Pune, Dean, Faculty of Law, SIU. She also addressed the gathering and spoke about how this was an academic gathering and she fervently hopes that the audience leaves this course more enlightened and a step closer to their goals of becoming better and more learned people. She exemplified how the audience may take inspiration from the dignitaries, Justice Mohan Pieris and Hon’ble Mr. Sumant Kohle.

The Guest of Honour, Shri Sumant Kolhe, thereafter spoke about how he really respects SLS, Pune and how he feels that Dr. Shashikala Gurpur is a luminary of the legal field upon whom, we all can look up to. Then he went on to talk about the history of arbitration laws in India and its constant development from 1940 to 1996 and till today in 2016. He brought up the issue of requirement of speedy justice in India and how arbitration is an answer to many such issues. He highlighted upon the growing presence of alternative dispute resolution and how international commercial arbitration is becoming a very important part of the culture of lawyers abroad. He addressed the issue of how international commercial arbitration is slowly but surely gathering steam in India as well and how it will not be long before we too, have completely caught up with the rest of the world. Shri Sumant Kohle mentioned how the uniform procedure and rules conceived by the United Nation Commission of International trade law. The Indian Arbitration & Conciliation Act, 1996 is modeled on the standard set by the UN commissions especially after the amendments made to the Act by the ordnance of 2015. He went on to point out the important provisions of the said ordinance. He concluded by stating that the students of Symbiosis Law School, Pune should be proud of their heritage and shall carry the name forward in honour.

Justice Pieris, stated that the students may not be able to imagine what the scene of arbitration is, so riddled with histrionics. He emphasized on how he hopes that the upcoming generation of lawyers may not repeat the mistake, the lawyers of his generation made. He stated how arbitration is not child’s play. “Alternate Dispute resolution mechanisms, are not things to be dealt with simply “, he bellowed to the audience. He illustrated the facets of an arbitration agreement and then went on to quote renowned professors and dignitaries in the field of arbitration. He explained upon the different aspects of arbitration and drew a structure which might be followed by arbitrators and the entire scheme of arbitration. He stressed on the importance of party autonomy and the law prevailing at the time of the dispute with reference to the law of the contract. He quoted Redfern & Hunter by saying, “The parties have the right to change the law pertaining to the contract. A choice of law clause can be simply amended.” He very philosophically stated, “We are all dreamers. Ingenious dreamers at that! Commercial contracts are not for charity. Today, there might not even be room for sovereignty.”  He also cited different arbitrations which have been treated as landmark cases that have time and again defined what arbitration shall stand for in today’s day and ages to come.

In the Second Technical Session, Hon’ble Justice Mohan Pieris proceeded to give an illustrating speech on the complex web of laws and rules governing and regulating International Commercial Arbitration. He finally concluded by elaborating on the different kinds of governing law clauses and stressing on the flexibility and range of the governing law clauses.

Both the sessions were followed by enlightening question and answer session. Prof. Shirish Kulkarni, Assistant Professor, SLS, Pune also graced the occasion. The capsule course saw participation by approximately 200 students with around 20 participants from outside the college.

Event concluded with the vote of thanks proposed by Dr. Rupal Rautdesai, Associate Professor, SLS, Pune.