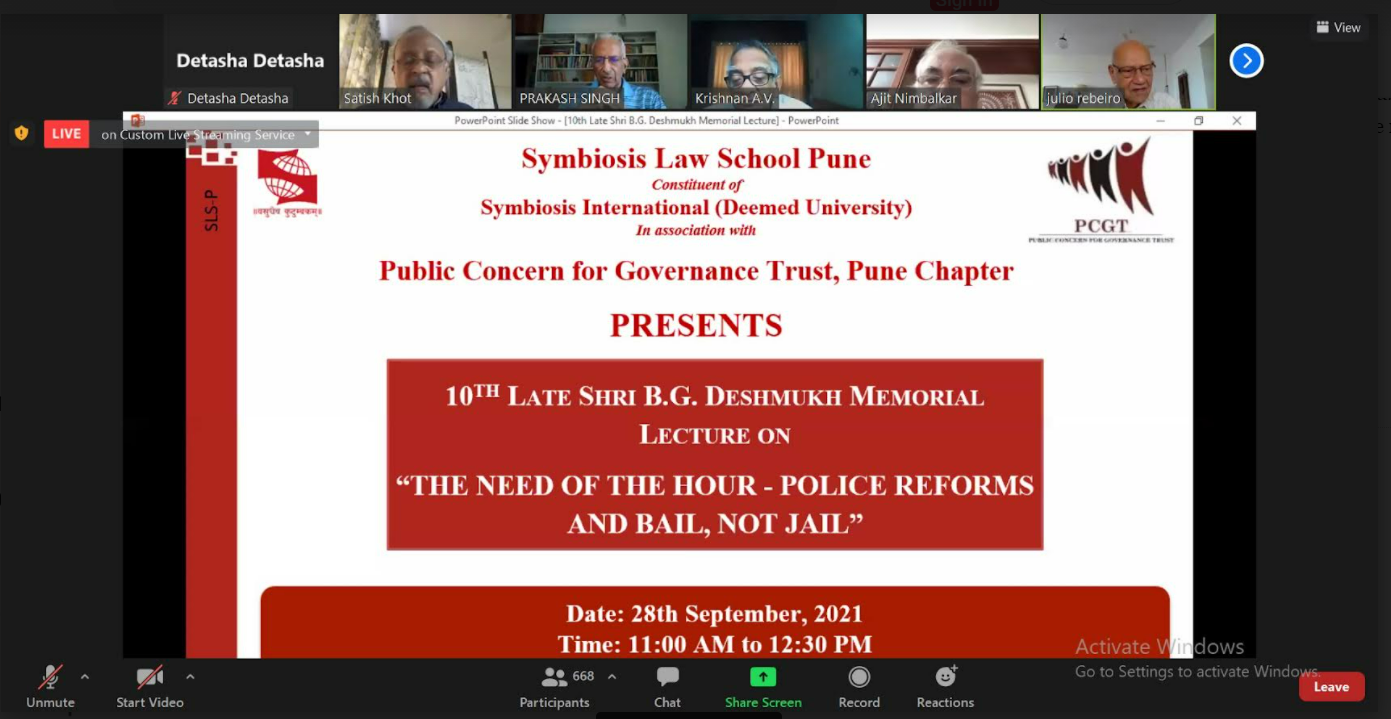 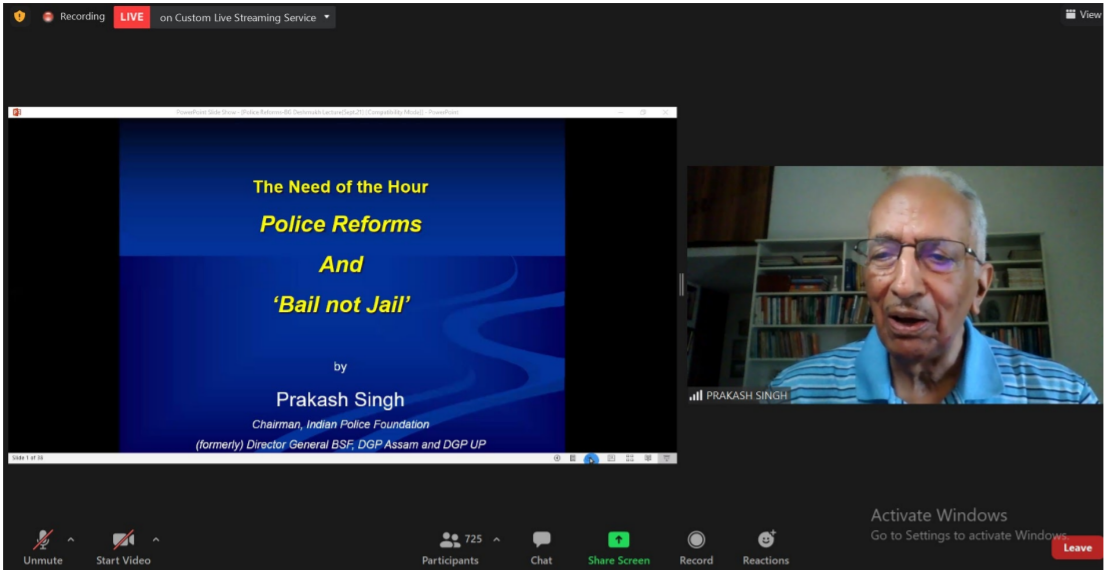 Symbiosis Law School Pune, a constituent of Symbiosis International (Deemed University), in association with Public Concern for Governance Trust (PCGT), Pune Chapter organised the 10th Late Shri B.G. Deshmukh Memorial online lecture on, “The Need of the Hour- Police Reforms and Bail, not Jail." The lecture was conducted on the virtual platform, on 28th September 2021 at 11:00 a.m.

Symbiosis Law School Pune, a constituent of Symbiosis International (Deemed University), in association with Public Concern for Governance Trust (PCGT), Pune Chapter organised the 10th Late Shri B.G. Deshmukh Memorial online lecture on, “The Need of the Hour- Police Reforms and Bail, not Jail." The lecture was conducted on the virtual platform, on 28th September 2021 at 11:00 a.m.

Mr. Satish Khot, Vice Chairman of PCGT narrated the history of PCGT and reiterated its goal to improve the quality of good governance in India. He highlighted achievements of PCGT and appealed for the participation of young generation in realizing its goals. Mr. Khot extended an invitation for further collaboration with SLS-P in furtherance of the objectives of good governance.

Mr. Ajit Nimbalkar IAS (Retd.), and a Member of PCGT, in his tribute to Late Mr. B G Deshmukh recalled his association and great memories with him. He in his high regards to Late Mr. B G Deshmukh underlined his astounding personal traits as an extraordinary civil servant, great worker in private sector, crusader of social justice, and a prolific author.

Mr. Singh delivering the late B.G Deshmukh memorial lecture recalled incredible service of Late B.G Deshmukh to the nation. Mr. Prakash Singh in his detailed address as chief guest of the function pointed out the lacunae in the existing police system, referring it as an unfinished agenda since independence. Mr. Prakash emphasized the urgency of police reforms to insulate police force from external pressures and improvements in the service conditions of police personnel. Mr. Singh spoke about the myriad challenges in implementing apex court’s dictum on police reforms. He referred aversions of the police force, unresponsive bureaucracy, ill-informed public, inter alia are some of the formidable challenges that need immediate attention. He suggested radical reforms in the Indian police system that include observing the international standards in maintaining the police system, reforms in workforce stations and to establish parity between male and female police ratio. Finally, he suggested the workload and mental health of the police needed immediate reconsideration. Mr. Singh concluded his address by stressing the need for a professional police force in India committed to uphold the rule of law.

Mr. Mahesh Zagade, IAS (Retd.) Chairman, PCGT, Pune Chapter, in his concluding remarks reflected on the dismal account of the Indian Police system. He appealed young audience to play a decisive role in initiating requisite reforms and contribute in this just cause of nation building and at last he stressed upon innovation in governance.

This public law lecture was followed by a question and answer session moderated by Mr. Satish Khot, Vice Chairman, PCGT.