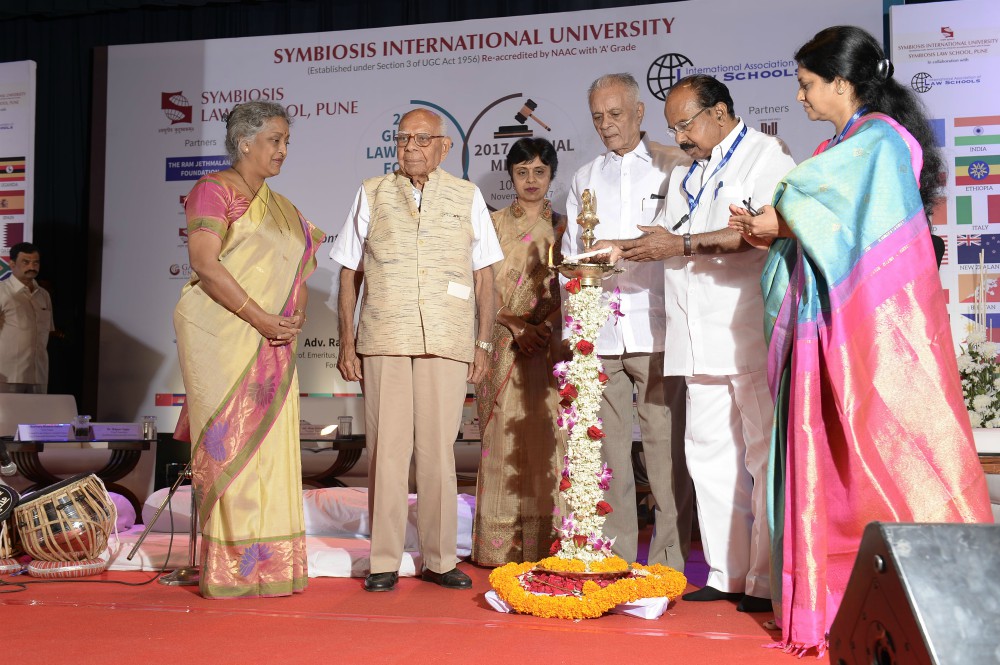 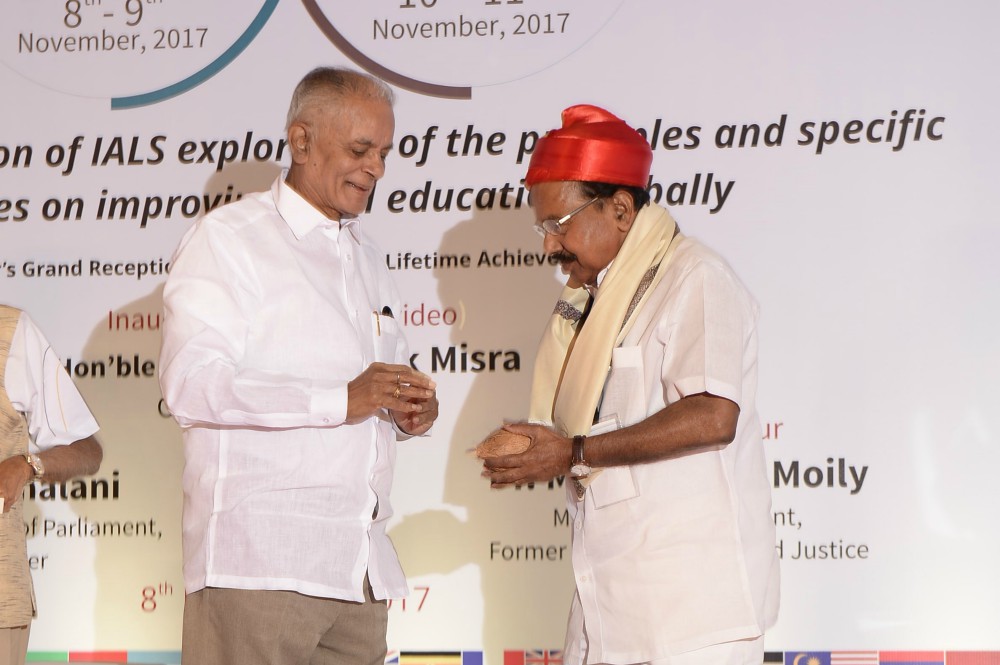 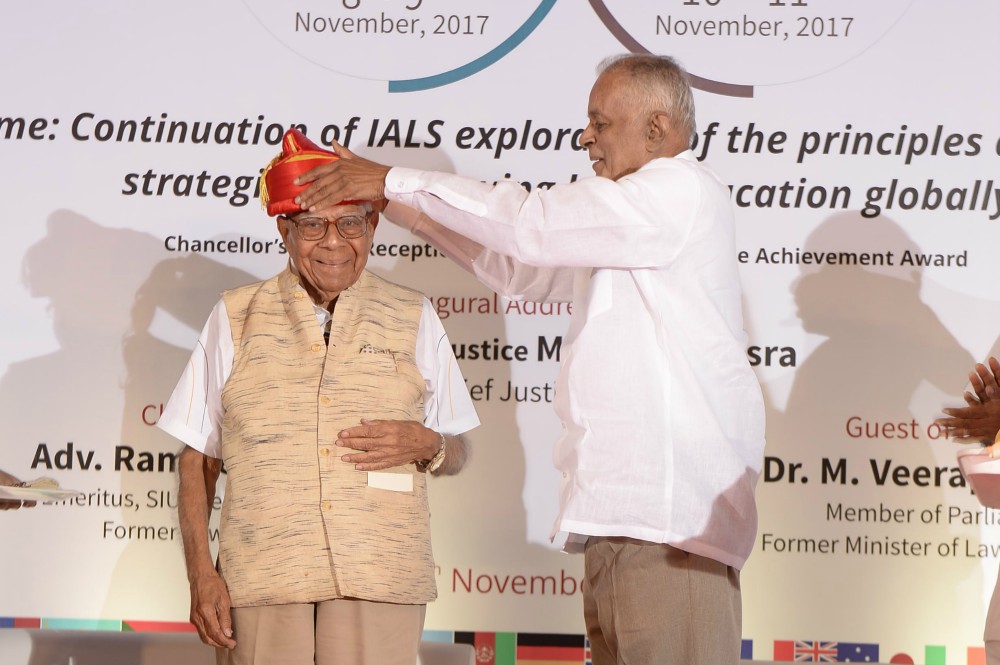 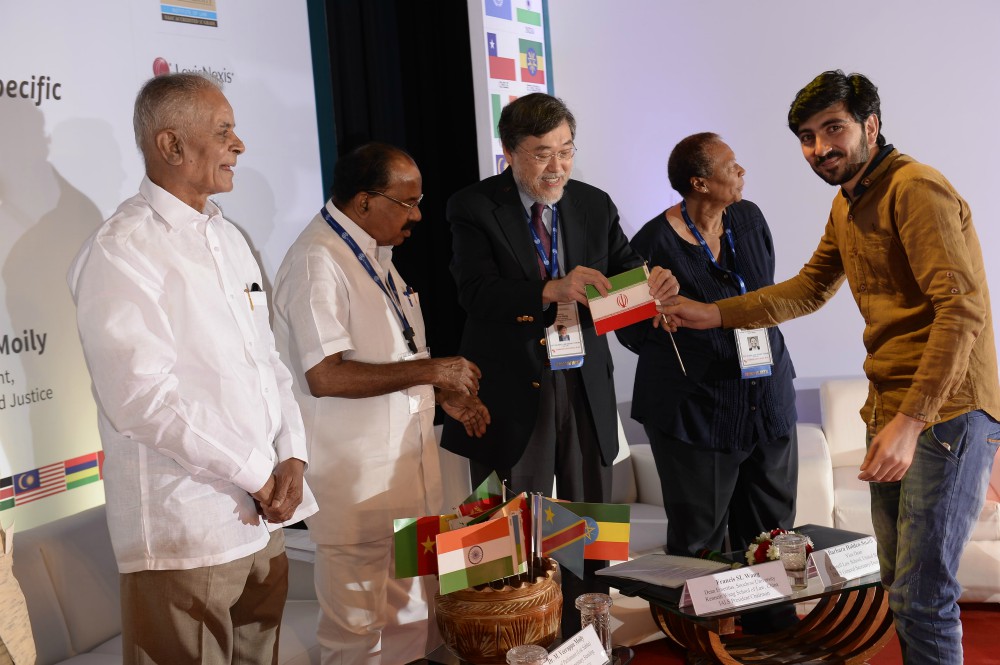 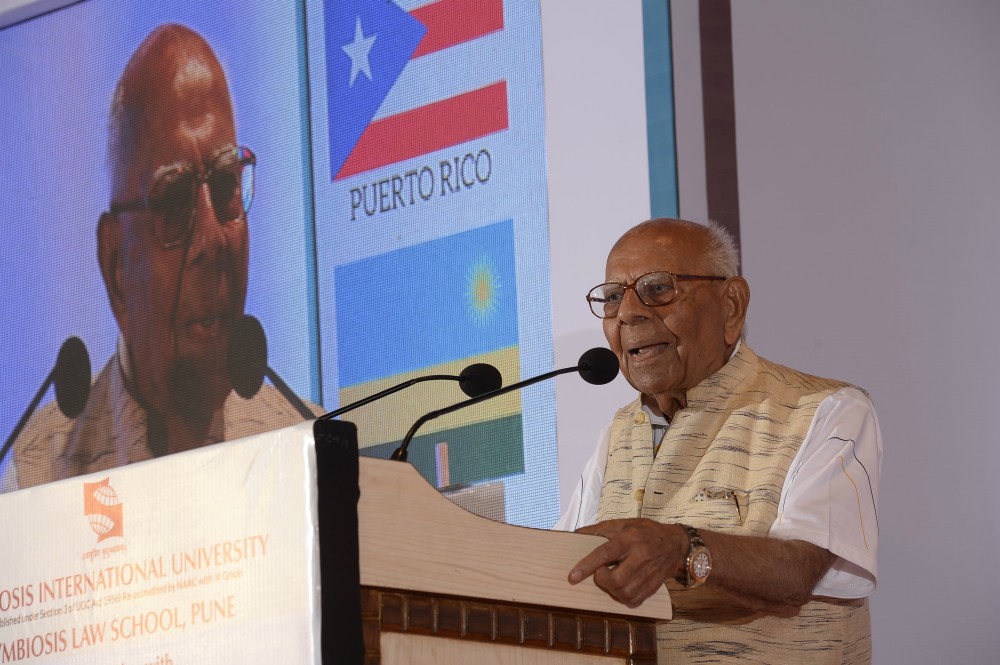 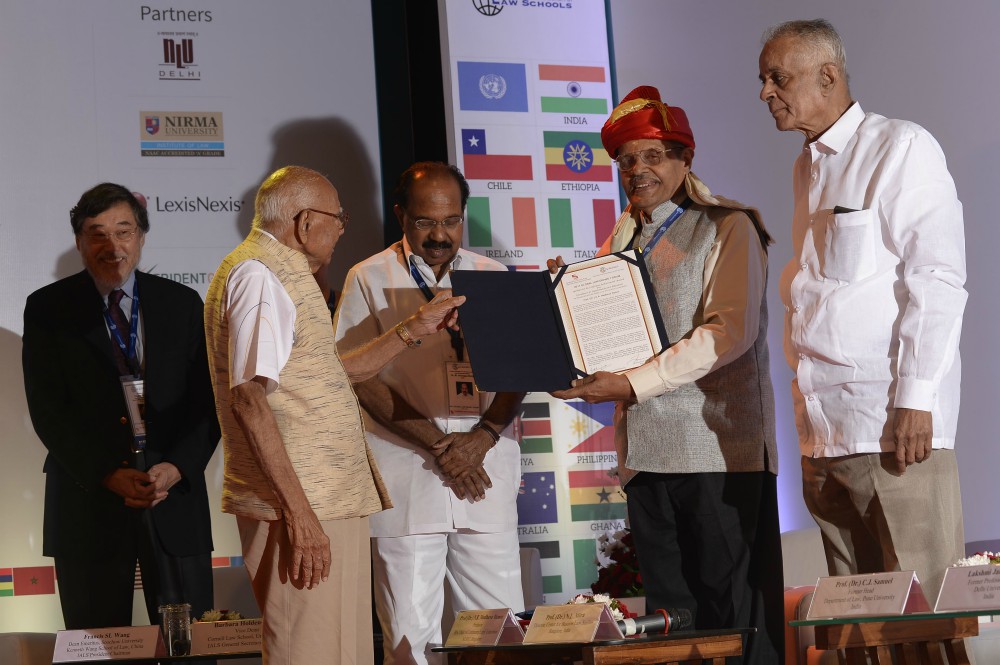 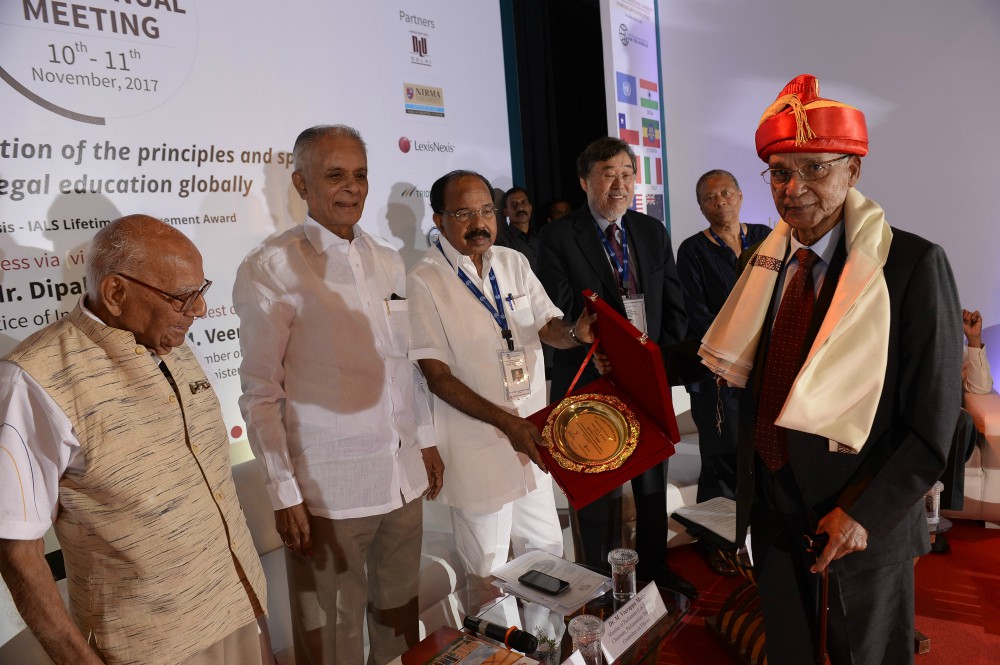 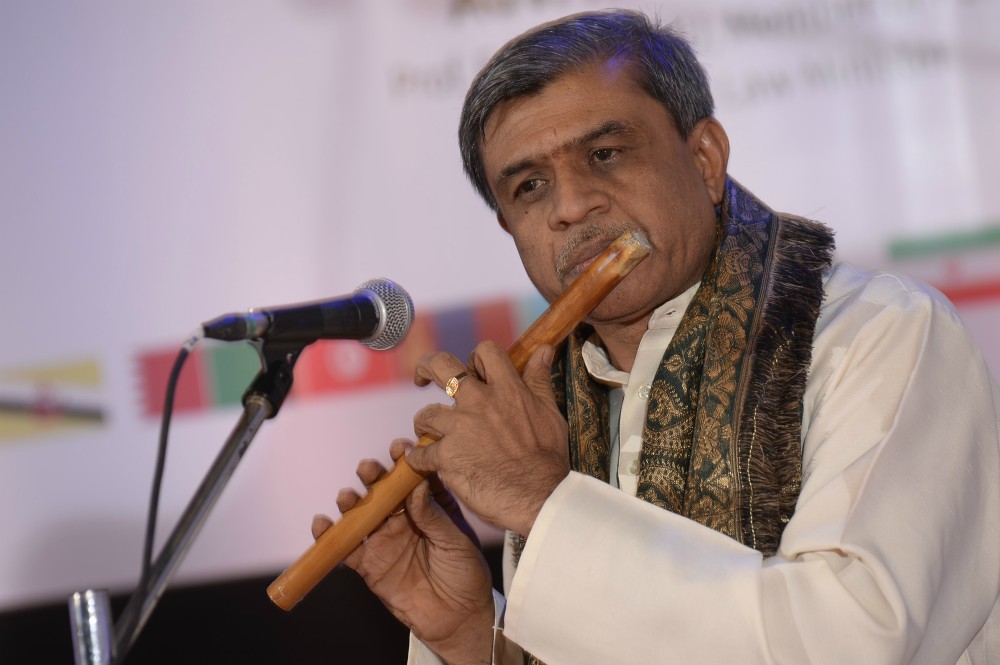 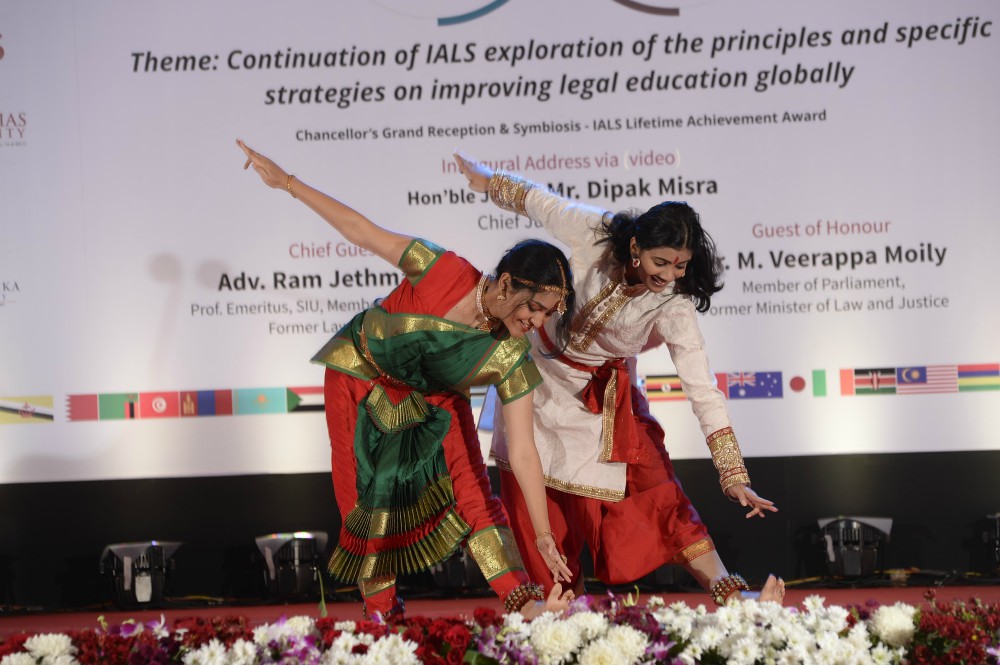 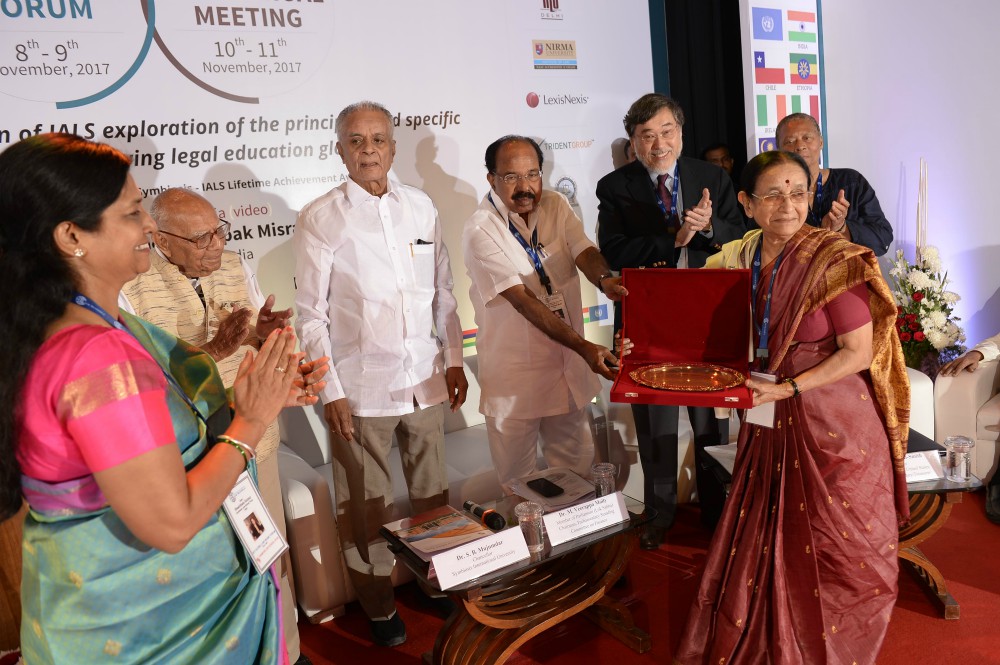 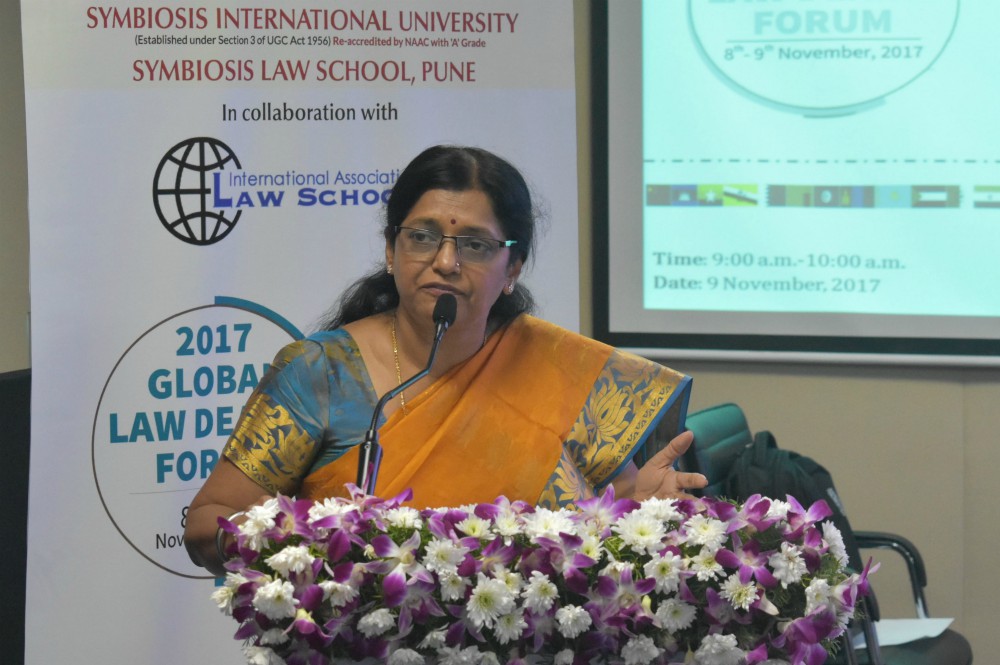 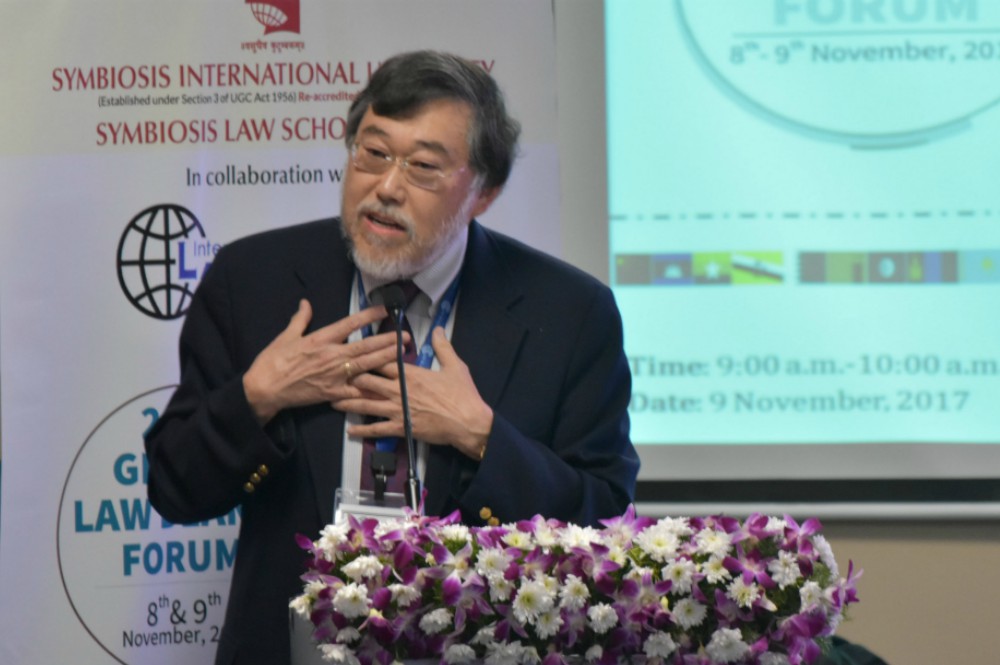 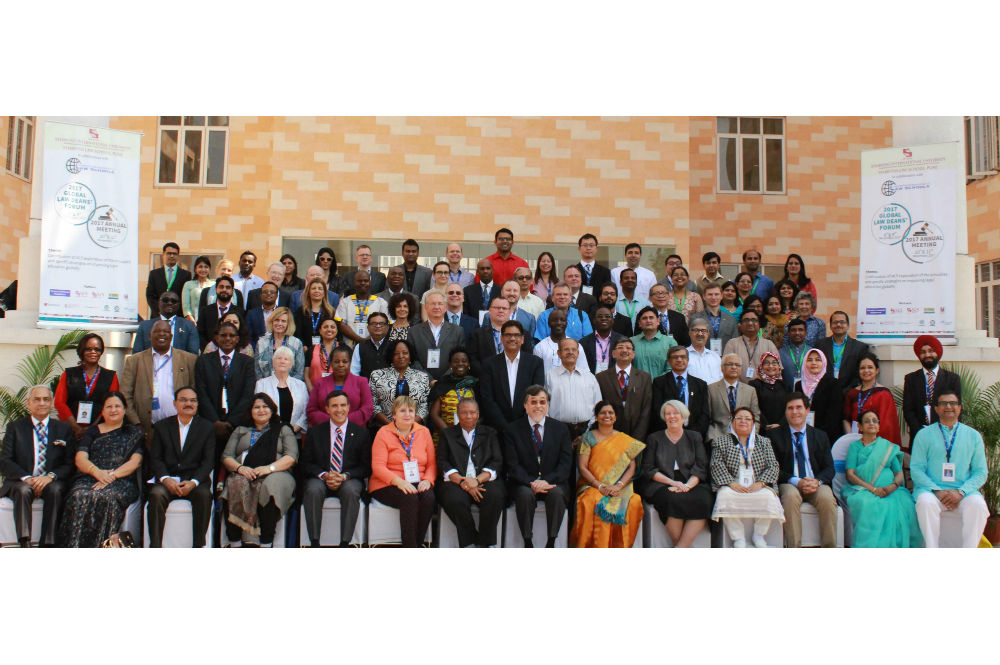 Inauguration commenced with lighting of the auspicious lamp followed by a soulful rendition of the holy Ganesh Vandana by Mr. Kshitij Asthana, a third-year student of SLS-P.

Prof. (Dr.) S. B. Mujumdar, Hon’ble Chancellor, SIU, Pune, began his address by offering gracious thanks to IALS for giving SLS-P the opportunity to host the grand event. He traced the genesis of SLS-P from its inception in 1977. He put on record that the private sector caters to 69% of the demand for higher education in India, and heralded quality education as the oxygen for the growth, sustenance and development of the country.

The essence of the SIU motto - Vasudhaiva Kutumbakam- ‘The World is One Family’- was captured in the gesture of the international students representing 85 different countries, in presenting Prof. Francis SL Wang, Dean Emeritus, Soochow University, Kenneth Wang School of Law, China and IALS President/Chairman the flags of their respective countries.

Dr. M. Veerappa Moily, Member of Parliament (Lok Sabha), Chairman, Parliamentary Standing Committee on Finance, Former Law Minister, India, the Guest of Honour began by quoting the famous words of Justice Oliver Wendell Holmes, “The Life of Law is not Logic, but Experience”, and he hailed the Chief Guest, Adv. Ram Jethmalani, as an embodiment of these words. He commented on the dynamic nature of law and said that the legal systems all over the world have developed through each other’s experience, which increases the importance of the Global Law Deans’ Forum. Dr. Moily stated that ‘Law is a tool to achieve Social Justice’, and opined that the conference will help the actualization of common as well as differential goals. The honourable speaker commended SIU for its international initiatives, its association with 85 countries being a testimony of the same. He opined that such international initiatives of SIU were the reason that it had been chosen to host an event of such magnitude. He concluded his enlightening speech by saying, ‘Justice is the only weapon to ensure stability in society and if one wants peace, one must work for justice’.

Adv. Ram Jethmalani, Member of Parliament (Rajya Sabha), Senior Advocate, Supreme Court of India and Professor Emeritus, SIU, the Chief Guest, stated that two issues of utmost importance, in India today, are the misuse of religion and the weak character of politicians. These two issues require immediate attention, social interest and study. He urged the gathering to read the book called, “Religion Gone Astray”, which is co-authored by a Jewish Rabbi, a Christian Pastor and an Islamic Imam. Mr. Jethmalani went on to exhort the audience to be vigilant so that abuse of power can be checked.

50 % of the awardees are involved in the law reforms and more than 60 % of these have contributed towards education, judiciary, and public service. 50% of them have rendered time and expertise to excellence at SLS as Board of studies members or as visiting faculty or as experts. Dr. Madhva Menon & Advocate Ram Jethmalani epitomize maximum part. Mr Jethmalani, our Professor Emeritus and prominent patron of this event also holds additional feathers in his hat with representation in the parliament. Their Life is a living monument in the path of evolution of legal education and symbol of possibilities for a life dedicated to the rule of law and cause of justice.

Dr. Shashikala Gurpur, Director, SLS-P, Dean, Faculty of Law, SIU, (Convener, GLDF & AM-2017 and IALS, International Study Group Chair) delivered the vote of thanks. The Chancellor’s Grand Reception was followed by a cultural event by the international students of SIU as well as students of SLS-P, which featured Indian traditional music, dance and flute recital by Dr. C. A. Gurudath, Dean Academics, Jagran Lake City University, India accompanied on tabla by Mr. Tejas Joshi, the grandson of Pandit Bhimsen Joshi.