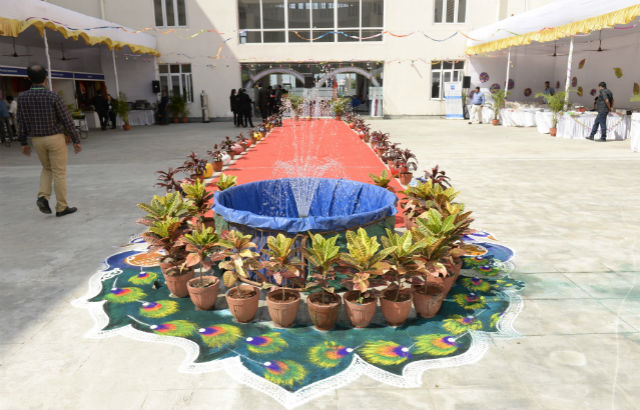 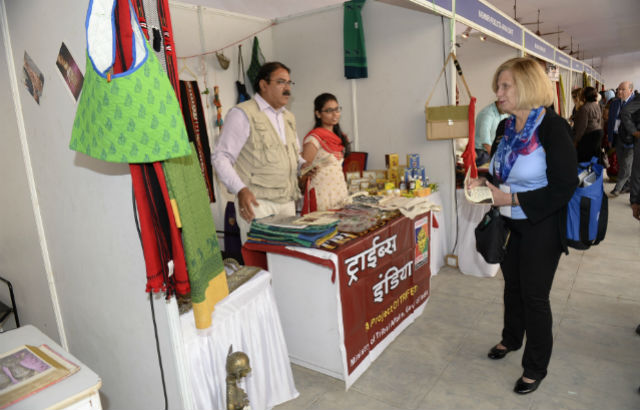 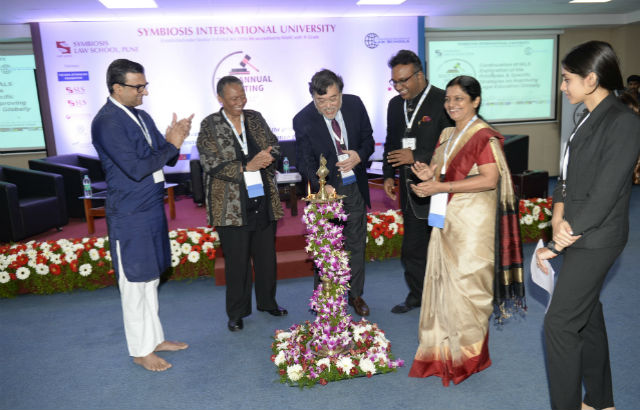 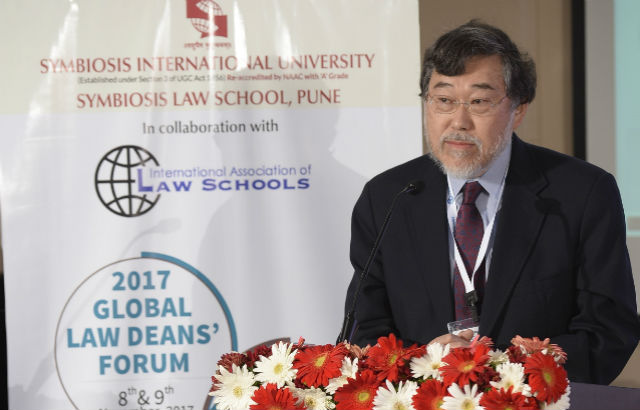 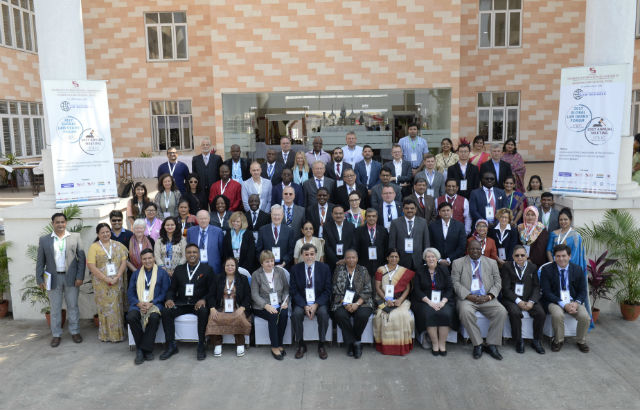 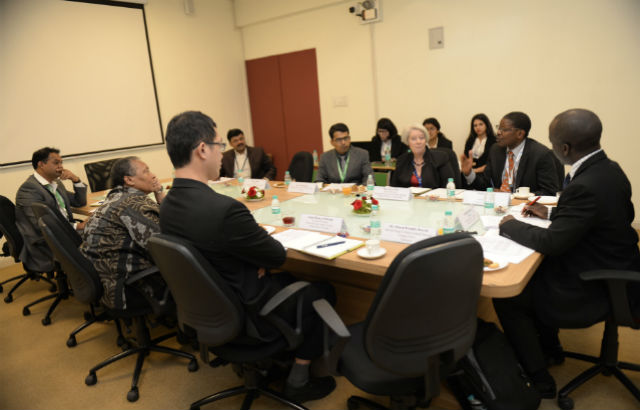 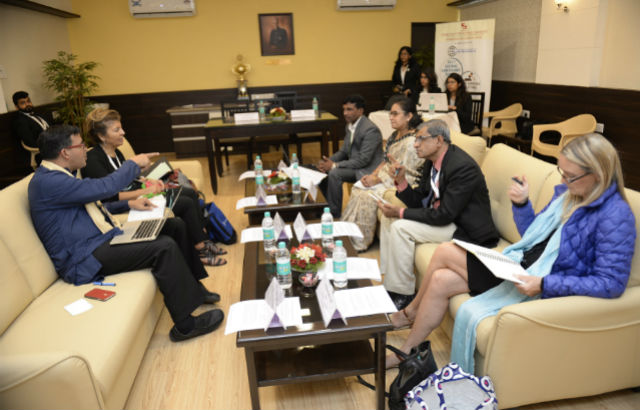 Symbiosis Law School, Pune, (SLS-P) a constituent of Symbiosis International University, Pune (SIU) in association with the International Association of Law Schools (IALS), successfully hosted IALS Annual Meeting 2017 from 9 th to 11 th November, 2017 at SLS, Pune Campus. This provided a platform where law school leaders from across the world congregated to discuss and formulate new strategies to improve legal education globally. IALS Annual Meeting, 2017 had ‘Innovative Pedagogy, Harmonized Curriculum and Global Networking for Implementing Change’ as its theme. The event, a highly prestigious one was unique as it was for the first time in India that a private law school brought together eight national and five private law schools- exhibiting a rare model of solidarity- to co-host and welcome international Law Deans to deliberate on the crucial issue of global standards in legal education.

In the words of Prof. Francis SL Wang, Dean Emeritus, Soochow University, Kenneth Wang School of Law, China, President/Chairman of IALS, “IALS is the voice of global legal educator community to give voice to the desire of inculcating Rule of Law as a cherished value among students, judiciary and legal community. The Symbiosis Pune conference is about moving forward in terms of bringing new awareness with involvement of Carnegie Foundation which is known for advanced research on education from interdisciplinary perspective. This also indicates departure from the information acquisition model of education to the innovative participatory and personally engaging model. The meeting would reflect on refining and operationalizing this model based on building consensus across the global diversity.”

The Annual Meeting was officially initiated on 10 th November, 2017, at Symbiosis Law School, Pune with the welcome address by Dr. Shashikala Gurpur, Director, SLS-P, Dean, Faculty of Law, SIU, (Convener, GLDF & AM-2017 and IALS, International Study Group Chair). She encouraged the academicians to visit “Law Carnival” - a unique feature of the conference that would help them de-stress and make the conference more pleasurable. She concluded by thanking the faculty and students for their unwavering support and hard work.

The first plenary session of the IALS Annual Meeting of 2017, was held in the Multipurpose Hall of SLS-P. The theme of the session was‘Innovative Pedagogy in Doctrinal Fields’and the session commenced at 9:45 AM, with Patricia O’Sullivan, Director of Medical Education, University of California, San Francisco Medical School, United States chairing the session. Patricia O’Sullivan opened the discussion by elucidating the meaning of pedagogy for all the delegates. She clarified that pedagogy is not merely about theory or instructional technique but also the practical teaching and the environment in which one teaches.Working in groups with peers and permitting students to work differently and independently, according to Patricia O’Sullivan go a long way in motivating students. In conclusion, she opined that the most important thing for a teacher was to develop pedagogy and the method of imparting knowledge so as to ensure the knowledge possessed by the teacher passes on to the students.The Plenary Session was followed by Small Group Breakout Discussions where the theme of the Plenary was further discussed.

The 2 nd plenary session had ‘Doctrinal Study Groups: Towards a Harmonized Subject Matter Curriculum Which Respects the Diversity of Contexts and Approaches’as its theme, chaired by Luis Gabriel Franceschi, Dean, Strathmore University, Strathmore Law School, Kenya and IALS Board Member, Chair of the Constitutional Law Study Group. The Chair, Luis Gabriel Franceschi, summarized the arguments of the panel and reflected on the state of legal education in countries which are underdeveloped and do not receive sufficient funds. Small Group Breakout Discussions following the Plenary witnessed scholarly discussion and sharing of ideas on the propositions discussed in the Plenary.

The General Assembly for the Annual Meeting, 2017 held after the Small Group Breakout Discussions was presided over by Francis SL Wang, Dean Emeritus, Soochow University, Kenneth Wang School of Law, China and IALS President/Chairman and Barbara Holden- Smith, Vice-Dean, Cornell Law School, United States and IALS General Secretary/Treasurer. Barbara Holden-Smith spoke about the previous venues of IALS Global Law Deans’ Forum and Annual Meeting, 2017 and future venues where the same will be held. She also spoke about study groups, which witnessed the participation of more than 100 faculty members. She also spoke about the Chairs and structure of the study groups and also the goals of the same. She enlightened the audience about the Visiting Professor Programme and the evaluation,assessment and certification programme of IALS. Planning for the future of IALS with respect to the Governance, both present and future, and the work and responsibilities of the Board Committees and the Board of Governors, were also topics of discussion.

The Conclusion of the IALS Annual Meeting, 2017 was held in the Multi-Purpose Hall of SLS-P, from 1.00 PM to 1.20 PM. The speakers for the event were Dr. Shashikala Gurpur, Director, SLS-P, Dean, Faculty of Law, SIU, (Convener, GLDF & AM-2017 and IALS, International Study Group Chair) and Francis SL Wang, Dean Emeritus, Soochow University, Kenneth Wang School of Law, China.

The session began with a preview of universities that partnered with Symbiosis Law School in hosting IALS. Francis L. Wang, the first speaker, thanked the organisation and the volunteers for their participation, and remarked that the events were conducted with grace and warmth and had seen the growth of all the participating members. He then spoke about the action plan that needs to be operationalised for the future, keeping in consideration the conversations that questioned and looked at the rule of law, and also keep the dialogue going by holding regional meetings throughout the world.

Dr. Shashikala Gurpur, Director, SLS-P, Dean, Faculty of Law, SIU, (Convener, GLDF & AM-2017 and IALS, International Study Group Chair), expressed her gratitude towards the diverse audience, and took the opportunity to appreciate their inputs that the esteemed participants have contributed to the agendas formed in IALS. Dr. Gurpur mentioned that through the platform of GLDF and AM, 2017 a strong ethical footing to the purpose has been built. She hoped that in the future, there would be participants from major transnational organisations and also anticipated the return of the esteemed guests. She concluded her speech by expressing gratitude towards all the faculty, staff and students of SLS-P in making the event a successful endeavour.

The grand event concluded with a cultural tour to Aga Khan Palace, Pune.