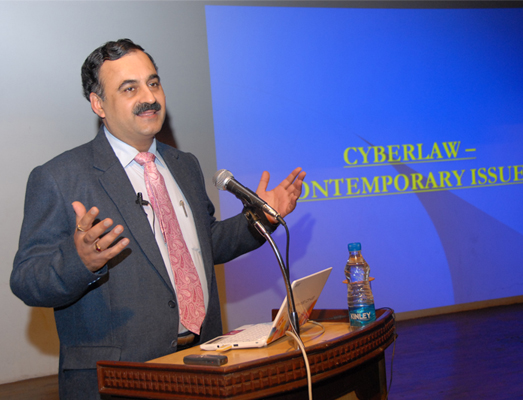 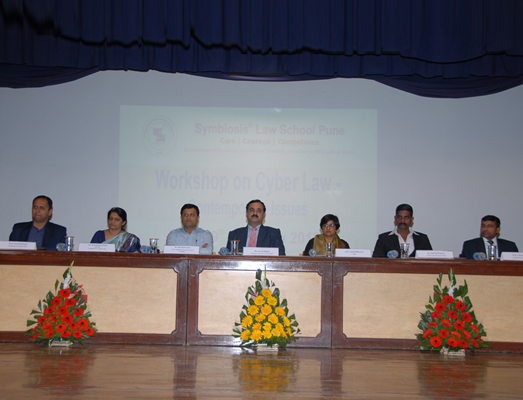 Symbiosis Law School, Pune, the constituent of Symbiosis International University, Pune, in its quest for gaining legal excellence, with the support of the Tech Legal Cell has successfully organized the workshop on "Cyber Law: Contemporary Issues".

The participants and dignitaries were greeted by Dr. Shashikala Gurpur. She delivered the welcome address while appreciating the Tech Legal Cell in organizing the seminar on "Cyber Law: Contemporary Issues", insisted on the importance of wholesome education, contextualizing law with the skills in non-law stretches and application level training. Talking about the changing context of cyber laws in the present scenario, she remarked that "law is no more a lame companion to technology".

The first speaker of the business session, Adv. Pavan Duggal, while quoting various cases and contemporary issues, stated the necessity to wake up and see where the cyber age is leading us to. He narrated how seemingly ordinary situations invoke provisions under the Information and Technology Act (2000) with the help of cases like the Birthday Cake case and the Sanjay Chaudhury Agra Facebook Post case. He also mentioned some interesting facts by which he turned situations which the audience had already encountered in their lives, into unfamiliar, strange and thought provoking exercises. He also expressed his concerns over growth in cyber crimes and called cyber laws in India a "toothless wonder". He further mentioned that it is the lack of awareness about the consequences of cyber law and a lack of international agreements or harmonious institutional mechanisms that leads the future of cyber laws to a grim, dark and uncertain playground.

Mr. Harold D'Costa spoke on the issues with respect to social networking and cross boundary jurisdictions. He also mentioned about the necessity in protecting yourself from the potential dangers of the cyber world. He explained how information is becoming increasingly insecure with cyber terrorists using it to spam, create fake identities and ultimately as a means to cyber warfare.

Mr. Roshan Bangera spoke on crimes relating to mobile phones, sim cloning and other similar crimes. Adv. Vaishali Bhagwat spoke on how the admissibility of Digital evidence in cases are determined and how proving records still remains a challenge due to the transient nature of digital evidence.

Prof. Swapnil Bangali spoke on Sec. 66A of the Information and Technology Act (2000). He remarked that Social Networking is the most effective and modern mode of communication in today's world, but, the amount of content liability it creates for the user is huge. The legal position in India as to interpretation and the effective implementation of Sec. 66A are core issues that require attention. He insisted on the importance of understanding the object behind the provision, powers of the law enforcement agencies, the rights of the accused, judicial interventions and penal and procedural laws for the time being in force.

This was followed by the Vote of Thanks by Prof. Rupal Rautdesai. She thanked the dignitaries for their gracious presence and recognized the importance of application level training for law students. She appreciated the untiring efforts put in by the members of the Tech Legal Cell, the audience and faculty members in making this event a success.