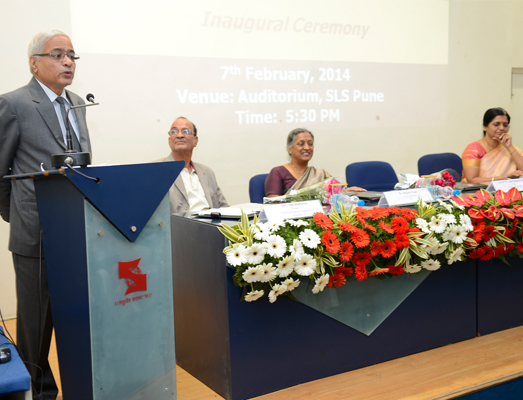 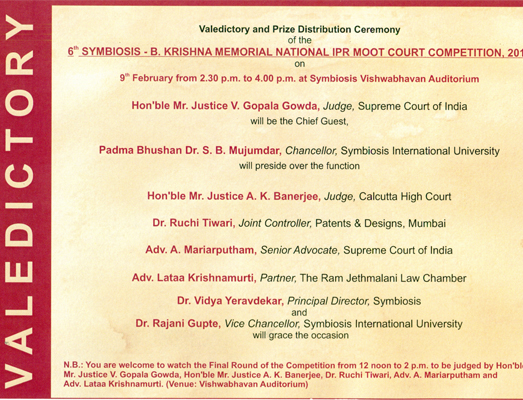 Commencement of the program was marked by lighting of the lamp by the dignitaries on the dais followed by the garlanding of Late Shri B. G. Deshmukh’s photograph by Mr.UjjwalChoudharyIRS, Director General of Income Tax (Investigations), Patna Dr. S.B. Mujumdar, Chancellor, SIU.

Mr. S.C. Nagpal, Chairman PCGT, introduced PCGT and elaborated its role in raising and solving the social causes such as water problems, crime against women and corruption today. He also introduced the theme of the Memorial Lecture 2014.  He explained the concept of good governance and the role of PCGT in it.

Mr. Satyabir Dodd, Member, Advisory Council, Pune Chapter, PCGT, threw light on       Late Shri B.G. Deshmukh’s life. He said, Shri B. G. Deshmukh, a pioneer to join Indian Administrative Service through competitive examination from then Bombay State in 1951 and the Founder Chairman of Public Concern for Governance Trust (PCGT), was a true leader from public administration and civil society. Using various anecdotes from his life, he threw light upon various posts held by Shri B.G. Deshmukh and his contribution to the civil society.

Mr. D. V. R. Rao introduced the Honourable Chief Guest and Keynote speaker Mr. Ujjwal Choudhary. The Chief Guest began his lecture on corruptionby reiterating its rampant presence in the country and said that corruption has allowed less deserving people to come forward. He added that it distorts public policy, flouts the system and ruins and destroys the poor because they are the collateral damage. The people have a clear notion as to what triggers corruption but sometimes they confuse the cause with the symptoms. He continued to list some of the reasons, namely governance deficit, funds not provided, no manpower and the system being unable to deliver.

He spoke about the contradictory character of Government policies to people’s opinions. Even though the people’s opinions are asked, the Government takes no steps to implement them. The Government needs to build credibility. This can be done by transforming the system into one of reward and not of punishments. Good deeds need to be recognised in order to motivate the workforce of the nation. He also pointed out that individuals have no power over global phenomena. Accountability needs to be established. A system of checks and balances needs to be implemented in order to know who is responsible for what. Strict procedure, especially in the cases of issuing licenses, submission of documents and various others, need to be put in order so that people with undue power do not use it arbitrarily.

He mentioned that at a very basic level, people need to be educated about the rules and regulations. They cannot expect the Government to act for them if they do not follow proper procedure. He concluded by saying that at the end of the day, it is in our hands and we should endeavour to spread awareness in our own personal capacities.

At the end of the enlightening address, felicitation of Mr. UjjwalChoudhary by Dr. S.B. Mujumdar took place which was followed by the Presidential Address by him. In this address he spoke about the tools to reduce corruption. He said that corruption cannot be eliminated, it can only be reduced. He said that governance needs to percolate through the layers from top to bottom. He also spoke about technology as a tool.

The programme came to an end with the vote of thanks by Dr. Shashikala Gurpur, Director, Symbiosis Law School Pune and Dean, Faculty of Law, SIU. In her speech she emphasised that Advocacy is not limited to the court and that the return of Environmental Law is the need of the hour.

The Krishna National IPR Moot Court Competition-2014 is going to witness various historic moments this time. It is going to be a unique blend of substantive laws and the procedural requirements of intellectual property regime prevalent worldwide. The usual IPR Law based problem this time is based on national and international arbitration laws too. Justice Patil and Dr. Rajani Gupte took the audience by surprise by inaugurating the first ever symbiosis live webcast portal which will cover the final rounds including the Valedictory ceremony just by clicking at the link: http://gowebtechnology.com/live-events/sls/webcast.html

Dr. Rajani Gupte, Vice Chancellor, SIU, in her inaugural address emphasized upon the need of practical learning. She said that Dr. Gurpur's innovative vision is playing a vital role in translating it to reality. She further added that, the innovation in the field of education, which has been witnessed by Law or Business school, has in fact opened doors for a more profound personal and friendly teaching experience that further the knowledge of the students.

Welcoming the participants, Dr. Shashikala Gurpur, Director, Symbiosis Law School, Pune and Dean, Faculty of Law, SIU, said that the Symbiosis Education Culture focuses both on classroom and the practical learning. Highlighting the Moot court association and its activities she said that mooting is a part of life cycle of students in Symbiosis, imbibing in them the skills required for excellent advocacy.

Adv. Shri R. Muralidharan gave the participants an introduction to the competition and emphasized the need for a skill based learning experience. He stressed on the need to protect knowledge that we create and predicted that there will be a high demand for patent lawyers in near future. Advocate Muralidharan provided valuable advice to the competing mooters to help and navigate their way through the intricately designed moot problem in the field of Patents. According to him, it is not how much you know but how much you articulate in short time that matters.

In his address, Hon'ble Mr. Justice J.A. Patil, stressed upon the role of moot competitions in sharpening the advocacy skills. Recollecting his student days he said that these skill developing, practical events were not present for the benefit of lawyers then. According to him, Law is the last word given by the last court and the observations of the Supreme Court become the Law of land.

The valedictory and Prize Distribution Ceremony will be held on 9th Feb 2014 at 2:30 pm in the Vishwabhawan Auditorium.

Hon'ble Mr. Justice V. Gopala Gowda, Judge, Supreme Court of India, will be the Chief Guest for the function.