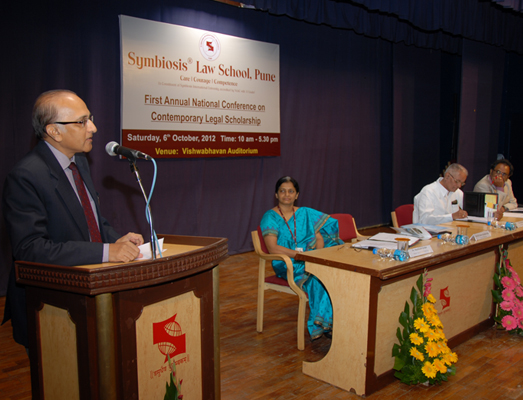 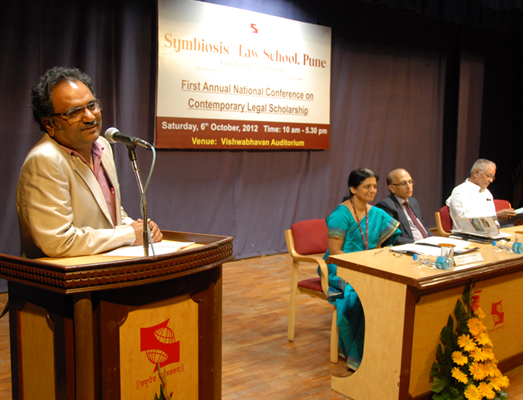 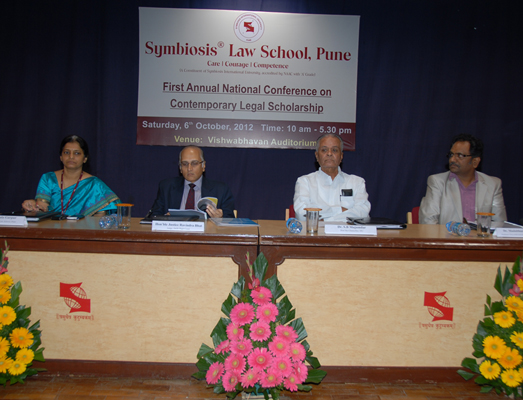 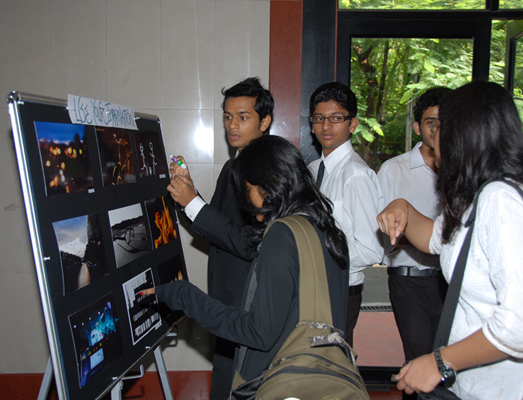 Symbiosis Law School, Pune succesfully organized its First Annual National Conference on Contemporary Legal Scholarship on 6th October 2012, in Vishwabhawan Auditorium from 10:00am to 5:30pm. It was organised in the background of its flagship Journal SCLJ and the student Journal SSLR scheduled to be published with Lexis Nexis, to showcase in house research and to provide platform for such legal research across India

The progrmme began with the lighting of lamp by the dignitaries on the dais along with two students.

Dr. Gurpur started her welcome address with Tagore's line stating, "If not light a big lamp, light smaller one." Her opening statement conveyed the whole objective behind the research conference. She emphasised upon the fact that it's not merely a contemporatry legal research but a contemporatry legal scholarship explaining the difference between the two to the house. She said such conferences are the great platforms for knowledge sharing & knowledge creation.

The felicitation of dignitaries on the dais & off the dais was followed by the Chancellor's address. In his address, Dr. S.B Mujumdar welcomed all the distinguished invitees including participants in the Conference and whole heartedly thanked Dr. Gurpur, for organizing this key seminar devoted to contemporary legal matters and legal scholarship. He elaborated on the necessity of such conferences involving UG, PG and Ph.D students and its relevance to the growth of society. Speaking about the evolution of legal education, he highlighted how the objectives of studying law changed with times from merely acquiring a degree to become a lawyer or a judge to a corporate lawyer and finally to the creation of knowledge as a researcher.

The Chief Guest, Dr. Sridhar in his address spoke about the importance of contemporary law and its new association with technology and finance and other diversified subjects. He said, "if you want to preserve your Law you will have to reform it and to reform it you will have to research it." Insisting on publication he said, "Either we publish and flourish or we perish." He said we have to pick up cues from the society and then research where ever required. He said academicians are the judges of the judges. He also stated that the lawyers have a great responsibility towards the society, as all constitution makers were the lawyers.

He closed by saying that we have to reach the goal of justice and it can be done through only one instrument ie, law.

Thereafter, Justice Bhat elucidated the importance of such legal seminars to meet with the ever changing nature of law. Discussing landmark judgments from A.K. Gopalan to Kesavnanda Bharti and all the way up to the Maneka Gandhi's case he explained the changing nature of law and its interpretation in the Constitution of India. It is because of such consistent changes in law the essence of fundamental rights have been upheld and glorified. He said we are in a cusp of changes therefore lawyers, academicians, judiciary and legislators will have to work together to create knowledge in tune with the changes in society.He further specifically stressed upon to have a synergy between the academia and the judiciary.

Then began the paper presentation by the Under Graduates, Post - Graduates and Research Scholars from various Law Schools of the country including NLSIU Bangalore, NLU Delhi, GLC Mumbai, Nari Gursahani Law College in their respective Tracks.

The Conference was held in two Parallel tracks. The tracks of the conference comprised of International Law and Human Rights, Public Law and Governance, Business Laws and Intellectual Property Laws.

The student researchers in their papers raised some very important issues before the house. Penalist of all the Tracks commended the efforts put in by all the students. They apprecited the researchers' choice of topics and they in their remark said that now we should stop looking towards west for every small and big things, our laws are not bad it's just that they have not been interpreted well. They said that we have to carry out an intensive research in the society to find out lacunas in the system and ensure that the law is made compatible to address all those issues.

The conference ended with Deputy Director Symbiosis Law School, Dr. Bindu Ronald giving her vote of thanks in which she thanked all the participants, the students and administration and also the dignitaries who shared their invaluable knowledge in their respective fields and hoped that this would be inspirational to all those present.

This Conference marked another major bid by Symbiosis Law School Pune in the quest for sharing knowledge and bringing together intellectual minds to work together on issues that the society and the world is dealing with today and in the process bring about solutions and provide groundwork for those solutions to grow and evolve to emphasize research tradition in legal education.

Along with the brainstorming sessions, audience enjoyed the beautiful photo exhibition arranged by the budding shutterbugs of Symbiosis Law School, Pune. It was an attempt to showcase the unrecognized creative skills of students along with their much recognized academic strength.