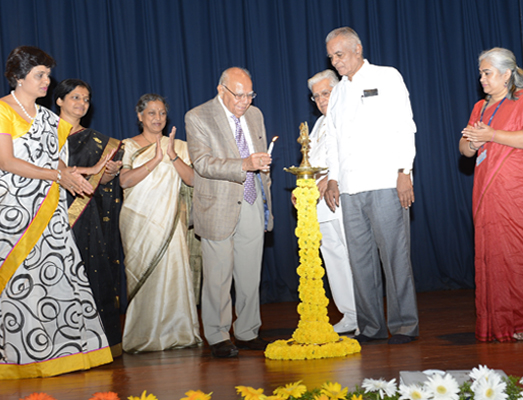 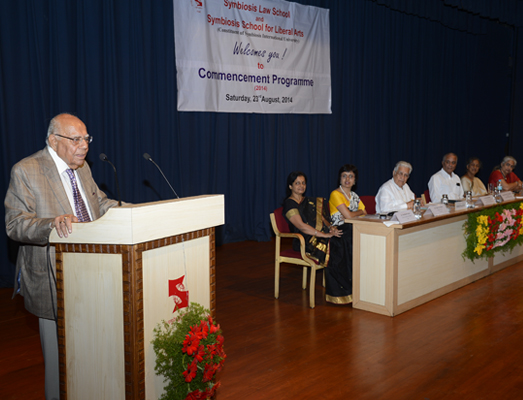 In the opening remarks, Dr. Shashikala Gurpur introduced not only the new batches, but also the new colossal campus at Viman Nagar. This year’s first year batch is making new history as it is the first batch of honours students of Law under a private domain, especially in Pune. On similar lines, liberal arts is standing against a hegemony of political hierarchy. The connection between Law and Liberal arts that Law is rigid, Liberal arts flexible, but the frame for the latter is provided by the former, was explained by the Director.

Dr. RajaniGupte pointed out the students present were from the oldest institute, i.e. Symbiosis Law School, Pune and the newest institute, i.e. Symbiosis School for Liberal Arts, of SIU and both the programs were set to scale greater heights. The new campus shall provide for a better environment and a wider scope for education. She also stressed on the digital world providing easier access to information and knowledge, in turn, making available more opportunities than earlier times.

Dr. Vidya Yeravdekar started by reminiscing that Viman Nagar used to be a barren land which was developed by Mr. Bahri Malhotra through his foundation and the Weikfeild Group of Industries. She also thanked Adv. Shri Ram Jethmalani profusely for supporting the institution through all its turmoil and struggles. She then moved on to the new campus and welcomed the new batches. Liberal arts and Law, both, are foundation courses which stimulate young minds. In most other courses students look for placements only for themselves, but in the former two, people look to help the nation as a whole. She also mentioned that Symbiosis Law School, Pune is one of the only institutions to conduct one-year LLM Program, and also excels in international collaborations with foreign universities.

Dr. S. B Majumdar urged to commence with a prayer. Majority of the students of SIU have come from outside Maharashtra. He gave them tips to take care of their health and keep fit, honour their time and be punctual. Along with issues like corruption and nepotism, there is a crisis of leaders, and hence we need courses like Liberal arts which have broad subjects that leave way for students to shape their own personalities, he said. He also urged the future lawyers to study an array of subjects to add quality to education as they should not be mere lawyers, but also architects of Law. This was followed by Mr. BahriB. R. Malhotra who briefly acknowledged the collaboration between Symbiosis and Weikfeild.

Advocate Shri Ram Jethmalani began his speech in his very typical style, with a joke. He was the 8thspeaker of the day and joked that he felt like Elizabeth Taylor’s 8th husband. He started off by saying that all the dignitaries on the dais were responsible for making Symbiosis International University the prestigious institution that it is today. He also made it a point to mention that of all the Law colleges he had seen all over the world, his judgement was right in saying that Symbiosis Law School, Pune was the best. He continued to say that he was more proud of being a teacher of Law, rather than a Lawyer. This stemmed from his misgivings about the profession of Law. He said that the only other profession in the country that is lower than Law is Politics. He went on to question the students’ decision to take up Law. He asked them to examine the difference between a profession and a business. He told them to understand that a profession was not meant for making money but rather for service. At this juncture in his speech he reiterated a statement made by President Adams calling Lawyers the reason for all the problems in the commonwealth. Sir also emphasised the importance of knowledge and how the search for it is similar to walking in the path of God. He moved on to point out the failure in the judicial system in the country due to the overtly complicated language of legislations and poor language used in judgements. Abraham Lincoln had once said that Judas and Jesus are equals in a courtroom and betting in favour of Judas would be higher. He ended with the story of Susannah and Daniel from the Bible. He mentioned that the lesson to be taken from this story is that justice can never be served unless the Lawyer can extract the truth from an unwilling witness. In closing he said that a Lawyer never asks for a fee. As always, his words managed to make a great impact on the audience and compelled them to look deeper into themselves.

The vote of thanks was delivered by Prof. Anita Patankar, Director, Symbiosis School for Liberal Arts. She extended her special thanks to Mr. Bahri B. R. Malhotra. She then moved on to expressing her gratitude to Advocate Shri Ram Jethmalani. She went on to thank the leadership at the institution of Symbiosis. She concluded by saying that educated people play a major role in improving the quality of life in today’s society.