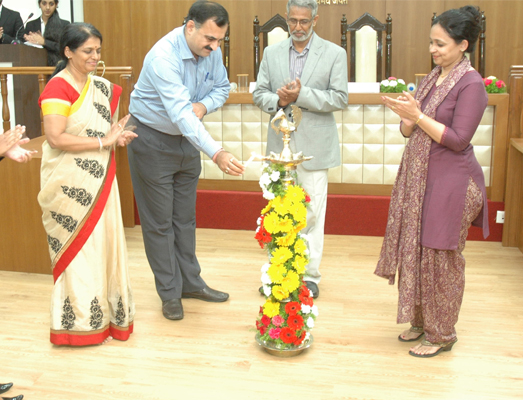 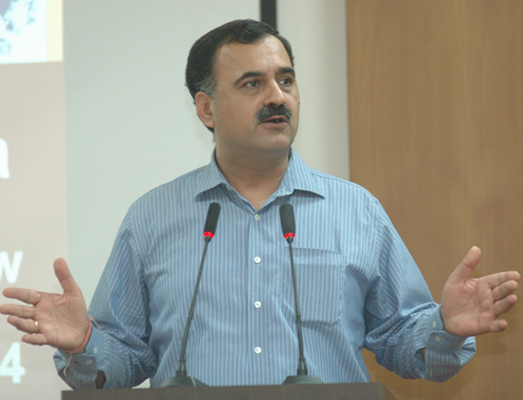 In his address, Adv. Pavan Duggal, gave his insightful opinion on the role of technology in our everyday life. He apprised the audience with the evils of social media and further went on to state cyber terrorism as today’s most stark reality. He spoke in great detail on the IT Act, cyber laws and other laws governing communication of information and technology. He concluded by highlighting the grave need and importance of cyber security today.

Dr. Gurpur in her Welcome Address extended a warm welcome to the assembled dignitaries and students while expressing her pride at having the privilege of hosting the 13th Surana & Surana International Technology Law Moot Court Competition, 2014. She briefly took the assembled audience through the history of the competition and its development into one of the most prestigious Moot Court Competitions in the country. She concluded her address by inviting the participants to return for the 14th edition in 2015 with renewed vigour.

Adv. Pramod Nair spoke about the importance of mooting for those pursuing a career in litigation and the value of learning to litigate under pressure which is something that only the experience of a Moot Court Competition like the 13th Surana & Surana International Technology Law Moot Court Competition can give.

Mrs. Aarti Dixit then took to the dais to express her views and share her thoughts on what was her first experience being a part of a Moot Court Competition such as 13thSurana&Surana International Technology Law Moot Court Competition. She then went on to trace the timeline of the evolution of India from the agricultural age of the past to the current technology-dominated era and the consequentially increased importance of an effective and detailed law with respect to technology today. She emphasized the need for the legal fraternity and the technology industry to collaborate and coordinate to resolve existing problems and deficiencies in the law with respect to technology today.

Chief Guest, Hon’ble Mrs. Justice Revati Mohite Dere, Bombay High Court, began her address by lauding Symbiosis Law School, Pune for the tremendous strides it had taken in the years since she was a student of the institution, passing many an appreciative remark on the new Vimaan Nagar campus for its technological and educational advancements. Recounting memories of her time with Symbiosis Law School, Pune, she pointed out the numerous advantages that are available to the students today as a part of the prestigious institution and urged the students to make full use of the same for their maximum benefit. Recognizing the increased popularity of the legal profession in India today, she expressed her fervent hope that the law student community of the country would take up litigation with greater seriousness. Speaking on a more personal note, she addressed the students of law in the audience directly when she elucidated the many emotional and temperamental necessities of being a truly complete lawyer. She spoke of the importance of precision, articulation, interpretation and a strict adherence to courtroom manners coupled with sensibility and humility as pre-requisites of being a good lawyer stating that one must strive to be, ‘A great judge, a great citizen and amongst all, a great human being.’

Dr. S. Ravichandran in his concluding remarks summarized the salient points from the previous addresses by the distinguished guests with respect to the importance of technology law. He went on to add that he was extremely impressed and gladdened to see the innovation and creativity of the arguments presented by the participants, stating that if this competition were any indication then the future of the legal profession of this country was in good hands. Following his address the esteemed advocate went on to announce the results of the 13th Surana & Surana International Technology Law Moot Court Competition, 2014.

The 4th place in the Moot Court Competition went to Ayushi Mishra, Kanika Sood and Purav Shah of National Law University, Jodhpur and 3rd place went to Himani Singh, Mohit Negi and Deepshri of Dr. Ram Manohar Lohia National University, Lucknow. Manya Tripathi was awarded the Best Speaker of the competition while Prabhpreet Singh, Raghuraj Sharma and Rakesh Choudhary of University Five Year Law College, University of Rajasthan, Jaipur went away with the ‘Spirit of Surana’ award. After a hard-fought final round where no quarter was given from either team, Anvesh Shrivastava, Manya Tripathi and Sohil Yadav of National Law University of Odisha were declared the Runners-up and K. Srinadan, Varsha Chandrashekhar and G. Annapooerani of School of Law, Sastra University, Tamil Nadu emerged the Winners of the 13th Surana & Surana International Technology Law Moot Court Competition, 2014. The winner team lifted the glittering trophy with a cash prize of Rs. 30,000/-.

At the end Dr. Bindu Ronald, Deputy Director, SLS, Pune, delivered the vote of thanks.